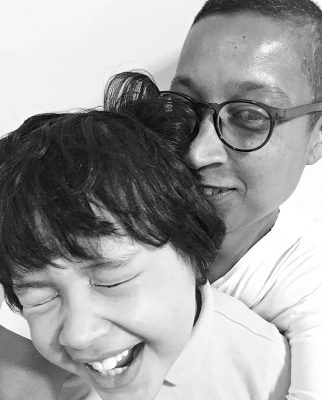 “On the 16th of December 2016, having spent an entire day in the dental hospital trying to work out why Dylan had a swollen cheek we were introduced to a senior paediatric consultant. He was absolutely lovely, so mild mannered and gentle. I remember him saying “it looks like Dylan will be under my care”. By this point I understood that Dylan was seriously ill but I still did not know exactly what was wrong with him. Earlier that afternoon another senior consultant had uttered the words “what is the worst thing you can imagine?” and I had fallen to my knees. However, I still knew that there were lots more tests to be done & I think a part of me thought that once the tests had been run then someone would tell me that it was not cancer. I was hoping against hope that there was still a chance that my son did not have cancer.

I remember my first exchange with a nurse, it was when I took a call that very evening after we had first been alerted to the potential gravity of Dylan’s still undiagnosed illness. The voice on the end of the line was very calm and softly spoken. She said that the consultant we had met earlier had asked for Dylan to go in that evening because “he needed hydration”. I thought it was so strange, he had been drinking water all day and could not possibly be dehydrated but of course we took him in & that was when we took our first walk down that long corridor.

As we walked I saw the sign that read “Children’s Oncology”…I had to Google the word oncology and even then I still had not quite grasped what on earth was happening. A friendly nurse took us into room 9 and Dylan immediately jumped on the bed and started playing with the buttons that move the bed up and down.  I would not say that I was in shock by this point, more emotionally suspended. Within the hour Dylan had a cannula fitted onto the back of his right hand and started to receive “hydration”.

The next day the consultant returned and took us into a small lounge whilst a nurse watched Dylan. Another nurse was in the small lounge with us and as the lovely mild mannered consultant found the words to tell us that our son has cancer and that they needed to run tests as soon as possible to determine what type of cancer it was, I was acutely aware of the nurse. As I was taking in the news I thought she must be there just in case one of us loses the plot and has a massive breakdown. Neither of us did that, instead we listened calmly, gripping each other’s hands, half nodding and half shaking our heads (I still shake my head today…regularly). I later learned that the nurse was there to listen to what the consultant was saying just in case we had any questions once he had gone.

In the five days waiting for the definitive diagnosis Dylan was subjected to all sorts of tests and procedures; throughout it all we had a nurse by our side, a consultant on hand and the gentlest of care from the staff. It was Christmas so the ward was draped in decorations, Father Christmas visited, famous football players popped in to say hello, the Welsh guards even made an appearance.

There were play therapists on hand to distract Dylan and to help explain to him in simple terms what procedure he would be undergoing next, talking him through how the MRI scanner worked, giving him a choice of film to watch whilst he was in said scanner for over two hours.
There was a playroom filled with toys and games and lots of bald children with cancer.
There were the porters who chirpily wheeled Dylan in his hospital bed from one part of the building to another, or who pushed him whilst sitting on my knee in a wheelchair to get to the X-ray/CT scan department. I remember bumping into one of the porters months after he had taken Dylan to one of his many procedures and he stopped me and asked “how’s that little lad of yours doing?” I was so touched that he had remembered us.
There were the ladies who brought up the breakfast, lunch, dinner and snack trollies and would then come in quietly to remove the trays of often uneaten food from Dylan’s room.
There were the cleaners who would gently knock on our door before they came in to quietly clean the room and empty the bins all whilst trying hard not to disturb us.
There was a television in our room, a game station, a pull down bed for me to sleep on (although I spent the first fifteen nights we were there in Dylan’s bed just holding him)…I barely slept. All the while the nurses would be in and out either to administer medication, take Dylan’s temperature, blood pressure and heart rate and to check to see how we were doing.

I remember one night, coming out of Dylan’s room and just bursting into tears. One of the nurses took me to one side, gave me the biggest hug and amongst other things told me I could do this…I will never forget that. Months later whilst we were waiting in the clinic to see a consultant before Dylan had yet more chemotherapy, I remember seeing that same nurse rush past holding back tears. I later learnt from another parent that one of the children she had been looking after had passed away.

The Noah’s Ark Children’s Hospital for Wales is one of nineteen principal treatment centres within the UK; they specialise in childhood cancer. We are very lucky to live so close. Dylan is now an outpatient so is treated in “daybeds” which is on the same ward but he is looked after by a different set of nurses to the ones where the children are admitted. Each time we go in, many of the nurses pop down from inpatients to daybeds to see him and spend time talking to him amd us.

Daybeds is busy, sometimes the lists are too long to see everyone so they have to reschedule treatment for some of the children who are on maintenance. The nurses are incredible; I honestly do not think I will ever find the words to properly do them justice. They are the mainstay of Dylan’s care. They have to deal with very ill screaming babies and children, they have to deal with the gravely concerned parents of very sick children and they also have to prepare and administer a plethora of different medications and chemotherapies amongst millions of other things. Whilst they are doing all of this and more, they are constantly smiling, constantly cracking jokes, constantly making the children laugh and constantly making sure us parents are all ok too. The complexity of these skills is endless; it is an invaluable asset to be able to do all of this at once and remain so professional.

I remember being on daybeds with Dylan once and I was just so overwhelmed with emotion that I had to leave the ward, a nurse clocked me and followed me out. As I sobbed heavily on her shoulder I said to her “I don’t know how you do this, how do you do this day in and day out? How do you manage to keep it together with so many seriously ill children here?” She hugged me and said “We do it because we care about these kids, because we want to make them better. We do it for you.”

Today the NHS turns seventy. Apart from giving birth twice my visits to hospital were far and few between. Since Dylan’s diagnosis I have lost count of how many days and nights he has spent in hospital, being cared for by an unbelievably talented, committed and caring group of people.

I am eternally indebted to the remarkable efforts that each and every one of these people make every single day.”