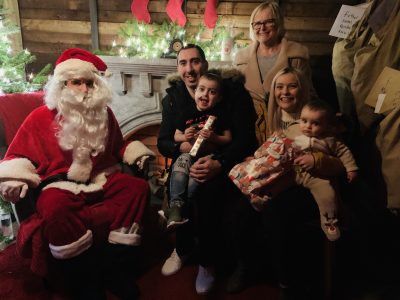 This time 19 weeks ago, Kirsty and Stewart were like any other young family, balancing their lives as working parents with the needs of their growing family.  Stewart was working full time as a police officer while Kirsty was regularly checking in on her business while taking a break following the birth of their second son, Cameron. They were enjoying their summer as a family before three-year-old Caleb started school in September.

Then one day in August, life changed.  Caleb, who had been at home with Stewart, suddenly started shaking uncontrollably. Stewart went straight to the GP surgery where a now recovered Caleb was examined and sent home with reassurance that isolated fits were not uncommon in children but a follow up appointment would be arranged just to be sure.  But Caleb didn’t make it home.  On a detour trip to McDonalds for a post doctors treat, Caleb suffered a series of stronger seizures.  Panicked and with baby Cameron in the car with them, Stewart was helped by a passing nurse who rang an ambulance, telling the caller to rank the call as a priority emergency.

In hospital, Caleb was put on to antibiotics and antivirals and admitted on to Jungle Ward where the three-year-old underwent a series of MRIs, lumbar punctures and CT scans in an attempt to diagnose the problem. Each set of test results came back clear yet his seizures were increasing and getting worse.

Stewart says: “Whatever it was that started that day in August just kept on coming and hasn’t stopped since and in that time every part of our lives has changed.  We spent the first month in hospital full time and have pretty much been in more than out ever since.  Caleb isn’t responding to any anti-epileptic drugs and there seems to be no pattern or obviously triggers to his seizures.  He can sometimes go four or five days without one and then have up to 15 in one day. Twice he’s gone in to what’s called a non-convulsive status which is the scariest thing of all.  The best way I can describe it is that the lights are in but there’s nobody home.  His eyes are open but he can’t move or communicate.  He can be like that for a few days at a time and all we can do is sit and wait. We’ve got no idea if he’ll ever come out of it or whether we’ll have the same child as we did before.” 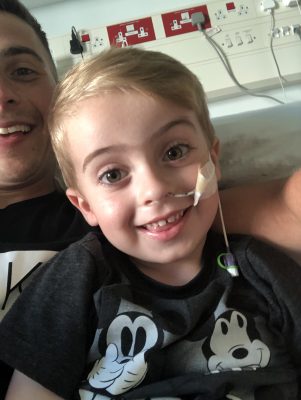 Having spent most of their time with Caleb in hospital over the last 19 weeks, family life has changed completely too.  Baby Cameron hasn’t spent a night at home since Caleb first fell ill and is instead cared for by his grandparents.  Even when they’re at home it’s not safe for the family to be together because Cameron waking at night can trigger one of Caleb’s fits and then both parents are needed to bring Caleb to hospital.  Stewart’s work have been great, as have the staff at Kirsty’s hair salon but without any clear diagnosis or successful treatment to date, they’re both very aware that they can’t keep the other realities of life at bay forever.

The worst thing by far for Kirsty and Stewart though is the uncertainty of what the future holds for their son. Kirsty says: “We’re living life in this horrible limbo, not knowing what’s going to come next or how to make things better for Caleb.  We go through these highs when it looks like a new medication has worked and the seizures subside, followed by this anxious lull where we’re constantly on guard praying that they’ll stay away.  And then finally, the seizures come back, and we’re back in crisis mode again.   Sometimes we lose track of how many seizures he’ll have in a day because they come in clusters.

“He’s on so many medications now to try and control his symptoms that I almost lose track.  I feel like we’re forever giving him something.  And although he’s dealt with it all with the biggest characteristic smile on his face and he’s still our Caleb, the medication has changed parts of his personality.  The steroids have made him hyperactive and he has absolutely no sense of risk at all any more. He’d gladly go off with a stranger or put himself in physical danger so we have to watch him like a hawk.

Caleb has now started a special diet called Keto which has been successful in controlling types of epilepsy that are resistant to other medications. In the New Year, the family will also travel to Great Ormond Street in London for further investigation in the hope that Caleb’s condition can be resolved and the family can return back to the normal life they miss.

Caleb spent his fourth birthday in hospital and recently mum, Kirsty celebrated her 30th birthday on Jungle ward by collecting donations instead of gifts for the Jungle Ward Appeal.  Kirsty says: “We’re supporting the Jungle Ward Appeal because we’ve spent so much time there and understand what it’s like for families like ours. To have a new ward would make such a difference. To have better facilities for cooking and space to take time out for a bit of normality and rehabilitation facilities for children like Caleb would be wonderful.”

To make a donation to the Jungle Ward Appeal click here