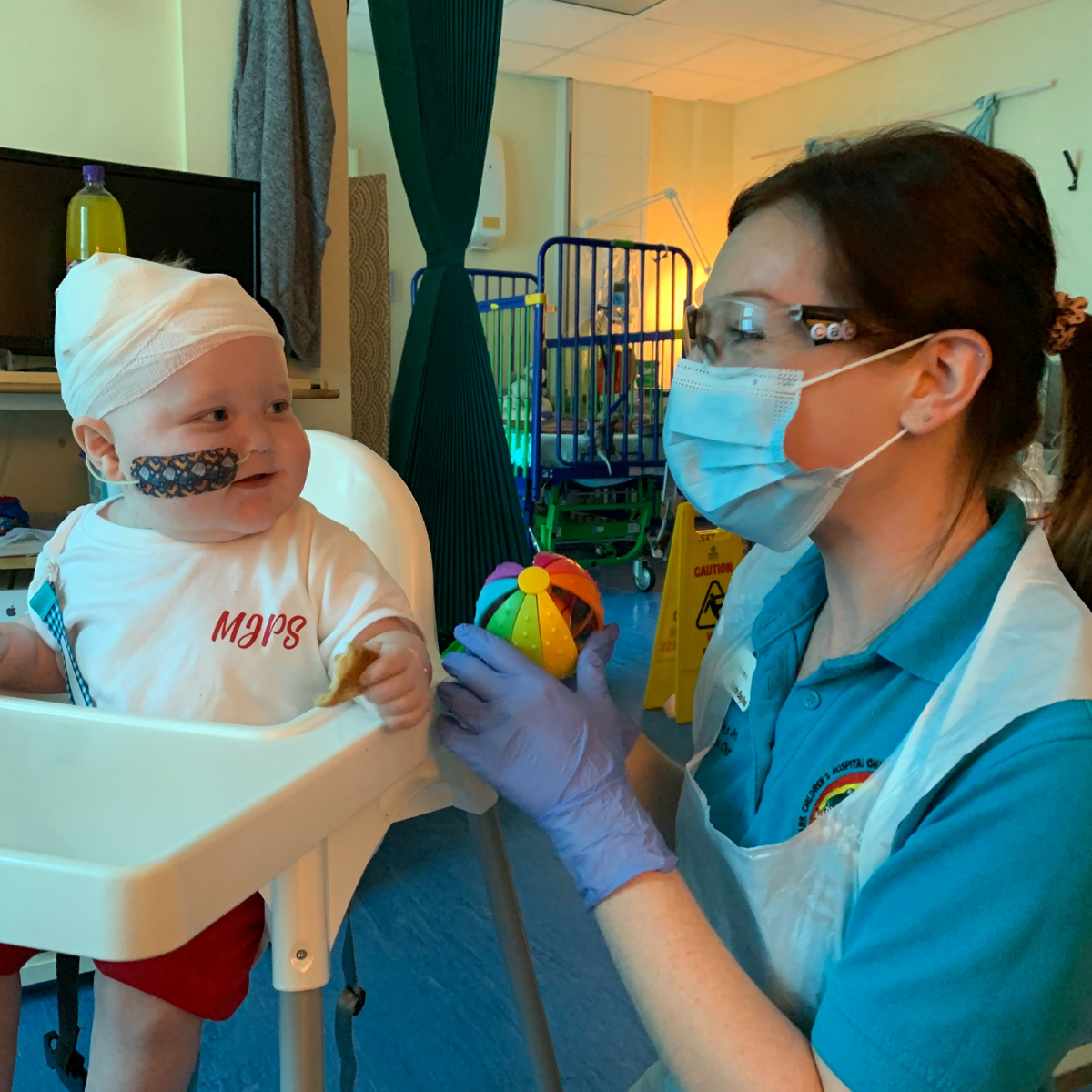 One-year-old Myles is a little ray of sunshine.  Watching him hurtle down the ward in his baby walker, smiling at everyone he sees, you would never imagine the challenges he’s faced in his short little life.  Or the immense journey his doting parents, Natasha and Jonathon have been on with him.

On the 13th of March this year, while the rest of us focused on a pandemic that crept closer to home every day, Natasha, Jonathon and then five-month-old Myles left their home in Swansea for Newport to visit Natasha’s dad, who had suddenly fallen ill. What they didn’t know at the time is that they wouldn’t return for more than eight months!

Natasha’s dad was diagnosed with liver and lung cancer and three days later, he passed away. On her first Mother’s Day as a mum, just a few days after her father’s death, a devastated Natasha found a lump on baby Myles ribs. Though reluctant to return to the place which held such raw memories from her father’s illness, Natasha took to her son to hospital to be checked. Myles was diagnosed with a cyst and his parents were told to return in a month.  But over the weeks that followed, a usually happy and content baby Myles began to change. On the morning of the 20th of April, his parents woke up to find him pale and very lethargic. Worried that he’d somehow contracted Covid-19, they rang 111. An ambulance arrived outside the house within 3 minutes.

Natasha says: “I’ve got to say at that point I wasn’t overly worried. I think I was still numb from the shock of losing my dad if I’m honest.  But when we got to the hospital and saw the doctors rushing to get a line in to him and failing I did start to get scared. It wasn’t until the consultant came in to the waiting room and asked us to sit down that I really panicked though.  It was almost an exact re-run of what had happened with my dad just a few weeks before and at that point I knew it was bad.  I just kept saying “I can’t do this again, I can’t do this again.” 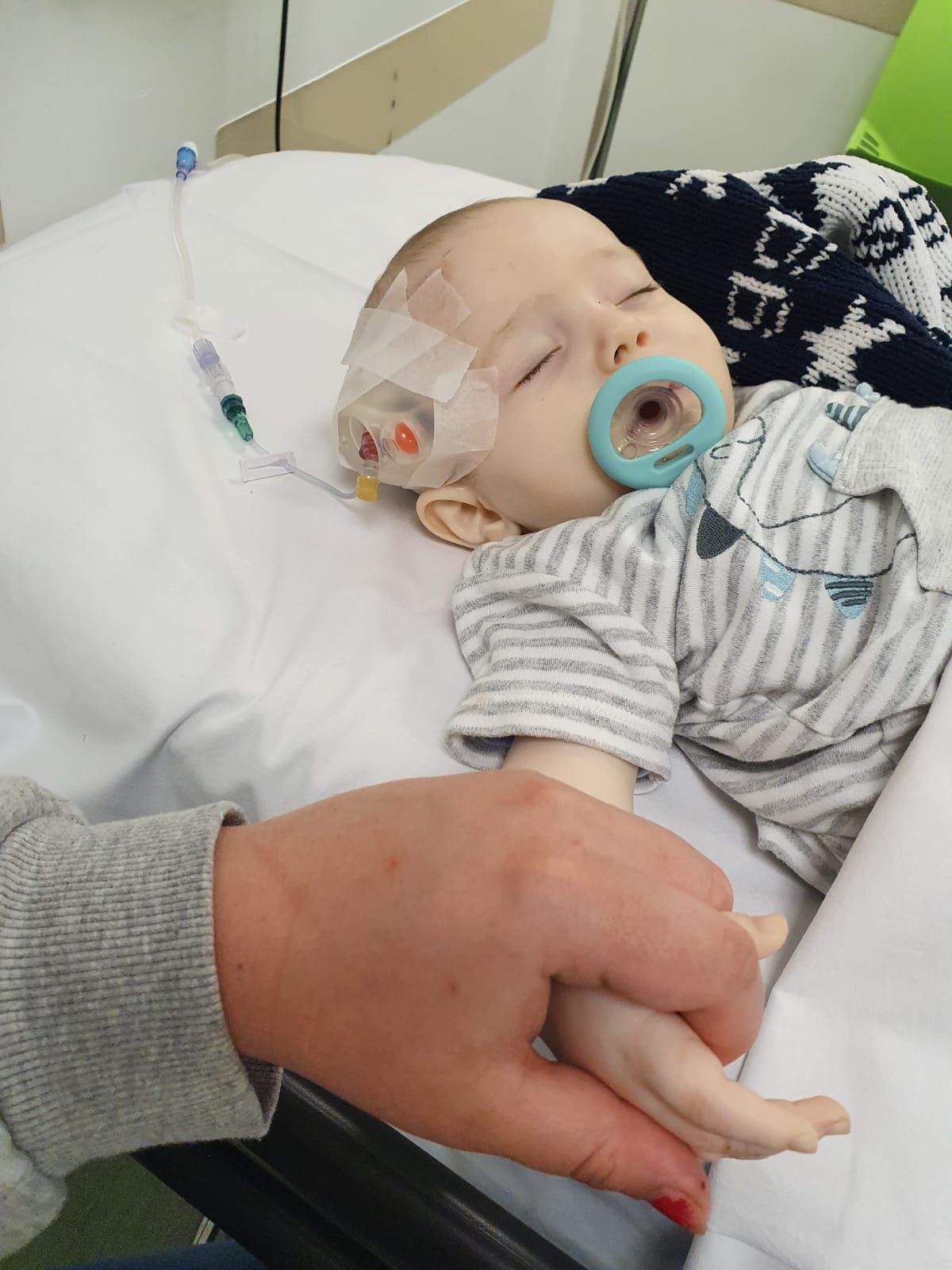 Myles was rushed to the Noah’s Ark Children’s Hospital for Wales where a diagnosis of acute lymphoblastic leukemia (ALL) was confirmed.  He was given an emergency blood transfusion and the following day, the tiny 5-month-old was taken down to theatre to insert a hickman line in preparation for eight months of intense chemotherapy. It was around this point that the family met Rainbow ward play specialists, Catrin and Alison.

Natasha says: “It’s hard to explain how lost and useless you feel in those first few days after diagnosis.  You’re used to doing everything and knowing everything about your baby and suddenly that’s all taken away.

“But Catrin and Alison helped me feel less lost. They started by explaining all the complicated jargon and procedures, taking us through it all step by step using a mannequin doll so we knew what to expect when the chemo started and how it all worked.  They were also there to support me through the emotional stuff too.  Because of Covid, Jonathon and I haven’t been able to stay together with Myles and we’re not able to have friends and family visit.  We have to take it in turns to be with him which means that practical things like having a shower and getting some food is difficult. But we aren’t there to support each other through the scary and hard times either.  Catrin and Alison have been like family to us through all this, helping us in whatever way needed.  I think I would have gone mad without them.” 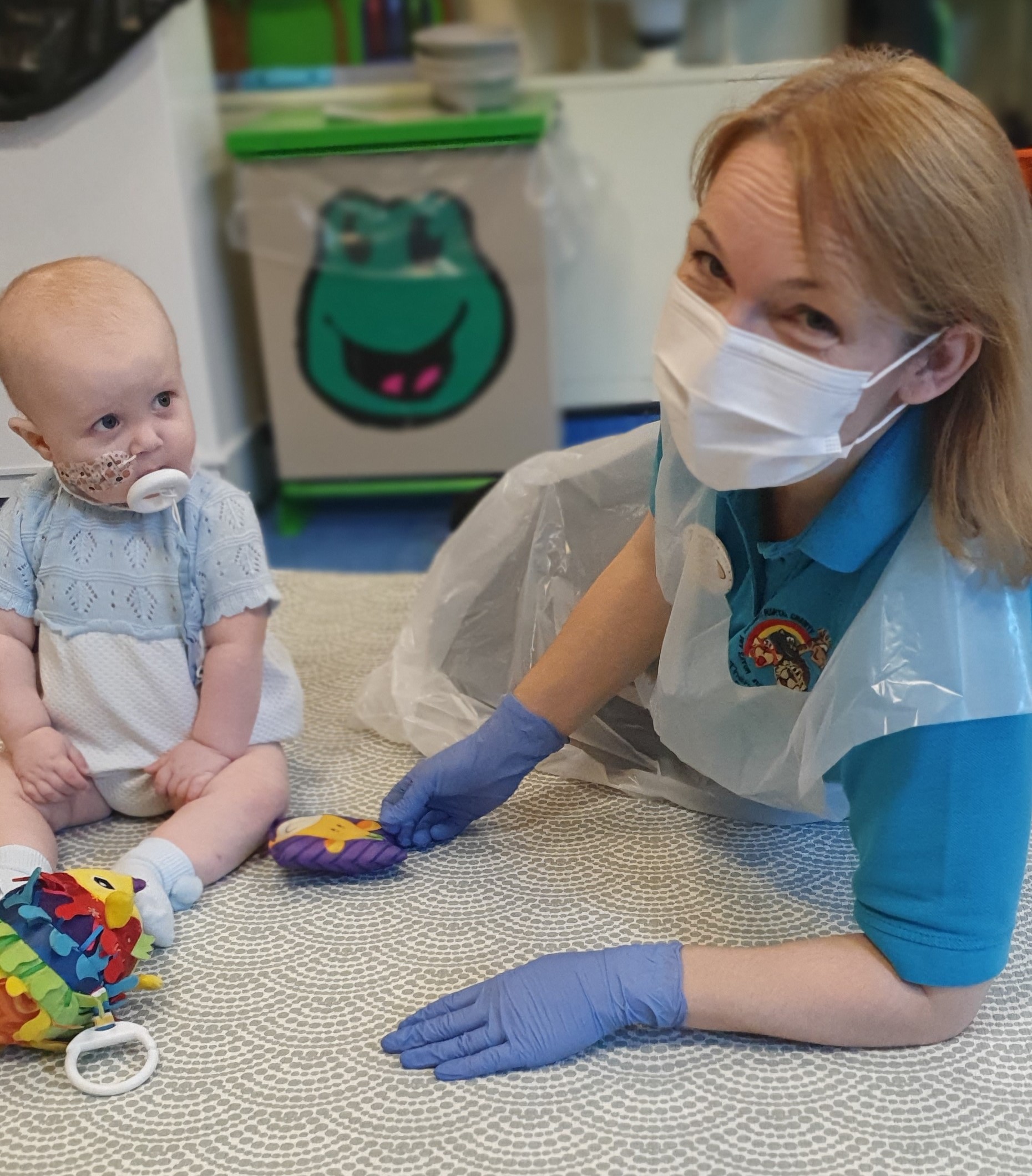 Families like Myles’ face months of difficult treatment and even in normal times, days in hospital feel long.  But during Covid 19, hospital life has become even harder. Play specialist Catrin, explains: “In normal times parents get support from each other and extended family and there’s always things for children to join in with in the play room to distract them from treatment and brighten their day.  But with the play rooms closed and the one parent only policy in place, there aren’t those opportunities.  As play specialists, our roles have had to adapt.  We still prepare and support children and parents through treatment and provide developmental play but we now have to take play to the bedside instead and provide much more of the practical and emotional support that these families desperately need. ”

Over the months of Myles’ treatment, Catrin and Alison have used play to counteract some of the harsh side effects of the chemotherapy like using games to help strengthen his weak muscles. It’s thanks to them Natasha says, that Myles eventually learnt to sit up. It’s also thanks to their support she says that, as a mum, she got through one of her toughest challenges yet.

Natasha says: “For Myles, this is the only home he remembers.  He started moving, talking and eating here so in a way it’s only fitting that he celebrated his first birthday here too. I just wish that wonderful day hadn’t been followed by such a frightening one.”

Right towards the end of Myles’ eight month block of chemotherapy and a day after his first birthday celebrations, Natasha noticed that Myles appeared to be holding his breath in his sleep and called the nurse to take a look. Within minutes there were 15 people at Myles’ bedside. His temperature was spiking, his heart rate was rising and his blood pressure was dropping rapidly.

“I stood in the corner of his room shaking as the crash trolley was called and they ran up the corridor with him to PCCU.  I just couldn’t understand how he could go from seemingly ok to critically unwell in the space of ten minutes. I really thought at that point that I was losing him.”

“When I saw Myles again on PCCU he was sedated and on a ventilator and we were told he’d developed sepsis from an infection in his hickman line.  I had silent tears running down my face when I saw him.  But I was in mum mode and I didn’t want him to hear the upset in my voice so I kept it upbeat.”

Myles’ chemotherapy had to stop while he was stabilised and treated for the infection but he was eventually well enough to return to Rainbow ward and finish his course.

Natasha says: “Once again, Catrin and Alison were there to get us back to a sense of normality – or at least our version of that. They worked around the monitors and sats machines he was attached to, making it possible for him to play again after such a horrible experience.  It was amazing to see him being a happy playful baby again after seeing him wired up and unconscious and a massive relief knowing that we were back in the familiar support system of our little Rainbow ward family.” 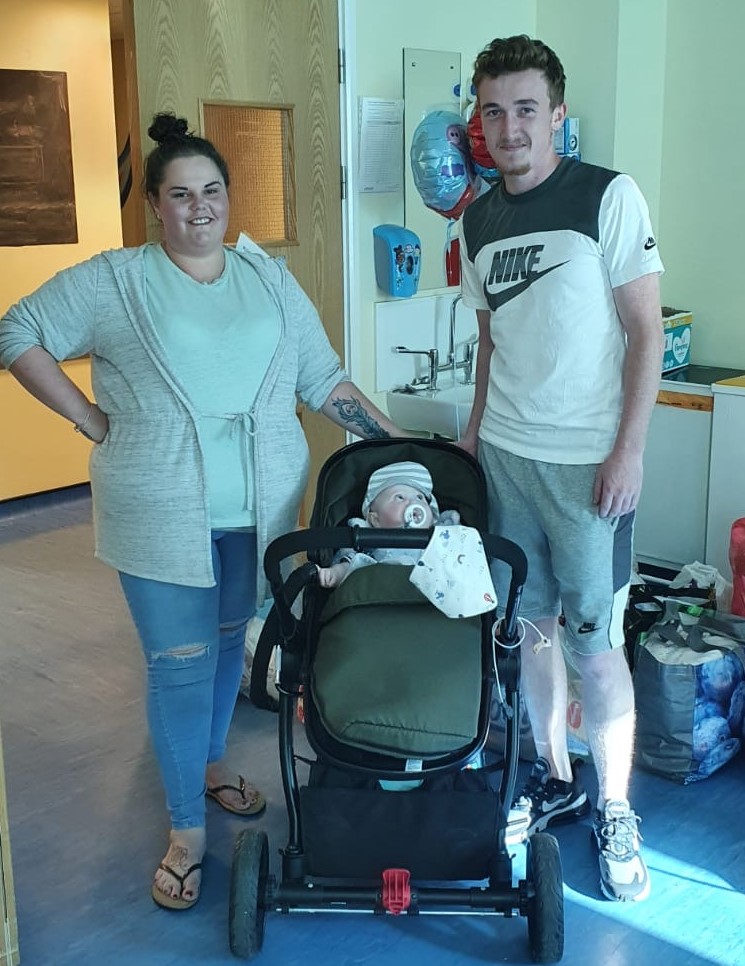 Finally, after more than eight months in hospital, Myles is finally back home in Swansea but will return as a day patient for maintenance chemotherapy for the next 18 months. Natasha says it feels like a dream to be home again but that the people that pulled her through are never far from her thoughts.
Play specialist, Catrin, says: “Our role in providing support to patient and parent wellbeing is more important than ever. Our families were already facing the hardest challenges they’d ever had to with their child receiving oncology treatment before this pandemic hit. Covid-19 has brought new limitations to their journey, meaning our role has had to adapt to support them further in new ways to continue providing holistic care.”

This week, during Big Give Christmas Challenge week, we’re raising funds to help ensure that play specialists like Catrin and Alison can help many more families’ like Myles’.  Between 1 – 8 December, any money you donate in support of the play specialist team will be DOUBLED. To find out more, to watch a film about Myles’ journey and to donate, click here.