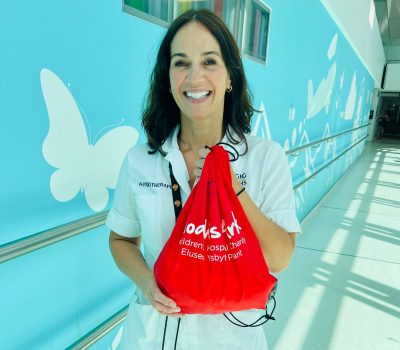 Not all hospital admissions are planned, some happen in an emergency. In those cases, a parent or carer’s only thought is for the welfare of their child and they often turn up in hospital without anything for themselves.
The Noah’s Ark Charity provides little bags of comfort to parents and carers in these situations, filled with things like a change of t-shirt a toothbrush and body wash to get them through those first few days.
Physiotherapist, Mez, is no stranger to an emergency having worked on both adult and children’s intensive care units for 24 years. But when her eleven-year-old son was sent to the children’s hospital in a great deal of pain and later admitted for emergency surgery, she says she hadn’t given a second thought to anything she might need to bring with her.
Mez says: “A few weeks ago I took my son to the GP and got sent straight to the hospital. Although I live locally there was no time to pop home to grab a bag and my priority was getting my son to the hospital asap. He had surgery that night and thankfully he was fine.
“Having the parent pack and being able to brush my teeth and change into a clean t-shirt felt like luxury. It also meant that I didn’t have to trouble a family member to bring a bag of essentials, leaving them free to look after my other son.
“In an emergency it’s the simple things that you’re grateful for. I can only imagine how helpful it is for families that live far away or who have a longer stay to be given these essentials.”
It’s your donations and fundraising that makes it possible for us to support families in ways like this. Thank you.