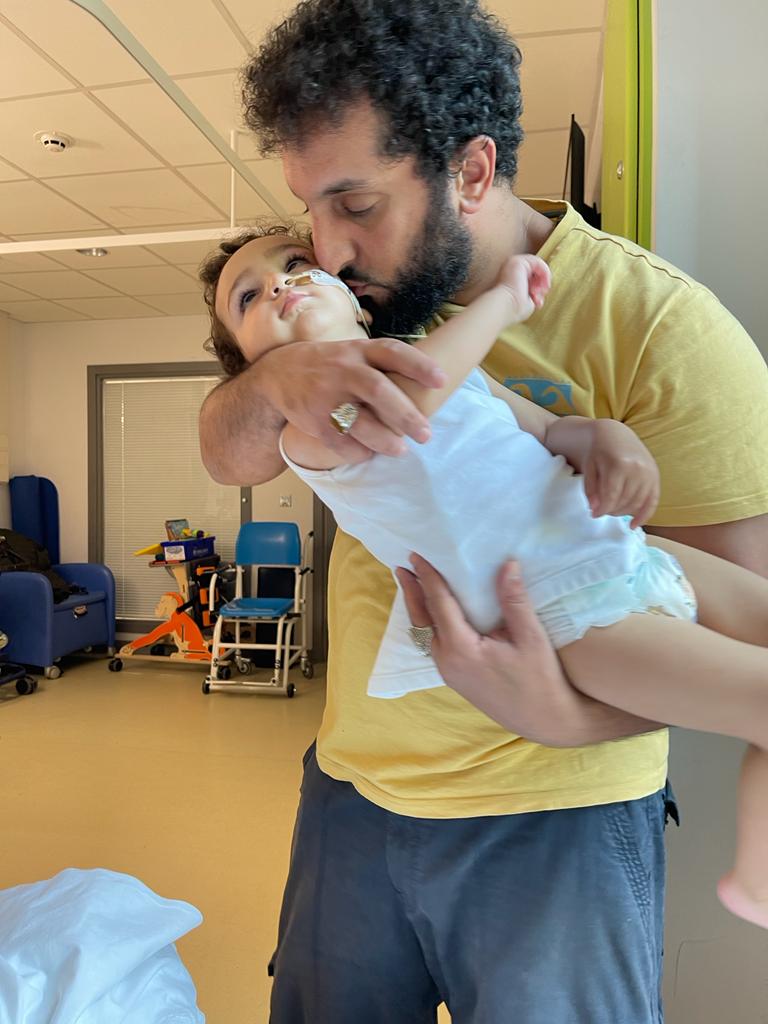 Two-year-old Weeam has been an inpatient at the Noah’s Ark Children’s Hospital for Wales since August. It’s been a very difficult four months for Weeam but now, thanks to the tireless efforts of both his family and the multi-disciplinary team who care for him, Weeam is making huge progress.

Parents, Nizar and Hanadi, first noticed that something wasn’t right with their son when he began to lose weight. Weeam also started spiking high temperatures and appeared to be short of breath.

Concerned, Nizar and Hanadi took Weeam to Morriston Hospital where he was admitted for investigation. A few weeks later, the family were told that Weeam had severe combined immunodeficiency (SCID), a group of rare, inherited disorders that cause major abnormalities of the immune system. Children with SCID appear healthy at birth but are highly susceptible to severe infections which can have devastating consequences if left untreated. Weeam’s diagnosis is made worse by the fact that he has a MHC class ii deficiency, which is even rarer and potentially fatal.

Weeam had four viruses’ when he was first admitted to hospital – coronavirus, RSV, norovirus, and rhino virus. The combination of all four viruses made him incredibly ill and he developed pneumonia. With Weeam’s body unable to fight off infection, he became paralysed and unresponsive. 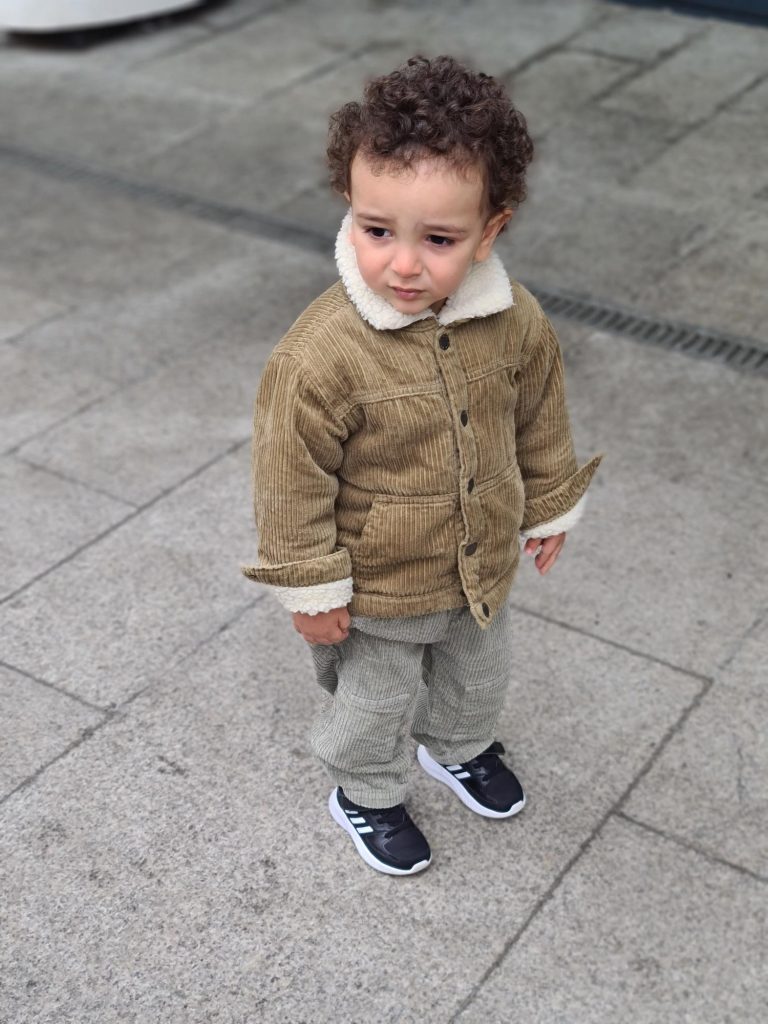 Lying in bed unable to move or communicate, a multi-disciplinary team of play specialists, occupational therapy, and physiotherapy, decided to work together to get the most out of Weeam without exhausting him. At this point, he was sleeping for most of the day and when he was awake, was too weak to benefit from all the input he needed for rehabilitation. Working together, play specialist, Juliet and her physio and OT colleagues worked together to encourage Weeam to regain the use in his arms and legs.

They also worked together to improve Weeam’s cognition by encourage him to respond to commands through play. The three disciplines rarely come together within the same session but it’s a combination that’s worked really well for Weeam.

Over the months,  Weeam has improved tremendously – from the little boy who could only move his eyes to the mischievous little toddler who loves to splash Juliet and Nizar during water play.

Juliet, whose role is funded by people like you, said: “It really has been a united effort on everyone’s part.  Having the occupational health and physio teams there to position Weeam during his sessions allows Nazir and I to focus solely on play. At the beginning of his stay here, Weeam was given a weighted blanket by the Noah’s Ark Charity because his body tremors were so bad.  At that point all he was able to do was occasionally look at the things going on around him.  Now Weeam can concentrate and focus his attention and complete movements on command. He is such a pleasure to be around and is always smiling.  He is just the cheekiest boy who loves to splash or knock over building blocks. He’s come on so much over the last few months we are all so proud of him.” 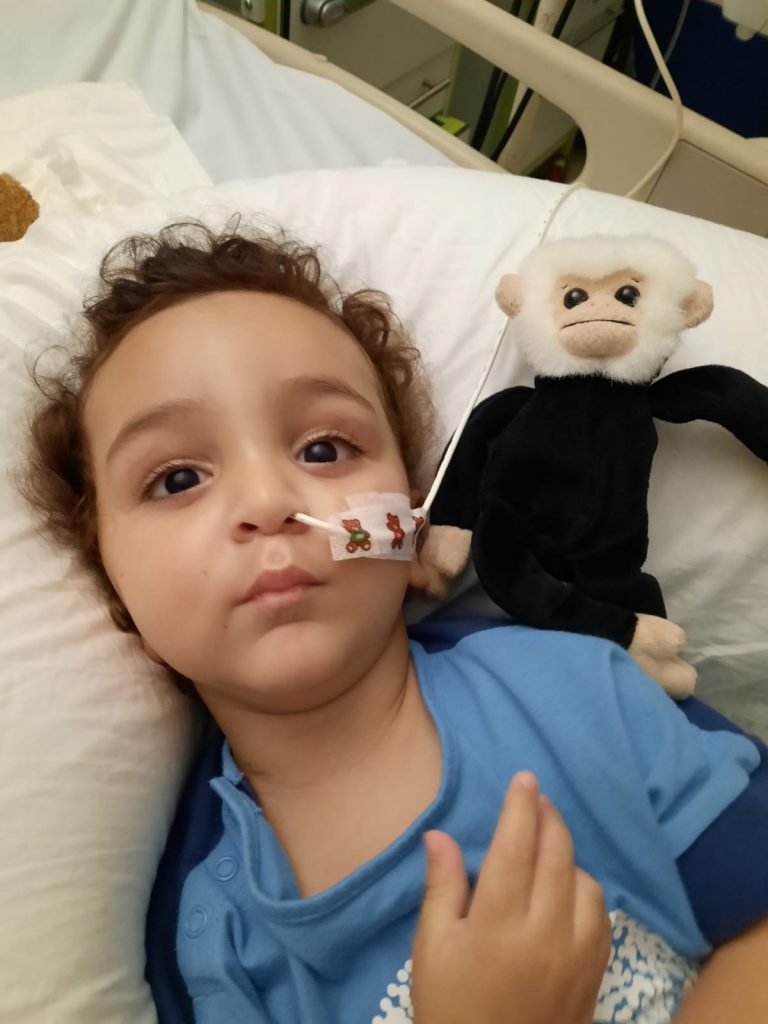 Dad, Nizar, said: “We still have a long way to go to get Weeam to where he needs to be but Juliet and the whole team have been amazing and so helpful with Weeam’s recovery. We can’t thank them enough.

The next step for Weeam is a potential bone marrow transplant or blood stem cell transplant which could replace his current immune system with a new, healthy one. The family are awaiting the result of further testing to decide whether Weeam is clinically stable enough for transplant.  If he is, he will then travel to Newcastle in the coming weeks to determine whether he is a suitable candidate.

The Noah’s Ark Charity is currently running an appeal to provide an emotional support service for families at the Noah’s Ark Children’s Hospital for Wales.