Eight-year-old Amelia and her mum, Elizabeth, know Jungle ward as well as any nurse or doctor. They’ve been frequent fixtures there for the last few years, often staying for weeks on end.

Amelia has a rare condition called HNRNPU, a neurodevelopmental disorder that causes severe epilepsy. As a relatively newly discovered condition, there are currently only 70 known cases in the world, all of which are children. There are many different mutations of the disorder and Amelia is one of only three with the same one. Sadly she is the only child that doesn’t respond to any form of treatment. Her hospital team do everything they can to manage her symptoms to give her the best possible quality of life, but her condition is life-limiting and she isn’t expected to reach her 18th birthday. 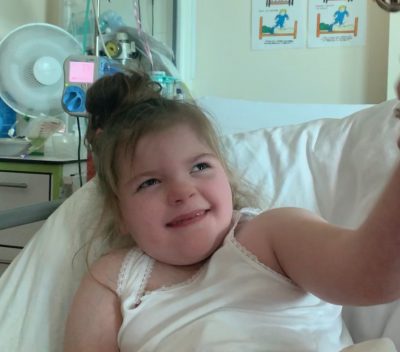 Amelia started having seizures at a year-and-a-half and was diagnosed with a brain condition called PVL, a symptom of which is epilepsy. She was put on medication that initially seemed to keep things under control but at the age of five she started to experience smaller, more frequent seizures. A CT scan at the local A&E revealed that, though Amelia’s body was showing no outward sign, her brain was almost permanently fitting. She was rushed to the Noah’s Ark Children’s Hospital where she spent two weeks in a coma like state. Unconvinced that Amelia’s severe symptoms matched her PVL diagnosis, her consultant decided to conduct a series of genetic tests. Though the medical team kept trying to find a medication that worked for Amelia during this time, her seizures kept returning.

Elizabeth says: “Though she was never as steady on her feet as my other children had been at the same ages, Amelia had been able to make her way around, feed herself and communicate well enough to go to school before the seizures started getting really bad. But each seizure damages her brain a little more and she stops being able to do something she was previously able to. She’s going downhill physically too. She’s partially sighted and partially deaf and her small bowel isn’t functioning properly either now.”

Amelia’s diagnosis of HNRNPU came last summer and in September, having exhausted all avenues of treatment, her parents were put in touch with the palliative care team. She’s been back on Jungle ward several times since then which is tough for her mum to manage with three other children at home.

Elisabeth says: “The bad news is hard to hear and sometimes I don’t think it hits me straight away. I just try and keep focussed on the things we can to for Amelia. She loves baths and bubbles and old films and music and she smiles when she sees her favourite people so we just try to get as much of that in as possible. The staff here on Jungle Ward are incredible but I think the new ward will make such a difference to families like ours. To have sensory equipment and facilities to stimulate Ameila so we can enjoy the time we have together would be amazing.”

The Jungle Ward Appeal will also fund a re-design of the ward, making it specific to the needs of the children cared for there. In the case of complex needs children like Amelia, this would mean more space around her bedside for a wheelchair and equipment she needs. The appeal would also fund hoists and purpose built bathroom so that she can enjoy the baths that she so loves at home.