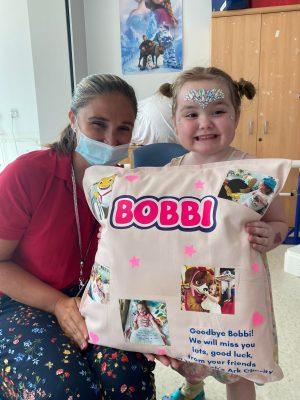 Do you remember four-year-old Bobbi who we posted about a few months ago?  Well, after four long months in hospital, she’s finally going home for good having learnt to walk and begin to talk again!

Back in March, Bobbi woke up one morning and was not her usual happy and chatty self. Later that day she had a series of seizures within a five-minute period. She was rushed to hospital, put into a medically induced coma, and transferred to the Noah’s Ark Children’s Hospital for Wales.

Bobbi was diagnosed with autoimmune encephalitis, a rare neurological condition causing inflammation of the brain. She spent just under a week on PCCU before being transferred on to Island ward where she underwent a 12-week rehabilitation program. Despite not being able to speak,  Bobbi’s personality has always shone through, and she lights up around Nico and Autumn the therapy dogs or when mascots Skye, Baby Shark or Sparkles the unicorn pay her a visit.

During her time in hospital, Bobbi has come on leaps and bounds, learning to walk and start talking all over again. Mum Elly says: “Hearing Bobbi speak again after four months was so emotional, it’s been such a roller coaster to get her to this point with more left to go. We would not have been able to do this without you all. You have all been so amazing, the things both the hospital and charity have done for her has been incredible. 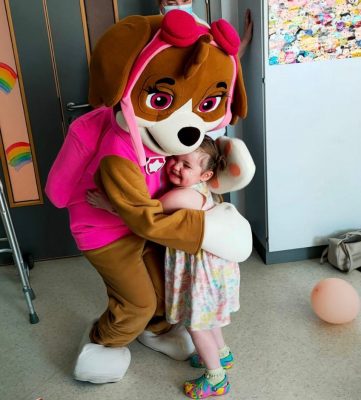 “It’s such a bittersweet day, we’re so happy to be finally taking Bobbi home but we will miss you all so much.”

To celebrate Bobbi leaving Island Ward to continue her recovery at home, we helped the hospital team to arrange a farewell party with pink glitter cupcakes, glitter tattoos and a visit from her favourite mascot, Skye from Paw Patrol.

Donations made by people like you have helped to fund life-saving equipment on PCCU where Bobbi spent her first few days. It funds the play specialist service who kept Bobbi happy and motivated during her long stay in hospital and the sensory room on Island ward where she enjoyed some of her physio sessions. Your support also made it possible for the charity to arrange fun things for Bobbi like visits from therapy dog, Nico, and some of her favourite characters.

We’ll miss you on Island Ward Bobbi. We can’t wait for more updates on your speech and to hear you bossing your family around very soon!