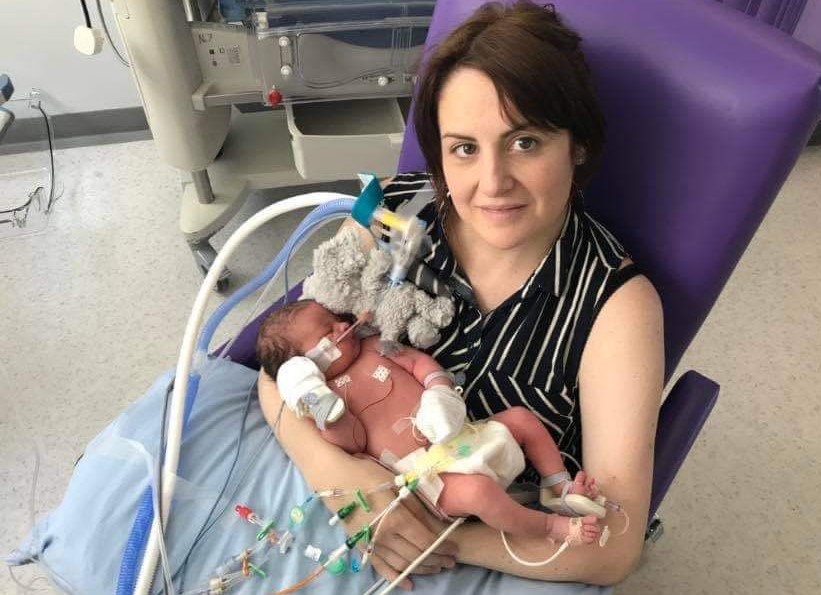 Most people know that neonatal intensive care units (NICU) are places where premature babies go to grow and get strong. But what’s less widely known is that a significant amount of babies who receive life-saving care on NICU are born full term  – sometimes with no warning at all beforehand that anything could be wrong. In cases like this, new parents have to adapt very quickly from the post-birth experience they’ve imagined, as plans for going home outfits and joyful birth announcements turn in to hours of sitting at a cotside anxiously awaiting the next set of test results. For many NICU families, the hospital journey also extends way beyond those initial first weeks or months as ongoing medical issues can result in admissions and outpatient appointment visits for many years to come.

The Rees family had very little experience of hospital life before the birth of baby Florence who arrived in May 2018.  Her second complication free pregnancy following the birth of their first child, Seb, mum, Beth, still felt hugely relieved when her healthy looking baby girl was put safely in to her arms after a straightforward delivery.  Mum and baby were taken back to the ward to recover but only a few hours later, Flo’s breathing suddenly changed. She was taken to NICU for observation and, as her blood oxygen levels had started to drop, was then placed on a high flow ventilator for support. Despite their obvious concern, Beth says for that first 24 hours, Flo still seemed by far the most well baby on the ward. 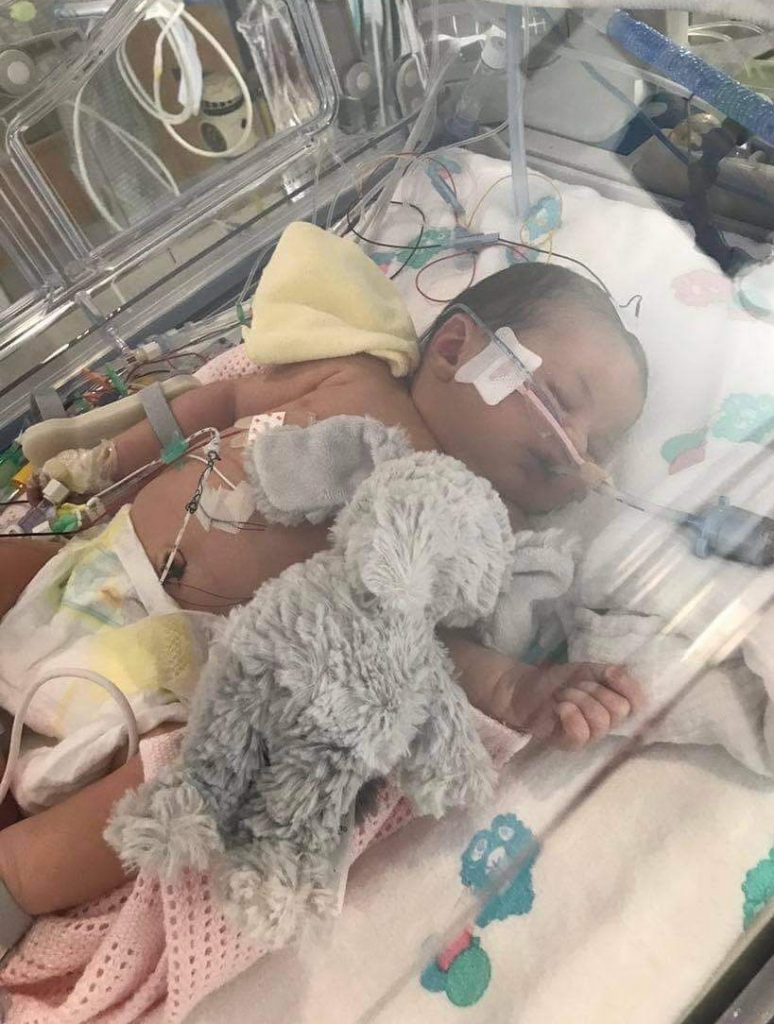 But that all changed suddenly early on day two when Flo had her first seizure in dad, Stuart’s arms.  During the course of the next few hours, Flo’s had a series of more intense seizures which the medical team fought with difficulty to control.  Finally more stable, the one-day-old baby was heart wrenchingly wheeled away from her terrified parents for a brain scan.  The phrase Beth describes the news that Flo’s clinical team came back with is “life-shattering”.

Beth says: “Flo had had a massive bleed in her brain and were told there were no guarantees that she would survive the night.

“The bleed had damaged her brain but there was no way of knowing to what extent so even if she were to survive we were advised to prepare ourselves for the very real possibility that Flo could be left severely disabled.”

Flo did make it to the morning, and over the course of the coming days her clinical team found the right combination of medication to control the seizures and change Flo’s condition from critical to reasonably stable. But baby Flo also faced another huge challenge.  During the days that followed, she started to have difficulty feeding.  Flo suffered from severe reflux which caused her to vomit up all her feeds. As a new baby who was now rapidly losing weight, this very quickly became the biggest and most urgent cause for concern.

It took another seven weeks for the clinical team to stabilise Flo’s feeding enough for her to go home. During those weeks, her mum and dad took it in turns to hold a constant vigil at her side.  Beth says: “I didn’t want to leave Flo for a minute, not even to get lunch.  I felt completely bereft that this was happening to her and terrified about the completely uncertain future that I felt lay ahead.  I would just sit by her side with my box of tissues and cry.”

Flo finally went home with an NG tube to receive her feeds. Though Beth and Stuart had wanted more than anything to take their daughter home, they admit that for a good while, things felt that they had gone from bad to worse.  After only a month, Flo was re-admitted again, this time to Island ward – a place that quickly started to feel like a second home.   Despite being fed through a tube in an effort to alleviate her sever reflux, Flo had continued to vomit and her growth and general health were suffering as a result.  Still very fragile, Flo caught infection after infection and would need admitting to hospital repeatedly for observation and nutritional support. With toddler Seb at home, Beth and Stuart’s families rallied around to help.

Beth says: “Those stays in hospital were incredibly hard. I felt so guilty about being away from Seb but with Flo so incredibly poorly, I knew I had to be with her.  At certain points Flo would vomit up to 20 times a day and some of that would be blood.  I found it almost impossible to do anything with her or enjoy time with her because I was feeling so sad and also because even moving her slightly would make her sick.  This is where the play team made such a difference.

“Juliet, the Island ward play specialist helped us see the child beyond the illness.  She knew exactly what to do with Flo and would bring us play equipment and include us in activities so gradually we felt more confident to do the same.  She introduced us to the sensory room so when Flo was well enough, we got a break from our room and she’d encourage me to take breaks while she took care of Flo so that I could go and have a shower or get some food.  It was such a tough period anyway, it’s hard to imagine how much harder it would have been without that kind of support.” 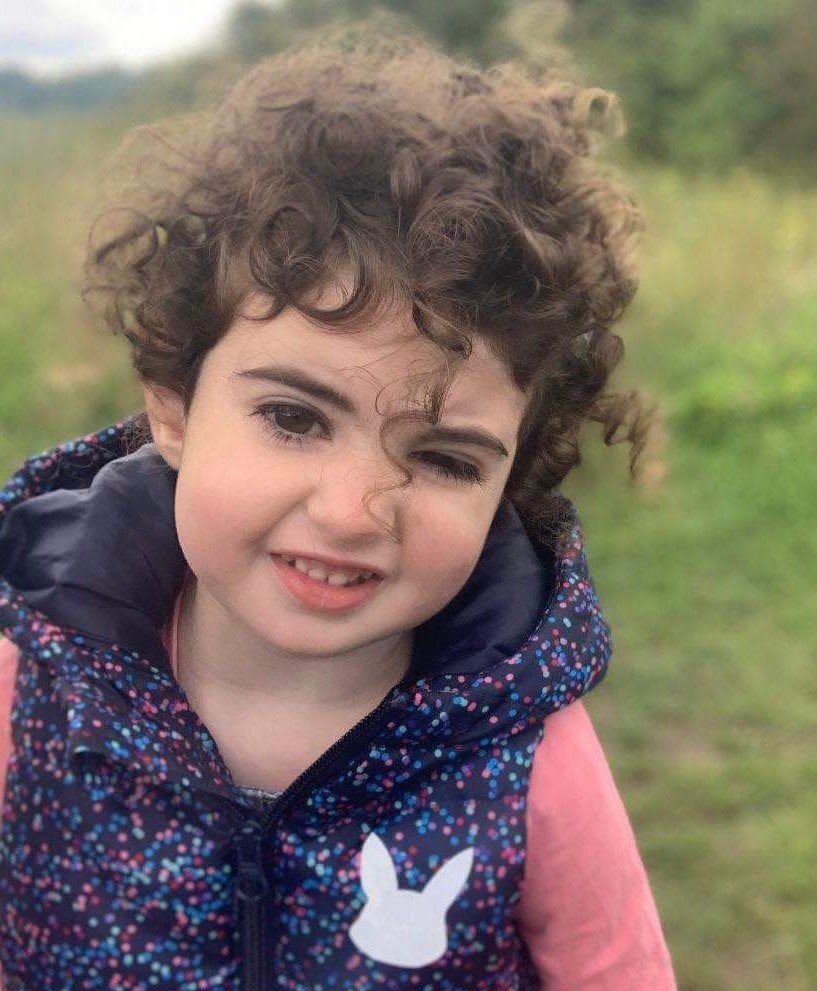 After six months of shuttling between home and Island ward, Flo had an operation to fit a gastrostomy so that she could be fed directly through her stomach instead of a naso-gastric tube.  The procedure made it much easier to feed Flo but hospital stays remained a frequent part of the family’s life right up until the first lockdown in March 2020.  The break from fighting off the common viruses and infections that she caught so easily in normal life gave her body the chance to grow and strengthen. Though there have been a few blips along the way, Flo has now managed to mostly stay out of hospital for the past two years.

Beth says:  “The change we’ve seen in Flo has been nothing short of incredible.  Early in that first lockdown she got up and walked for the very first time, something we were never sure she’d do.  And even more incredibly given her very rocky start with food, Flo has started to eat.  She still receives her nutrition through her gastrostomy but that’s such a major milestone. In fact every little thing is a big thing for Flo – every ounce of weight gained, every bit of food eaten, every infection avoided. Even though she still faces a number of developmental challenges she understands everything and is the most loving, cheeky and determined little girl.”

It’s Flo’s strength and determination that inspired Beth to sign up for the Cardiff Half Marathon in March to raise funds for the Noah’s Ark Charity. 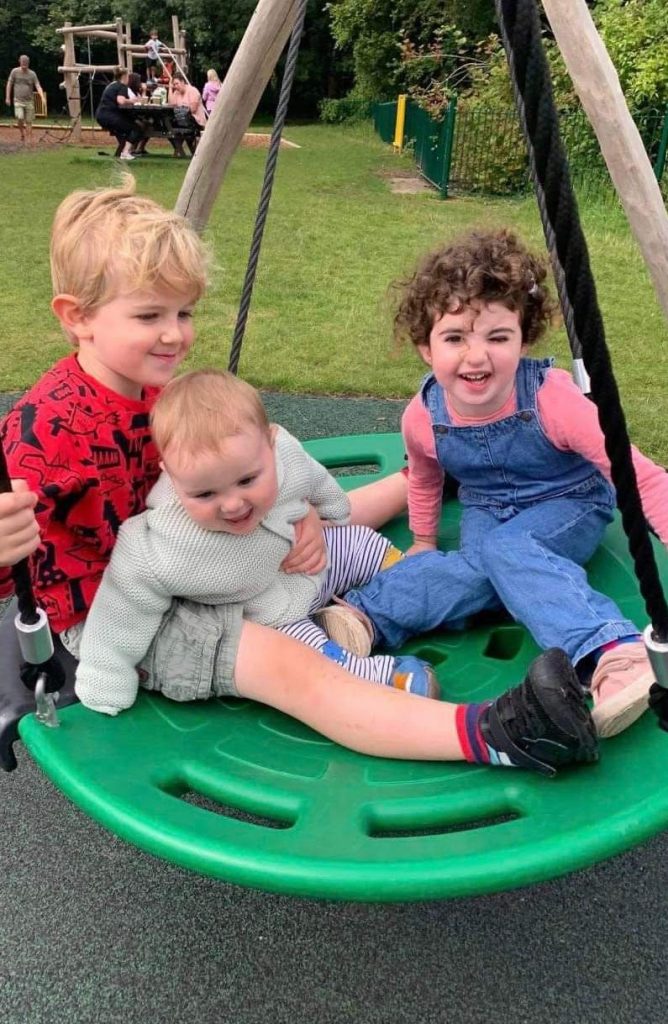 Beth says: “We’ve always wanted to give something back to the hospital which effectively saved Flo’s life and now she’s doing so well, I finally have the time to.  When I’m running, she’s always the thing I think about – how she’s been through so much and how determined she is. I tell myself that Flo never gives up so I’m not going to either.

“Life isn’t as we expected it to be since Flo came along but we’re so grateful and thankful to have her here. This is my way of saying thank you to the children’s hospital for the continuous support they’ve given us over the past four years.  Having the equipment and the facilities and the play specialists there to support us has all played such a vital role in our journey. We still have lots of things to worry about that we never had to worry about before but there are so many more positives then negatives in our lives these days.”

To find out more about how you can take part in the Cardiff Half Marathon in October as part of #TeamNoahsArk click here.