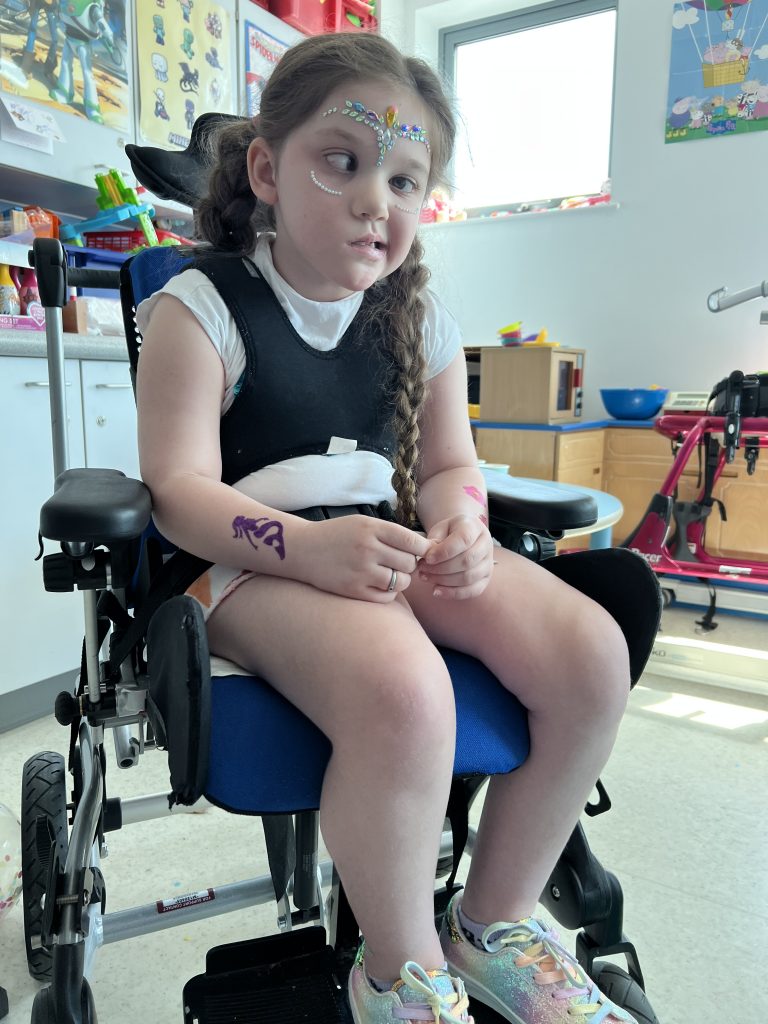 This time five months ago, six-year-old Lacey wasn’t able to walk, talk or even hold her head up unaided.  But here she was at her leaving party recently, performing a dance routine for the hospital team who have supported Lacey during her five month stay in hospital.

When Lacey first started complaining of headaches late last summer, mum Lisa took her to the opticians, thinking that her daughter may need glasses as her older son had done at around the same age.  A scan of the back of Lacey’s eyes did reveal some pressure on the left side but Lisa was told not to worry too much and come back in three months.

But Lacey’s headaches continued and, soon after, she also started waking in the night to be sick.  Lisa took Lacey to the doctors where she was told to keep a food diary in case she may have a food intolerance.  Unconvinced, and with Lacey’s symptoms continuing to the point where she was being sent home from school, they returned to the optician.  This time, the eye scan revealed building pressure on behind both eyes. Lacey was referred to her local hospital the very next day and after a series of eye tests and scans, parents Lisa and Shaun were taken in to a side room and given the devastating news that their daughter had a brain tumour.

Lacey was taken by ambulance to the Noah’s Ark Children’s Hospital for Wales where further scans showed that the fluid build up in Lacey’s brain was dangerously high. She underwent emergency surgery which was successful in removing 80% of the growth. Thankfully, Lacey’s tumour was not cancerous but it had been situated on her cerebellum, a part of the brain which regulates coordination and movement and helps maintain posture and balance.  The team had explained to Lisa and Shaun that, due to her age and the location of the tumour, Lacey could develop a condition called posterior fossa syndrome post-surgery.  Symptoms can include loss of speech, weakness, and poor balance. When Lacey woke from her operation, she couldn’t move or speak at all. 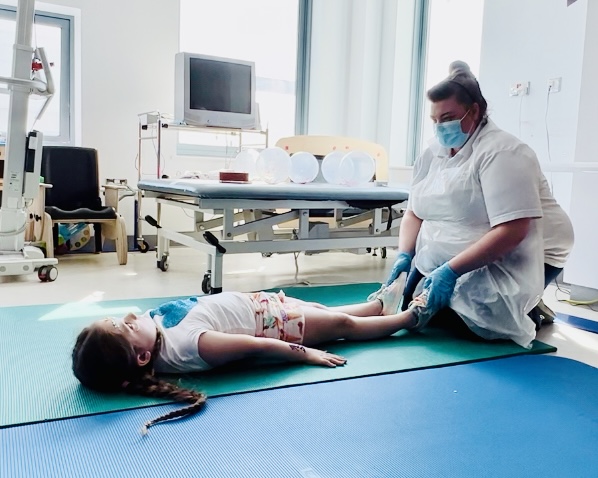 What followed was a long road to recovery in which Lacey had to learn to do almost everything again. Starting small, the neuro rhab team gently began retraining Lacey’s brain by encouraging her to move objects with her fingers. As soon as she was well enough, they sat Lacey up and started encouraging her to move her arms by playing little games that incorporated her favourite thing – Disney princesses.

Lacey, who wasn’t able to speak at all for weeks after her surgery, said her first word – “no” – just before Christmas.

Lacey’s hospital rehabilitation continued for another four months with her rehab team using different locations like the sensory room, garden and hydrotherapy pool to keep her engaged and motivated.  They got to know Lacey so that they could build sessions around the things she enjoyed so by the time it came to her surprise farewell celebration, the physio team knew exactly what she’d want   – a mermaid party with dancing, cupcakes and glitter. And that what Lacey got! 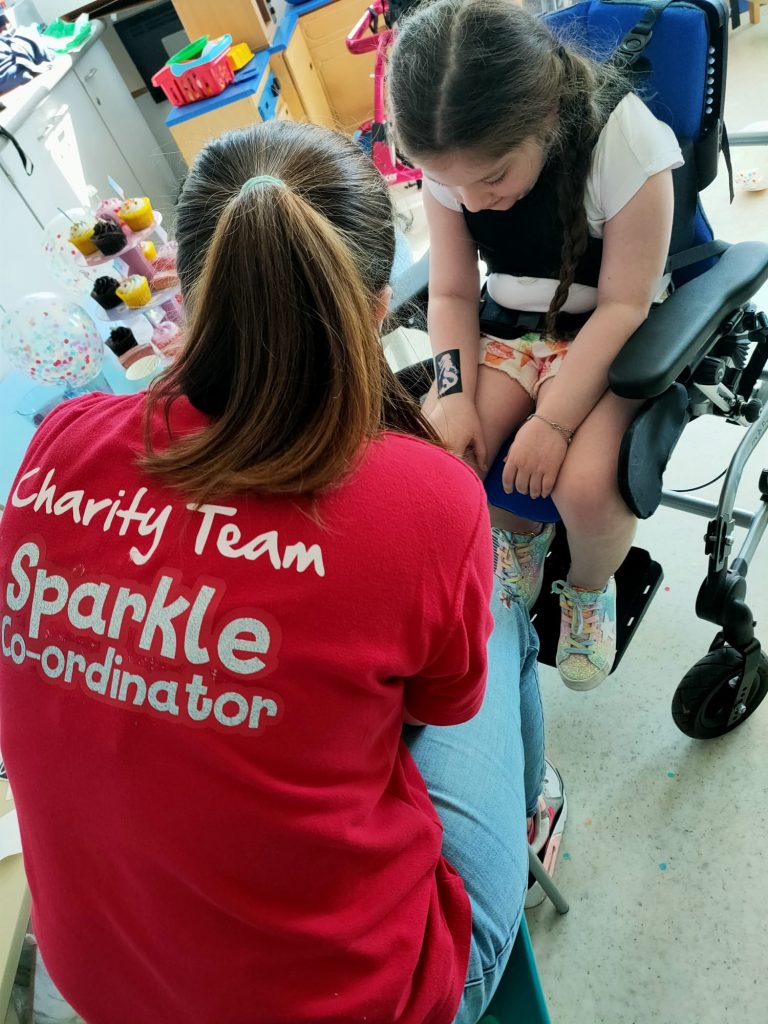 By now, thanks to the sheer determination of this six-year-old  girl, Lacey is able to roll, move her arms and legs and is even starting to walk with support.  She’s been working hard with her physio team over the last few weeks on a mermaid themed dance routine. It’s safe to say that watching Lacey move in ways that would have been completely impossible for her only a few short months ago, was the highlight of the day for that little part of the children’s hospital that day. 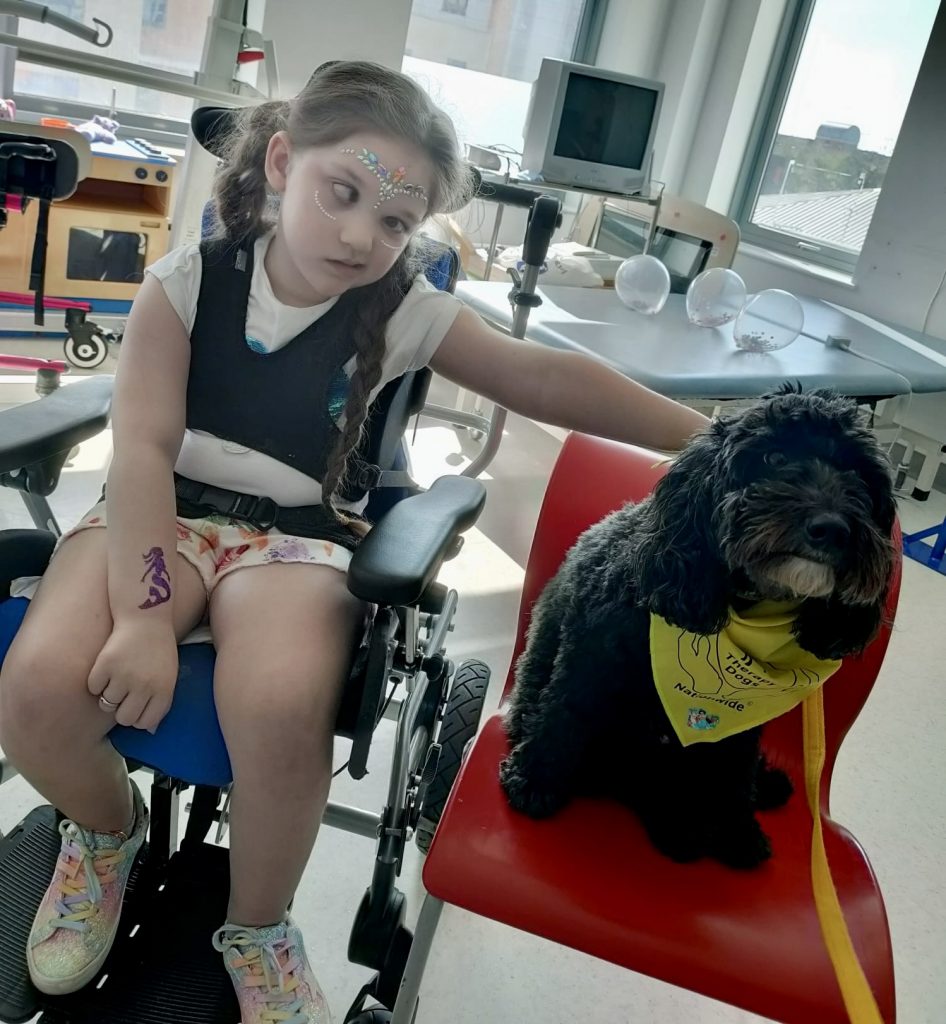 The money you have raised and donated built the theatre suite where Lacey had her life-saving surgery.  It funded equipment on PCCU where she spent time after and the hydrotherapy pool and sensory room where she underwent her rehabilitation.  Thanks to you, we were also able to add some fun in to Lacey’s long stay by arranging visits from therapy dog, Nico. We were also able to support the physiotherapy team in organising the farewell celebration when Lacey finally left hospital to go home.