My story by Mia Lloyd 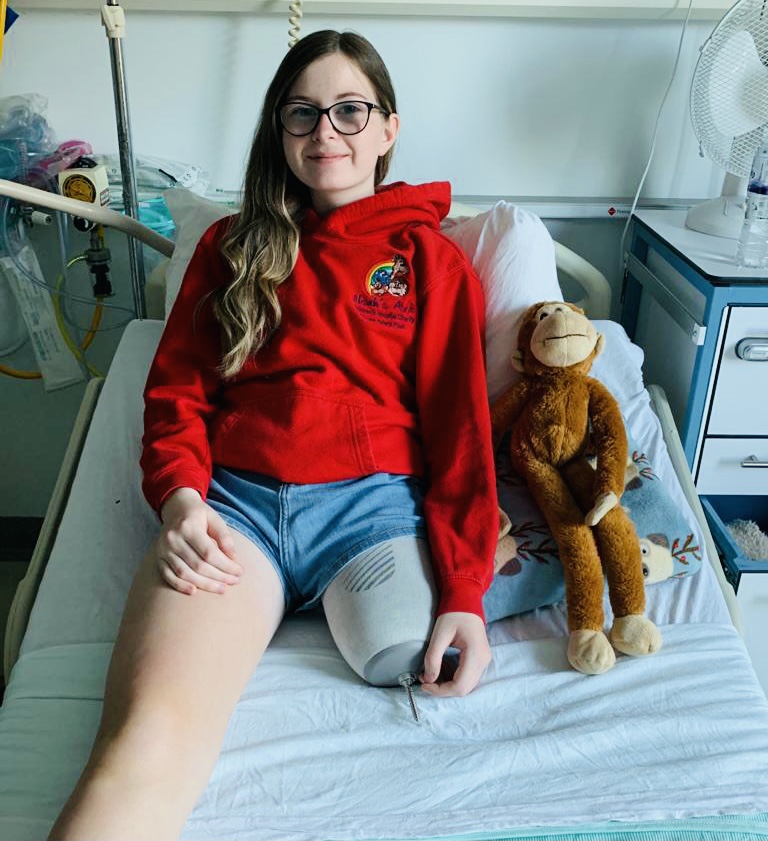 Back in April 2017 I was a busy, athletic 10 year old. I love sport – athletics; football; golf; climbing; swimming; skiing I was out every night after school! But quickly after my tenth birthday I started experiencing pain in my left knee. It was intermittent to begin with but after a couple of weeks the pain became unbearable. I started limping and waking up in the middle of the night in excruciating pain accompanied by night sweats. My family and I believed it could be a sports injury or growing pains and tried to relieve the pain with some physio; shoe insoles; painkillers and general rest.

After a month of struggling I visited my GP who was very attentive and sent me for an x-ray at our local hospital. Within 24 hours the GP called my mother and urged us to go to Glangwili Hospital in Carmarthen for further tests. I had never been in hospital before and it all felt very overwhelming and scary. I had an uneasy feeling that something was about to happen and yet my parents didn’t reveal anything of the worry that they must have been going through. From here we were sent to The Royal Orthopaedic Hospital in Birmingham for a biopsy. By this time my leg was in a brace and I had to use crutches as I wasn’t able to put any weight on my left leg. After a few weeks at home the biopsy confirmed that I had Osteosarcoma. The primary tumour was just above my left knee and further scans showed that I had numerous metastasis in both lungs. This came as a huge shock. I was scared of what was going to happen to me and so angry that my life was going to go on hold! I didn’t understand what cancer was but I knew that people lost their hair and some died of it, so naturally this scared me. My parents explained that I was going to be in hospital for long periods of time away from friends and family. I worried about missing school and not being able to participate in sport!

I received my chemotherapy treatment at the Noah’s Ark Children’s Hospital in Cardiff (which is at least 2 hours away from where I live) My parents came with me, leaving my older brother, Sam and little sister, Lili with my grandparents for weeks on end. We Facetimed often and they visited as much as possible. The treatment was tough. I lost my long hair within weeks and I experienced all the side effects possible – sickness; awful mouth sores; weight loss and a blood clot. My oncology team were always on top of my care and were able to offer medication to help relieve these side effects and for that I will be eternally grateful. My parents kept on telling me that I was brave but I didn’t feel brave – I was tired and frustrated!

All the consultants, doctors and nurses were very kind and helpful. Each member of staff was on hand to explain all the procedures that were going to take place and this made me feel at ease and confident – they all cared for me empathetically and sensitively. The play specialists on the ward always made time to spend with each and every patient – this was comforting and certainly a way of taking my mind off the treatment. I also visited the lovely Hospital garden for a break when I could – it was a relaxing and peaceful break from the ward. Having said that Rainbow ward became my second home and when I was well enough I was able to actually travel home for short periods! Although difficult at times I did manage to see my friends and even go to school to catch up with everyone.

After initially being treated for 10 weeks, scans showed that my primary tumour was responding to the chemotherapy. This was a positive milestone but there were still mountains to climb! This was when I was referred back to ROH Birmingham for discussions regarding surgery. Unfortunately I was too unwell to travel but I had already decided that sport was going to be the deciding factor in what was to come next. The two surgical options were limb salvage or an above knee amputation. I had only one question for the surgeon which was “Which option would give me the ability and opportunity to run again?” After a lot of discussion and following my gut instincts I opted for an above knee amputation. Being sports mad I knew that there would be a possibility of getting myself a running blade and getting back to the track.

I wanted to do a little bit of research before surgery so, as a family, we visited the ALAC in Morriston, Swansea where I receive all of my prosthetic care. We had many questions and needed a lot of reassurance. Luckily I walked out knowing that I would be in great hands and that my prosthetics team would do everything possible to get me back on my feet and partaking in sport once again. Surgery followed a few weeks later and I was calm and ready. The operation went well and although there was a few weeks of feeling phantom pains, those soon subsided with medication. 8 weeks later I was up and walking on my first prosthetic limb. It felt amazing! I completed the following 4 months of chemotherapy to mop up the lung mets and since February 2018 I have no evidence of disease.

Life after cancer has been challenging but who doesn’t enjoy a challenge? I have thrived on learning to walk and run on my numerous prosthetic limbs. Luckily sport is still a huge part of my life. I’m enjoying trying different activities but there are times that I have to adjust to participate with my peers. I’m a pathway athlete with Disability Sport Wales, who have given me fantastic experiences. In August 2019 I competed with the Welsh Under 14’s National Wheelchair Basketball team and in December 2019 I won Most Inspiring Young Person at the BBC Wales Sport Awards.

I have learnt that I live within an amazing community who raised money for myself; The Noah’s Ark Children’s Hospital Charity, who I am a young ambassador for and for Bone Cancer Research. I raise awareness of bone cancer whenever possible. I believe that sharing my story and staying positive is so very important. Living with a disability has not held me back. Working towards your dreams is still a possibility but you might just have to take a different path to get there!

The future? I aspire towards living a full, healthy, happy and adventurous life!

Discover how you can support children and young people like Mia in the charity’s 21st year, visit our 21 Years of Caring together page here.