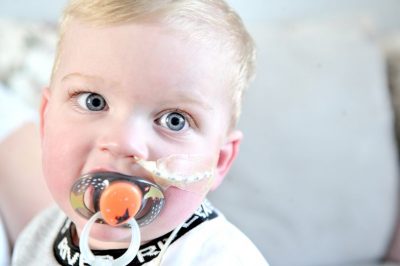 Two-year-old Ollie Gordon-Mahoney was born with hypoplastic left heart syndrome which means that only half of his heart functions correctly. His parents Beckie and Stephen were alerted to the  condition at the 20-week scan where they were s told that their baby was unlikely to survive labour. Despite the poor prognosis, Beckie and Stephen decided to continue with the pregnancy. Beckie received care throughout her pregnancy at the Noah’s Ark Children’s Hospital for Wales with weekly check-ups and scans.

The second of the open heart procedures  was performed when Ollie was six months old, this time to send blood from the upper body directly to the lungs, so Ollie’s single working ventricle wasn’t under as much pressure.

Beckie says: “After the two procedures Ollie remained stable, happy, and cheeky for a few months. Ollie received monthly check-ups at the Noah’s Ark Children’s Hospital throughout and does until this day.”

At the age of 18 months, Ollie contracted a virus and Covid, and already extremely vulnerable, he went in to heart failure and spent a month on the Noah’s Ark Children’s Hospital paediatric critical care unit followed by a further three weeks on Pelican Ward. 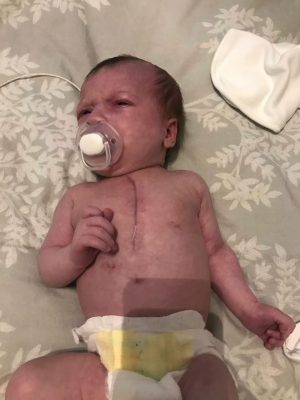 Only 30% of Ollie’s heart is functioning and despite being due the third operation to treat his hypoplastic left heart syndrome doctors feared he wouldn’t survive the procedure. He is now awaiting a heart transplant but is likely to be waiting up to 18 months for a heart.

Stephen says: “Through a number of fundraising efforts through ‘All for Ollie’ as a family we have raised £4,600 for the four charities that supported us throughout, including Noah’s Ark.

“During our stays we realised the importance of fundraising and that every penny counts. We cannot be more grateful for the care that we received, and it is just a small way for us to give back by helping to fundraise for the charity.” 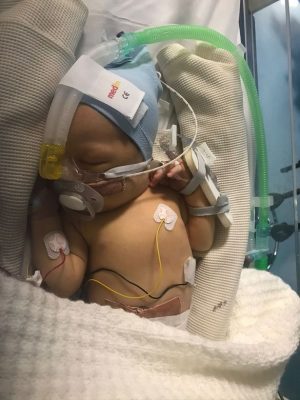 Thanks to the incredible support of all those who donate to the Noah’s Ark Charity, we were able to fund two Echocardiograph Machines for the Cardiology Unit, which treats around 4,000 patients a year. The most recent addition will specifically detect and diagnose heart conditions in babies both before and after birth. This new state-of-the-art machine includes the latest technology to detect heart defects in unborn babies – saving lives just like Ollie’s, improving outcomes and giving parents informed choices about current and future pregnancies.