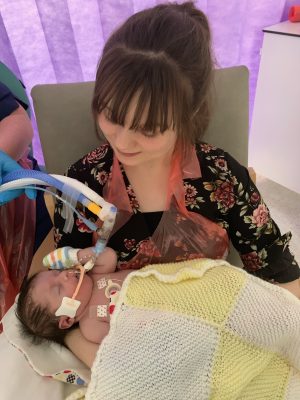 When Bryony imagined her first year of motherhood she pictured much the same as any new mum – introducing her baby to friends and family, pram walks in the park, cuddles on the sofa. What she got instead was a year in hospital, isolated almost completely from the rest of the world to keep her baby safe.

Bryony had no idea that anything was wrong with her son until she was in labour.  After a straightforward pregnancy, she was induced but during the birth the baby’s heart rate kept dropping.  Once born, it became immediately obvious that baby Oscar couldn’t breathe for himself and he was resuscitated right there in the labour room.   The medical team suspected a condition called TOF/OA, a rare condition where the oesophagus (gullet or foodpipe) is not connected to the stomach and is joined to the trachea, or windpipe, instead. Bryony was told that unless her son was transferred immediately to another hospital, he might die.  They were put in an ambulance and blue lighted to the neonatal intensive care unit (NICU) at the University Hospital of Wales in Cardiff where Oscar was immediately taken to surgery.

The operation was a success but as it turned out, TOF/OA was just the beginning of little Oscar’s problems.  Back on NICU Oscar seemed to be recovering well from his operation and the decision was made to remove him from ventilator.  But shortly after, Oscar went in to cardiac arrest and needed to be resuscitated for the second time in his short life. It was at this point that Oscar’s more complex heart defects were discovered. Over the following weeks, baby Oscar was also diagnosed with a blockage in his nasal passage, hearing problems and an eye defect called coloboma. 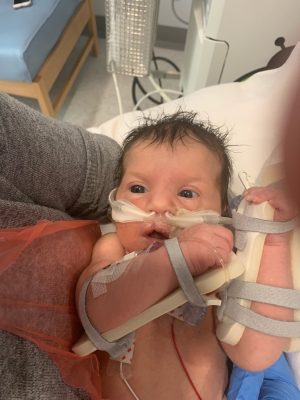 Bryony says: “It felt like one punch after the other during those first few weeks. The minute I was given one piece of bad news I was given another.  After the coloboma diagnosis, a geneticist came to see me and explained that Oscar’s symptoms suggested he may have a condition called CHARGE Syndrome. I desperately didn’t want it to be that.  Somehow in my head, having a series of unconnected issues made them seem more straightforward to fix.  It took a month for the result of the genetic testing to come back but by the time CHARGE was confirmed, I already knew.”

CHARGE is a rare and complex condition with no one set of rules. As it can cause a range of birth defects effecting different parts of the body, babies like Oscar face a series of long, often complex, corrective surgical procedures in their first few months of life. This is a daunting enough prospect for any parent but for Bryony, things became significantly more complicated after a diligent NICU practitioner tested Oscar’s T-cell count only to find he had none. Completely separate to the CHARGE diagnosis, Oscar had been born with Severe combined immunodeficiency (SCID), a condition that is fatal by the age of two without treatment. Oscar had no thymus, the gland responsible for producing the T-cells that help fight infections. He was put forward for pioneering treatment at Great Ormond Street Hospital but in the meantime, Bryony and Oscar would have to live in almost complete isolation.

Bryony says: “One of the things that parents take a lot of comfort from on NICU is the sense of camaraderie and the friendships you build with other parents around your baby’s cot side or in the kitchen while making a cup of tea, But because our first and only priority was to protect Oscar, that didn’t happen for me.  We were put in a room away from the ward and not even my mum could visit from that point.  It was just me and Oscar for a very long time.”

That July, Oscar underwent complex heart surgery in Bristol. Oscar was then sent back to the NICU in Cardiff before mother and son were taken to London where Oscar underwent a thymus transplant in late September. At that point Oscar was only the 107th child in the world to have undergone the cutting edge procedure.  Back at the Noah’s Ark Children’s Hospital for Wales, he was put in to isolation again while, it was hoped, his new thymus would begin to produce the T-cells he needed to survive.  By the following May, Oscar had enough in his system to prove that his new thymus was working  and for the first time ever, Bryony took Oscar out for a walk outside in his pram! Bryony says it was the best experience of her life but it was also very strange.  It was the new mum experience she’d been anticipating but with a one-year-old.

Oscar eventually moved on to Island ward where at 16 months he now lives while awaiting more surgery and for his home in Amanford to be adapted. Unfortunately due to Covid-19, Bryony’s friends and family still haven’t met Oscar but he’s finally now able to spend some time away from his bed, in the sensory room which charity supporters have helped fund, or in the nearby park on sunny days.  But things have still been far from plain sailing for this little family.  At the end of June Oscar suddenly went in to cardiac arrest without any explanation.  It took a while to revive him and Oscar spent some time on the paediatric intensive care unit (PCCU) where at points, Bryony was told to prepare for the worst.  But in true Oscar style, he bounced back and is now doing better than ever. 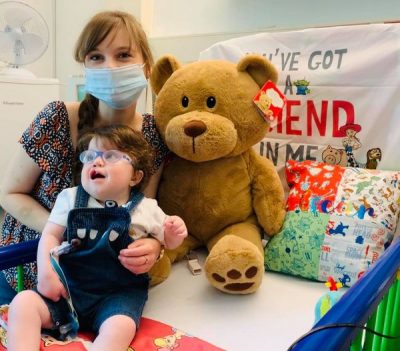 Oscar finally got to go home in  December 2020.  Walking out of the hospital for the last time was an amazing experience for Bryony but she says she will never forget the care they both received.

Supporters like you helped make the most difficult months of Bryony’s life just a bit more bearable. Through our Tiny Lives Appeal, you made it possible for us to fund state of the art equipment that kept Oscar alive during those perilous first months. You funded the ventilators on NICU and PCCU that helped Oscar breathe when he was too ill to, the theatre suite where he had his first life-saving operation and the play team who have supported Bryony in keeping Oscar entertained and achieving his milestones. You helped us provide food for Bryony and others parents like her during the first months of lockdown when ward restrictions were tight and more recently helped us bring a bit of home to Oscar’s hospital room with a Toy Story themed makeover.

You help us be here for the big things and the little things. Thank you.