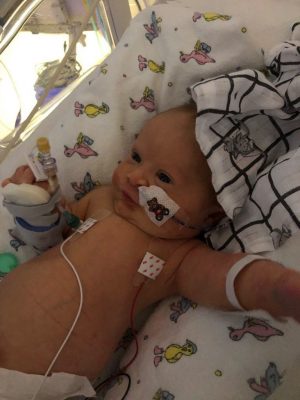 15-month-old Parker from Swansea was born on the 8th of April 2021 to parents Leanne and Steffan. Parker was the couple’s fourth baby, joining older siblings Elle-leigh, Lilly and Luke.

At Leanne’s 20 week scan she was alerted to the fact that Parker had a 99% chance of being born with down syndrome. Leanne says: “It was a shock to hear the words after having three healthy pregnancies, but I’d had a feeling from the very beginning that something wasn’t quite right. Despite being told that one of my options was termination, that never crossed my mind. Parker was my baby, and we would face any challenge together as a family.”

Leanne declined any further invasive testing to conclusively determine whether Parker had down syndrome.  If he was otherwise healthy, the family decided they didn’t need to know for certain as 99% chance was certain enough for them. During her pregnancy Leanne was monitored by the foetal medicine team and at her 30-week scan was told that Parker’s growth had slowed down and that the placenta wasn’t functioning properly. He was put on steroids to boost his growth.

Parker was born at 36 weeks and did incredibly well at first. But after 12 hours, he stopped feeding and became lethargic. His nappies were also completely dry.  By the time he was 36 hours old, Parker was having to be woken up to feed and his concerned doctors sent him for a heart scan. 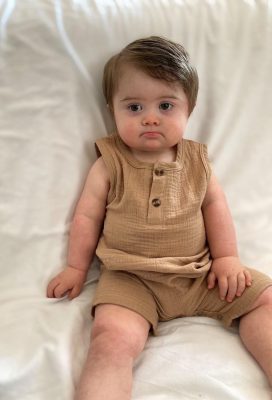 Parker was diagnosed with Hirschsprung’s disease, a rare condition mainly affecting babies and young children that causes poo to become stuck in the bowels. Normally the bowel continuously squeezes and relaxes to push poo along, a process controlled by your nervous system. In Hirschsprung’s disease, the nerves that control this movement are missing from a section at the end of the bowel, which means poo can build up and form a blockage. This can cause severe constipation and occasionally lead to a serious bowel infection called enterocolitis if not identified and treated early on. Thankfully, as in Parker’s case,  the condition is usually picked up soon after birth and treated with surgery.

Parker was transferred to the Noah’s Ark Children’s Hospital for Wales where he had a biopsy to determine how much of his bowel was affected. Parker then underwent seven-and-a-half-hour surgery to remove six inches of his bowel. Leanne says: “I never thought I would be so happy to see that first dirty nappy.”

After being taught how to give Parker daily bowel wash outs, Leanne and Steffan were finally able to take their baby home, but he continues to return for monthly check-ups at the children’s hospital.

Leanne says: “It’s been so hard, but we have wanted to give Parker the best chance of remaining continent as he grows. He will remain on long term medication and wash outs until he gets older. Developmentally he is doing really well, and we are always keen to end the stigma around having a child with down syndrome. The staff at the Noah’s Ark Hospital were brilliant from the beginning especially Parker’s surgeon, Oliver Jackson. All the team couldn’t be any more supportive. The support is outstanding, they are always a phone call away.”

Thanks to the incredible support of all those who donate to the Noah’s Ark Charity, we were able to fund two Echocardiograph Machines for the Cardiology Unit, which treats around 4,000 patients a year. The most recent addition will specifically detect and diagnose heart conditions in babies both before and after birth. This new state-of-the-art machine includes the latest technology to detect heart defects in unborn babies – saving lives just like Parker’s, improving outcomes and giving parents informed choices about current and future pregnancies. Your support also funded the specialist paediatric theatre suites where tiny Parker had the corrective surgery on his bowel and the pull-down beds on Owl ward which meant that Leanne was able to stay close to her baby while he recovered from surgery.