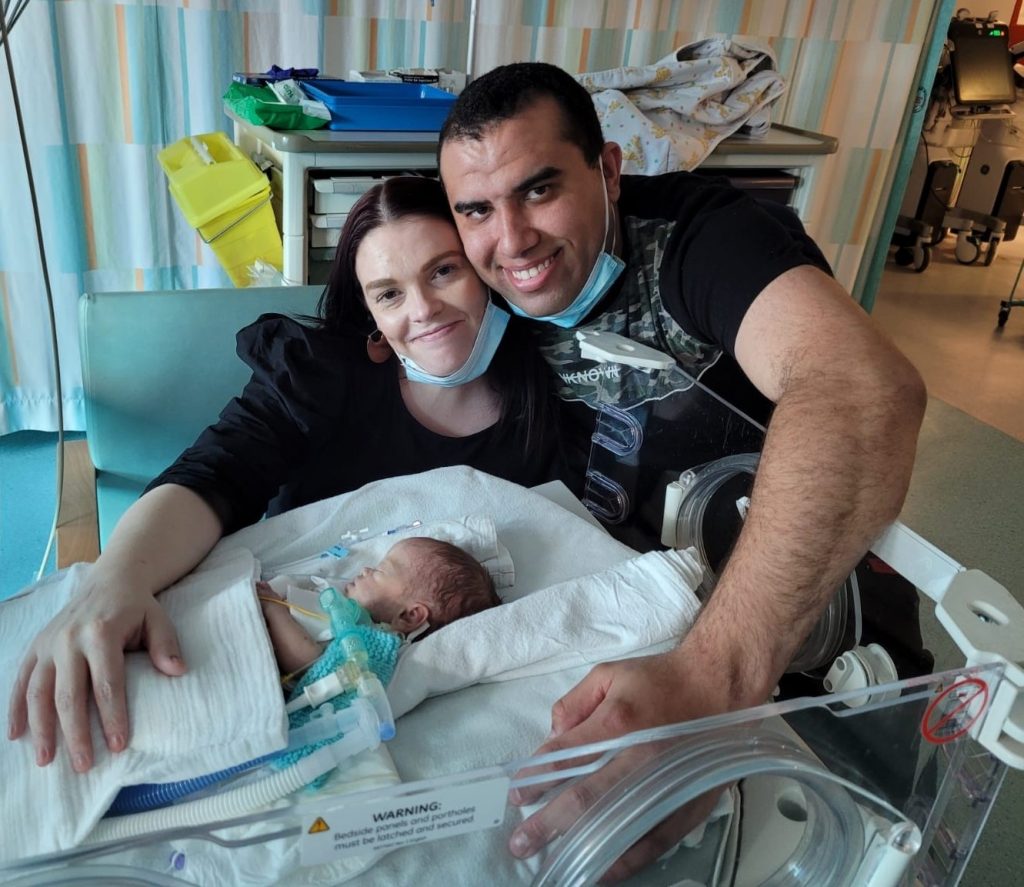 Like any new dad, Teon won’t ever forget the first few hours of his son Rameo’s life.  But for Teon, it’s for all the wrong reasons. Seconds after the umbilical cord was cut, it became clear that Rameo wasn’t breathing. The medical team started performing CPR and the emergency button was hit. At the same time, doctors were struggling to stem partner, Adrianne’s bleeding.  Teon remembers feeling completely helpless, desperately trying to keep one eye on Adrianne and the other on his new son.

While Adrienne was rushed to theatre for emergency surgery, the neonatal team surrounded Rameo, desperately trying to get a tube down his tiny nose to help him breathe. He was taken to the neonatal intensive care unit where his doctors spent five days desperately trying to stabilise him and work out what was wrong.  Eventually after an emergency trip to Great Ormond Street for exploratory surgery, Rameo’s parents were given the devastating news that their son had been born with no upper airway.  He was only alive at all because, incredibly, his food pipe was acting as a substitute for his trachea and his body was able to receive small amounts of oxygen through a tiny piece of cartilage connected to his lung. It was something the surgeons had never seen before and they were baffled at how Rameo could even have survived this long.

Rameo was taken to surgery for an extensive operation that his parents were warned he may well not survive.  During his seven hours in theatre, Rameo was fitted with a tube to provide nutrition directly in to his veins and given a blood transfusion. His surgeons also re-formed an oesophagus and fitted a tracheostomy for Rameo so that he could be ventilated. It’s likely that he will receive food and breathing support like this for the rest of his life.

Rameo will need more major surgery when he’s a year old to fit stents which will make his airway more secure.  For now though, his home is the paediatric critical care unit (PCCU) at the Noah’s Ark Children’s Hospital for Wales where he can grow and stabilise before the clinical team try him on a less invasive form of ventilation.

Because he was so ill, Teon and Adrienne weren’t able to hold their baby for more than a month. Teon says: “Not being able to do the normal things is the hardest part. We haven’t been able to do so many of the things we expected to like introduce Rameo to his big sisters, Ava and Renee, or use the toys and baby things we bought for him that we’ll now never used.  There’s very little we’ve been able to do for him anyway up to this point but when we couldn’t even cuddle him it almost felt like he wasn’t ours.”

Rameo’s doctors and nurses don’t know yet how long he’ll need to stay on PCCU before he’s well enough to go to a ward.  It’s one of the many reasons his care team are keen to introduce a new programme called CHWARAE PCCU on to the unit.

Decreasing sedation and introducing a daily routine and activities to babies and children in critical care has been shown to result in shorter lengths of stay, and just as crucially, a less distressing experience for families.

The Noah’s Ark Charity want to support the PCCU team by raising funds to make the CHWARAE PCCU programme possible.  The funding will provide seating support, sensory equipment, softer lighting and communication aids for older children, transforming each bed space in to a more familiar and less daunting environment where children will be able to sit up, interact and play with their parents or carers as soon as possible.  We also want to fund a specialised adapted chair so that children like Rameo can come out of bed more often for cuddles with the people who love them while still being fully supported by the machines they need. 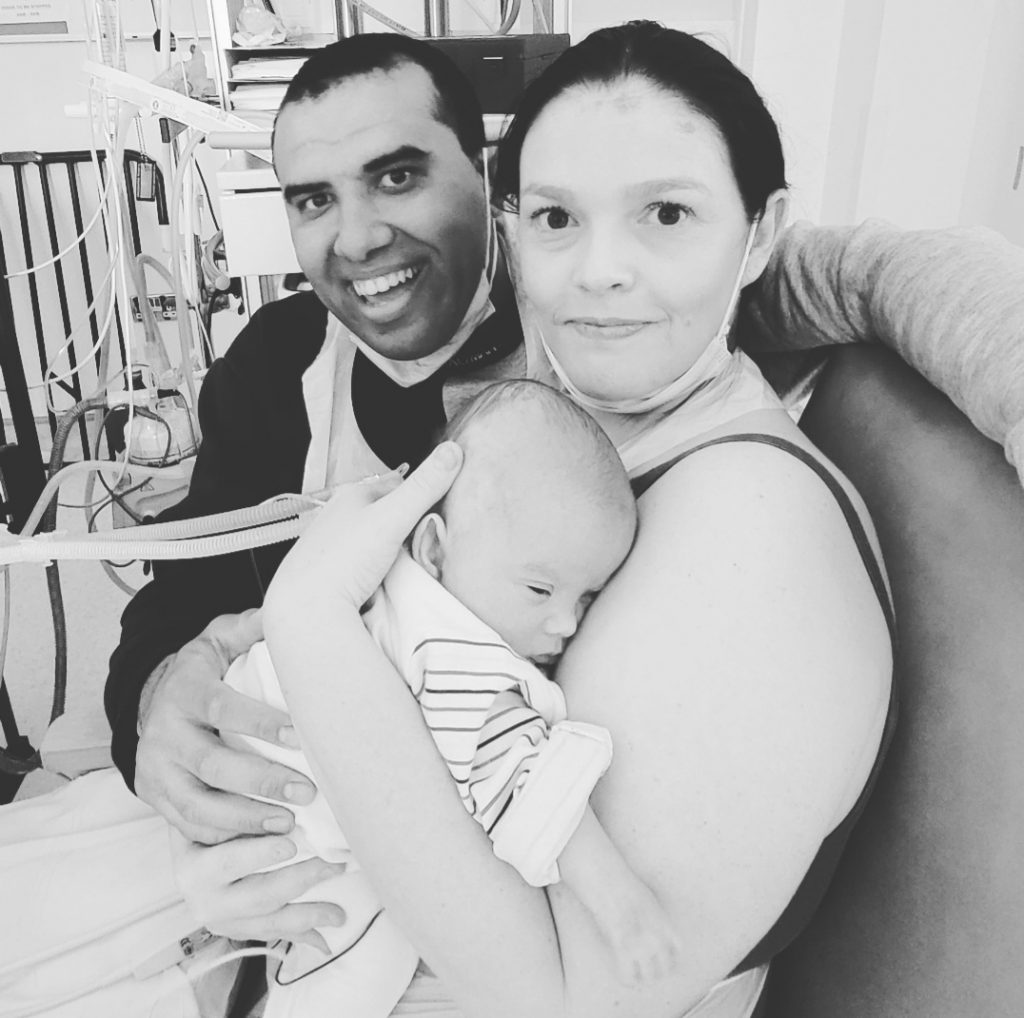 PCCU physiotherapist, AnnMarie Newbury, is part of the team developing the programme. She says:

“Up until now Rameo has only been nursed in his cot whilst supported by the ventilator. Initially this was essential whilst he was so unstable, but as he’s grown and become more stable we want to make sure we provide the best opportunity for normal development; physically, socially and emotionally. We want to try and do this as soon as we can – whilst obviously keeping him safe.

“A baby of Rameo’s age at home would be in a regular day and night routine, having lots of cuddles from family and have the opportunity for development through play and in different positions. Traditionally the PCCU environment isn’t set up for that; in the past they have been very clinical places where most children remain in bed, sedated.

There is now more evidence to suggest that normalising the critical care environment and introducing mobility and play as soon as is safe to do so improves experiences and outcomes for children and their families.

As a PCCU team who want the very best for our young patients, we want to challenge previous barriers and facilitate making early development a focus each day, both for Rameo and his family and the hundreds of other children we care for on PCCU each year.”

The Noah’s Ark Charity is currently raising money to fund the CHWARAE PCCU programme as part of its autumn appeal. To find out more about how your donation could help families like Rameo right now, click here.