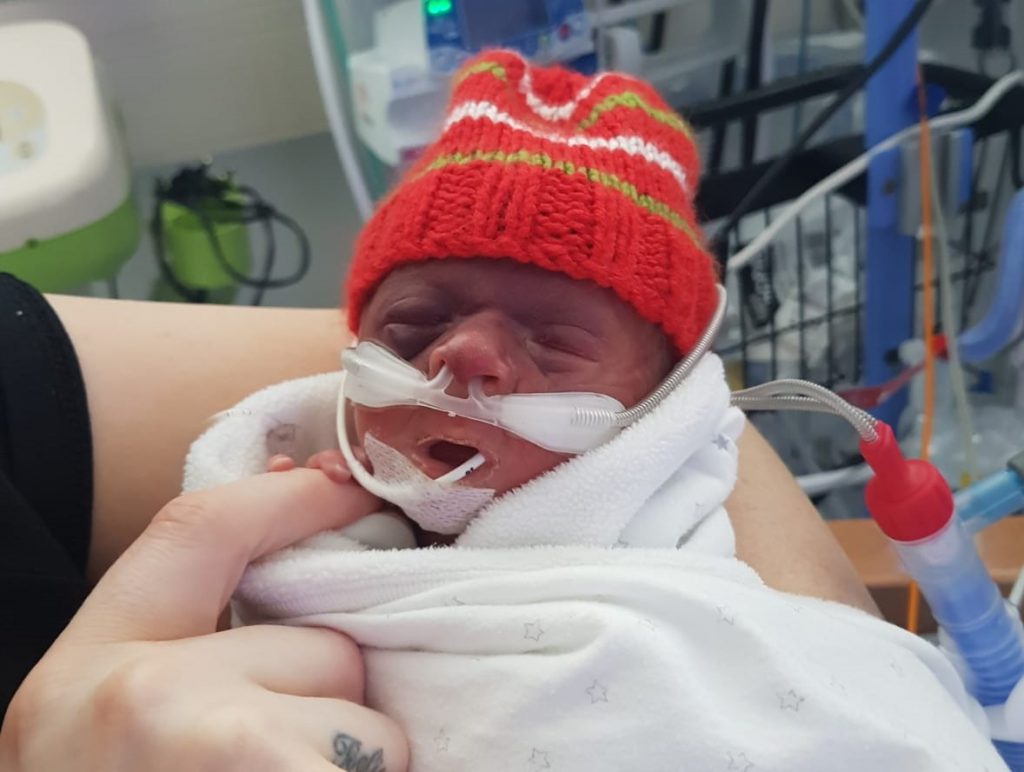 Baby Taliesin arrived in to the world three months early, at only 28 weeks in to his mum, Liz’s pregnancy. Liz had started having contractions earlier that week and first went to the nearest hospital in Carmarthen where she was given steroids to mature the baby’s lungs.  As it became clear that Liz was going in to full labour, the couple were moved to Newport, the nearest hospital with facilities for such a premature baby. Taliesin was born weighing 2lb 10oz on 25 February 2020. His parents had only a few seconds with him before he was taken away to be stabilised.  When Liz and Rhys saw their baby again, he was attached to countless wires and machines on the neonatal intensive care unit. 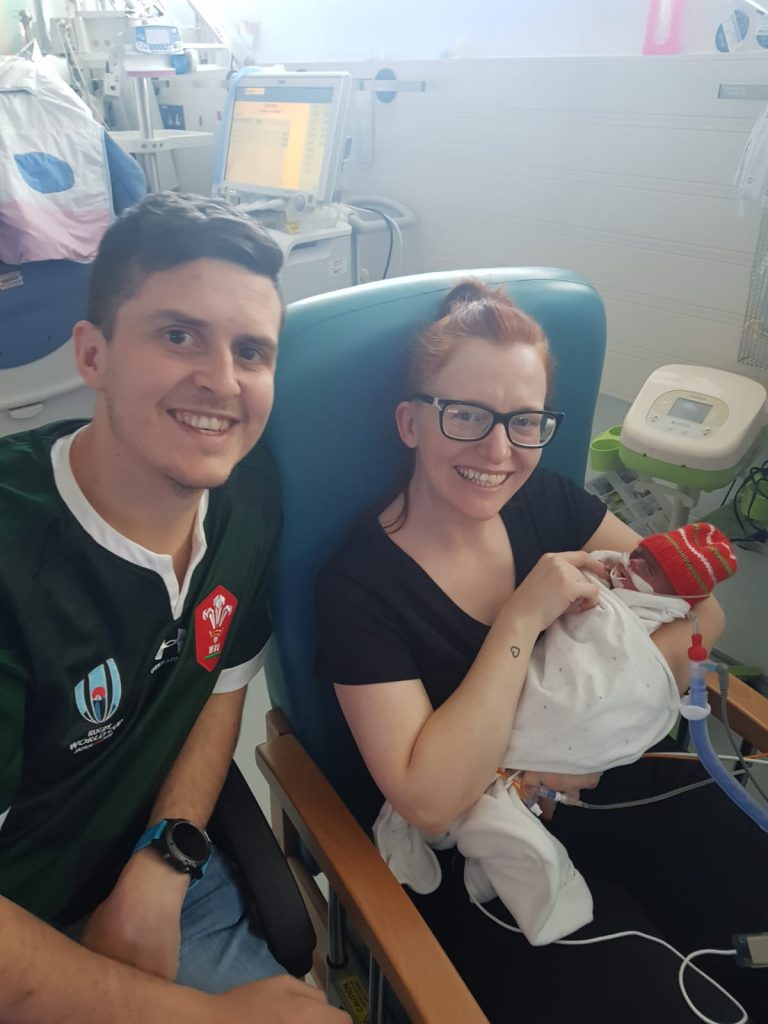 Despite being three months premature, Taliesin did very well at first.  He needed minimal support with his breathing and Liz and Rhys were surprised when they walked on to the ward on the second day and were given the opportunity to hold their tiny baby.  After seven days, a cot was found for Taliesin in a NICU unit closer to home – a huge relief to the new parents who had spent the week shuttling between a hospital and house two hours apart. One step closer to home, Rhys and Liz were hopeful that the worst was behind them.

But, early in to his second week, Liz and Rhys were told that Taliesin’s protein levels were dangerously high and he was diagnosed with PKU, a condition where enzymes needed to break down protein in the body are absent. Treatment for the potentially life threatening condition is usually to reduce protein intake from food with a specific PKU formula. But as breast milk, which is naturally high in protein, is also essential for such a small baby’s health, the clinical team faced a challenge to get the balance right.

Soon enough, Taliesin was on the move again, another step closer to home at a local special care baby unit. But after only a few days, Taliesin’s leg started to swell and, suspecting cellulitis, the clinical team started IV antibiotics. Worried that he may also be developing sepsis, Liz and Rhys were told that their baby was being transferred for a third time back to a bigger specialist unit in Swansea.  Liz and Rhys drove to the hospital, anxious about what to expect when they saw their baby next. Little did they know at that point that Covid-19 was about to make a difficult situation, a lot more difficult.

Liz explains:  “The day Taliesin moved again was the first day of lockdown.  While on our way to the hospital, we received a call from a nurse on the unit who told us that as of that morning, only one parent would be allowed in.  It was such a horrendous feeling.  Knowing that our baby was so unwell, but not exactly what was wrong, that we had been so close to going home but we were now worse off than we’d ever been.  And knowing that whatever was behind those ward doors, I would have to face alone while Rhys couldn’t even be with us. 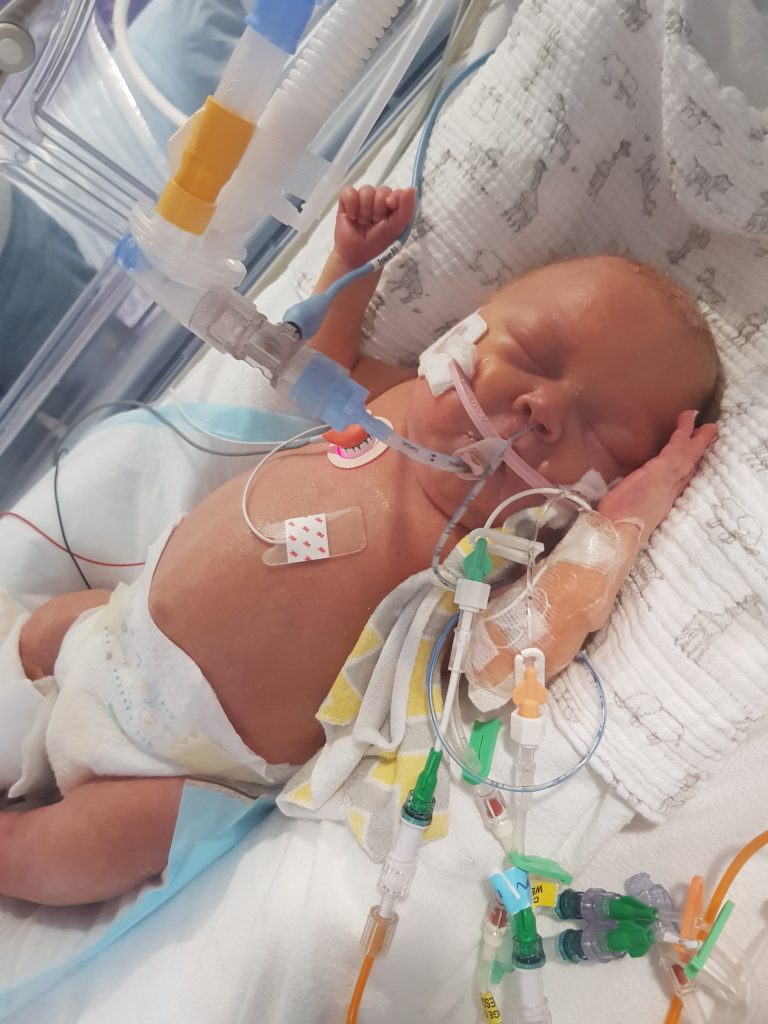 “Rhys spent weeks apart from Taliesin after that and during that time I had to call him to tell him the news that Taliesin had been put on a ventilator, had developed oedema (severe swelling)  and was on strong antibiotics for a suspected infection in the bone of his leg.  After 11 long days, things did briefly start to look up and Taliesin was taken off the ventilator. But then late one night we received a call that every NICU parent dreads. Taliesin was going downhill again fast and I needed to go in straight away.”

With blood tests revealing dangerously high infection markers, Taliesin was given two blood transfusions before being rushed to the neonatal intensive care unit in Cardiff.  There, he was diagnosed with sepsis and osteomyelitis, infections of both the blood and bone. By this point, Taliesin’s infection markers were 242, 160 above the number classed as critical.  His body was swollen to the point that the pressure had caused his fingers to turn white. Bruises that had started to appear on his leg were turning in to huge blood blisters. 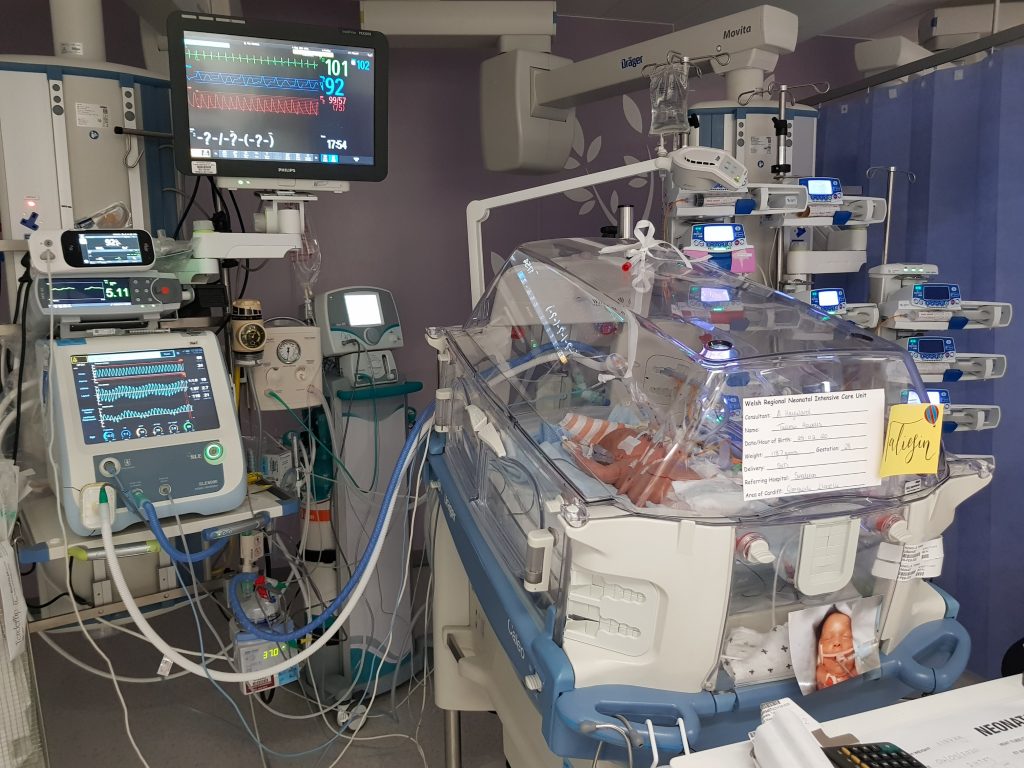 Liz says:  “The team in Cardiff were amazing right from the start. I’d never seen anything like it!    Taliesin was placed in a state of the art incubator which I found out later had been funded by the Noah’s Ark Charity and, within minutes of us arriving, we were introduced to a new consultant who ordered countless different tests.

“Taliesin’s antibiotics were sent off to be assessed by the microbiology team and soon after Taliesin was down in MRI having his leg assessed. He was put on three types of antibiotics and then it was a waiting game to see if they’d take effect.  By that point I felt like an expert in understanding the medical lingo and various monitors. I had become obsessed with the numbers, panicking each time his oxygen levels or heart rate dropped.  It’s hard to describe the intensity of that experience or the level of pure adrenaline I felt my body was running on.”

Gradually, over a period of weeks, Taliesin’s condition again started to improve.  The skin on his body, which had been badly stretched by the swelling, started to heal, as did the wounds left from the blood blisters on his leg. Ten days after their arrival in Cardiff, Taliesin was considered well enough to come off the ventilator.  But, yet again, the improvement was short lived.  .

Liz says:  “I was changing Taliesin’s nappy when I suddenly noticed that his skin was turning grey and his stomach was heaving. The nurse sounded the alarm and within seconds we were surrounded by doctors who ventilated him again and made attempts to catheterise him.  I was ushered out of the room and had to ring my husband to break the most frightening news.

“This time Taliesin was so ill that Rhys was allowed in. We sat up with him all night watching his oxygen levels drop and his dependency on the ventilator increase until it was at 100% and Taliesin was transferred to the last resort – an oscillator. But his sats continued to drop, his blood refused to clot and his blood pressure remained dangerously low. On what also happened to be our first wedding anniversary, we were taken aside and told the worst news possible.  Though they would continue to try and work out what was wrong, at that point there was nothing more they could do to help our baby.  It was horrendous. We sat at his bedside and prayed, taking it hour by hour.”

Miraculously, Taliesin held on through that day and night and by the following morning, some further tests had come back.  The strong antibiotics which had been essential to save Taliesin during the previous infections had also killed off much of the good bacteria in his body, leading to fungal sepsis.  Tiny Taliesin was still critically ill, but at least now the clinical team knew what to treat. 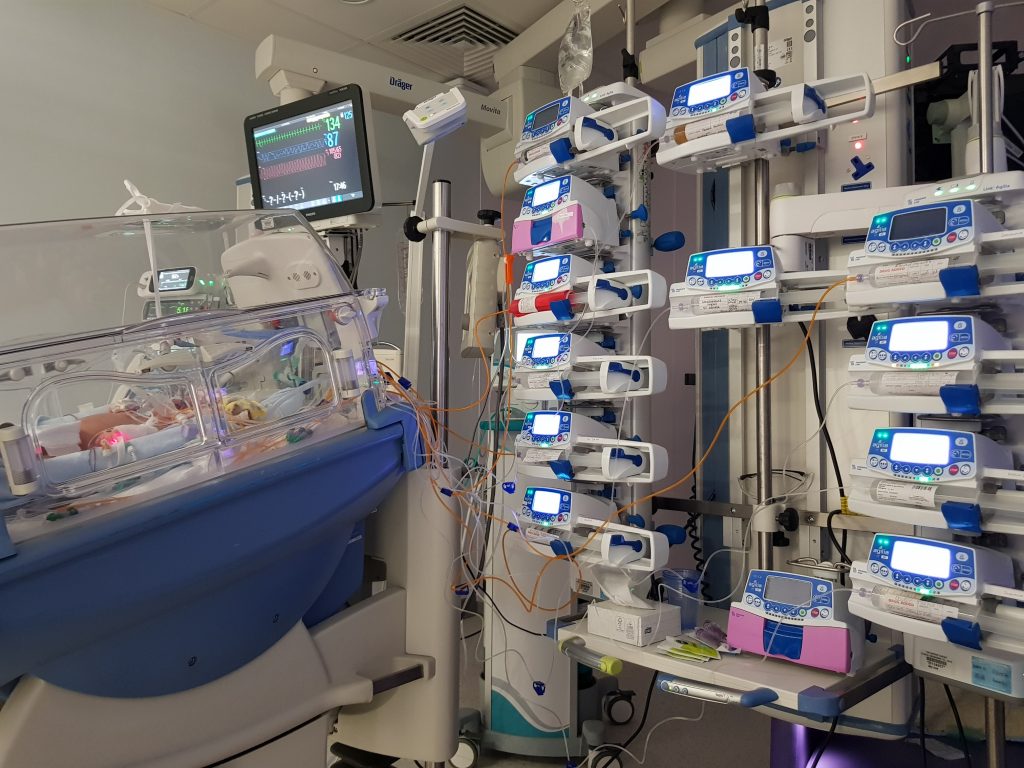 Over the next four weeks, Taliesin remained in his incubator, attached to the oscillator that breathed for him. He was also attached to 14 different pumps providing him with medicine, blood and plasma. Taliesin was being kept alive entirely by machines.  His condition was so unstable that even the slightest change in position would cause his blood pressure and heart rate to plummet. His mum went a whole month where she held her baby only once.

Liz says:  “The pain of having your baby so ill and not even being able to hold him felt excruciating at times but hearing the anguish of other parents losing their baby was almost too much to bear. It’s something I heard several times during our stay on the unit and all I could do was sit at Taliesin’s cotside and cry – for them and for us.” .

“It was often the kindness of other people that pulled us through.  By this point, Rhys and I were allowed to take it in turns to be with Taliesin but Rhys is an essential worker so had to travel hours each week to come to and from the hospital.  It meant that we weren’t able to be there for each other emotionally or practically either. The concept of leaving your baby on their own to get food or coffee when they were so ill was terrifying, as was the fear of somehow bringing Covid back with you.  Thankfully for the whole time that we were in Cardiff, the Noah’s Ark Charity provided food for the parent kitchens and we were so grateful for that.  I remember being amazed that people would be so kind as to support a charity helping NICU parents at such a strange time.

“The doctors and nurses became our temporary family while we couldn’t be with ours, looking after us almost as much as they did Taliesin.  Once, when Taliesin had improved a bit, I came in to find that the nurses had re-arranged the whole bay so that he could come out of his incubator on his machines and I could hold him. Another time, after mentioning that I’d never given him a bath, they arranged for me to give him one, complete with Spa music playing in the background.” 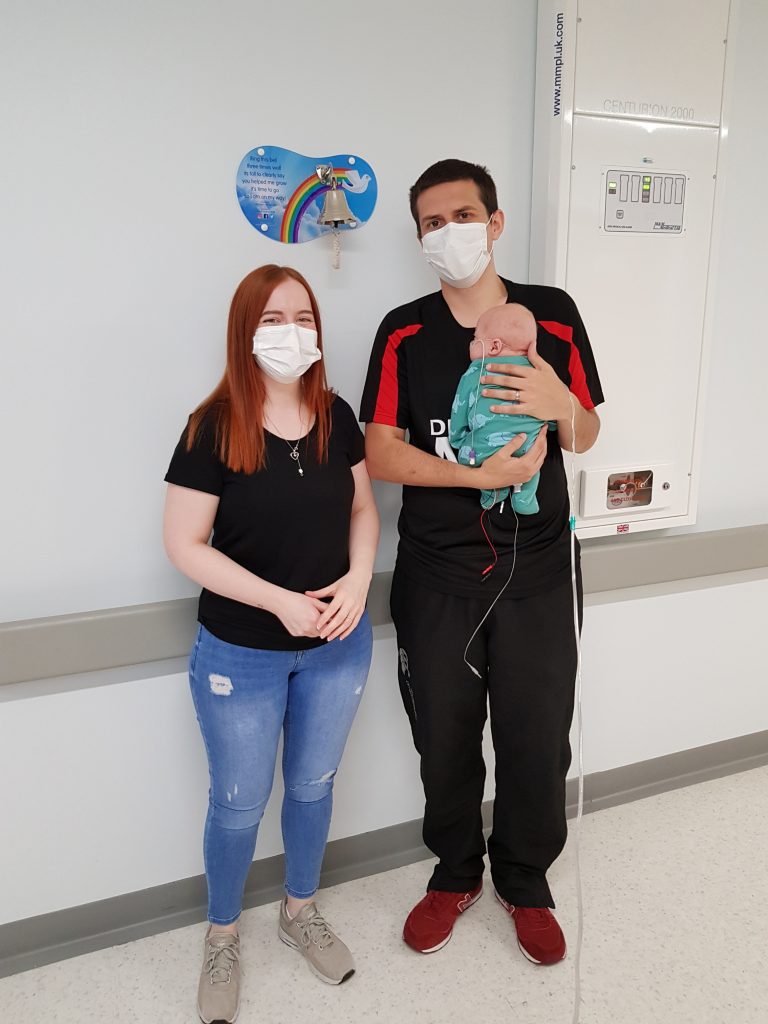 Thankfully, there were no more major setbacks for Taliesin after that.  By the end of May last year he was well enough to be transferred to a hospital closer to home in Llanelli. Then on the 20th of July, for the very first time, five-month-old Taliesin finally went home.

Liz says: “I cried for hours on that first night. I just couldn’t believe that we were finally home after being right on the edge of losing him so many times. Before I’d got up to express to the sound of an alarm but now I was getting up to the sound of his cry.   I could do everything that most people would take for granted like play with him and dress him without worrying about dislodging a wire or a monitor going off.  He was finally ours.”

Being home also gave Liz and Rhys the space to process their experience and earlier this year they decided to give something back through fundraising.

Liz says:  “One of the mums I met on NICU shared a link to the Noah’s Ark Virtual Half Marathon and it made me think of the food we received and the equipment like the ventilator,  pumps and incubator funded by the charity that helped save Taliesin’s life.  That was all made possible through the kindness of strangers and it felt like a good way for us to pay that kindness forward.” 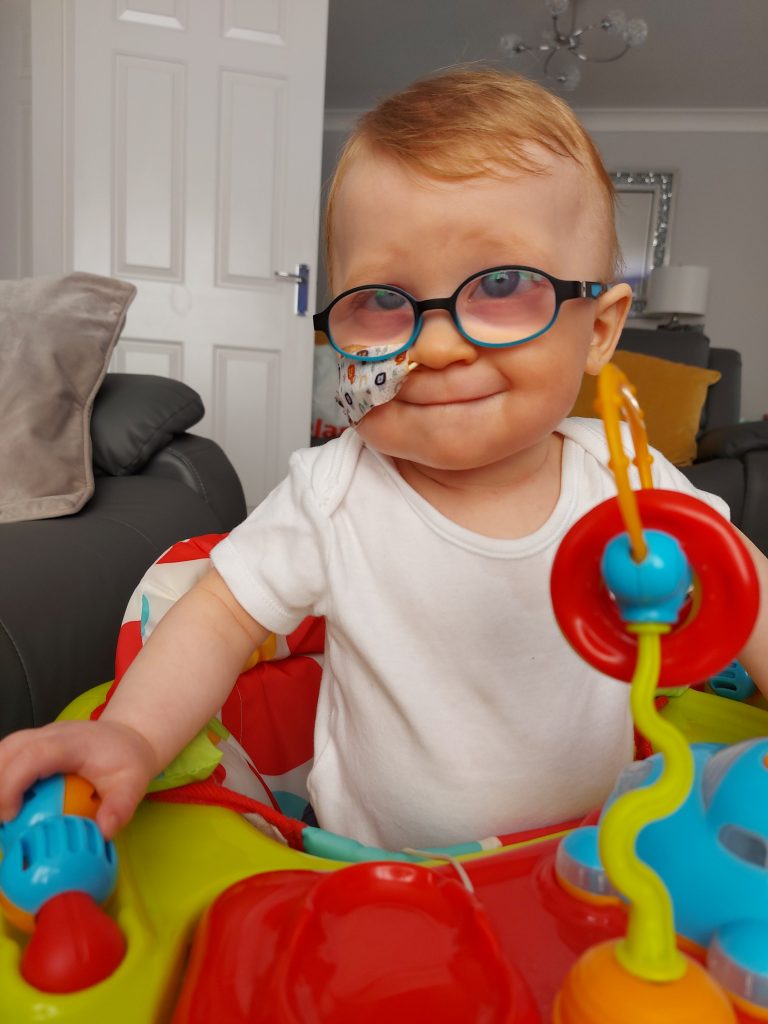 Taliesin is now 14 months old and though he continues to face medical challenges he is full of beans and reaching all his developmental milestones.  He’ll remain under the care of the specialist team at the Noah’s Ark Children’s Hospital in Cardiff for some time yet, which is another reason why the family support the charity.

Liz says:  “Before Taliesin was born I would never have imagined that experiences like ours exist but they do –  all of the time. Once you are in that situation though, you quickly begin to appreciate how vital those services and the people who support them are.  From the incredible medical teams that cared for Taliesin, the state of the art equipment that kept him alive and the seemingly little things like food that gave us one less thing to think of, it all played a vital part in getting us where we are now – home and happy.”