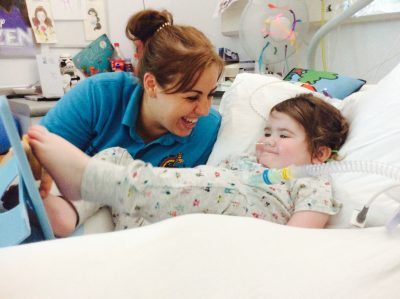 On the day she became ill, Felicity, now known to everyone as Fizz, had enjoyed a lovely afternoon decorating the Christmas tree with her brother Dylan and mum, Fran. Fizz, who was two at the time, had been running a bit of a temperature that day but Fran thought she’d caught a cold from her brother who’d been unwell the previous week.

Flizz went to bed as usual but a few hours later, Fran heard a thud and walked in to find her daughter on the floor, completely unable to move and screaming in fear for her mum. Fizz was taken straight to the local A and E department but after ten hours of observation, doctors could find nothing clinically wrong and she was discharged.

Over the following days Fizz was seen several times by local medical teams but each time Fran was told that they could find nothing wrong. Eventually she was seen by a doctor who insisted on an MRI where a swelling on her spine was detected. However, during the procedure Fizz’s  condition deteriorated significantly and she was rushed straight to the Noah’s Ark Children’s Hospital for Wales paediatric intensive care unit. 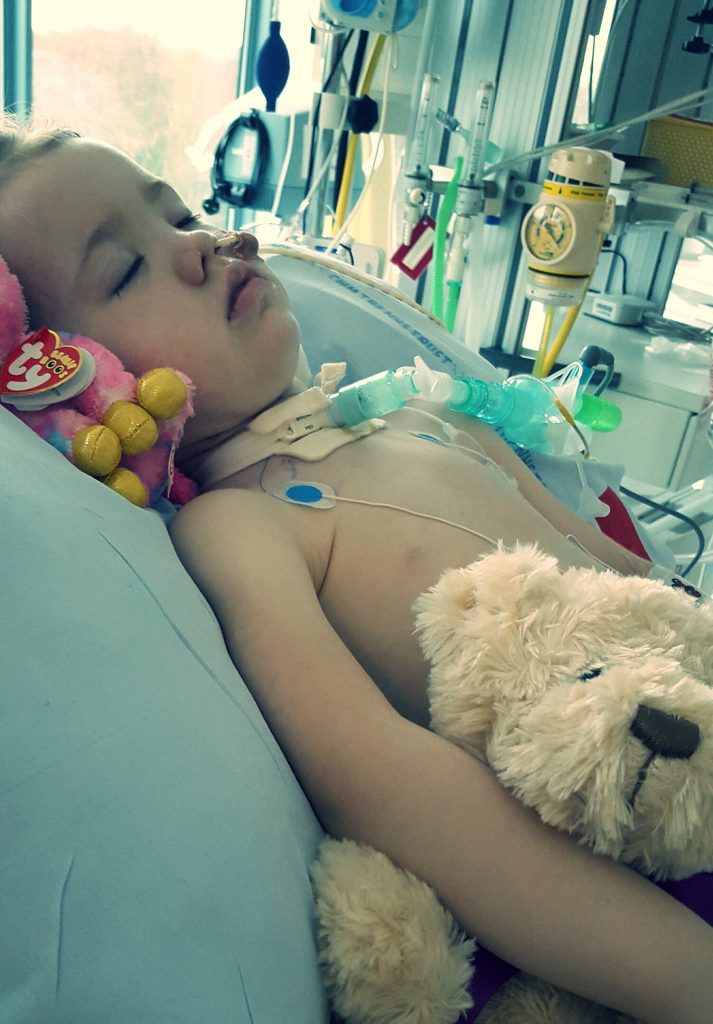 While her medical team did everything they could to make a diagnosis, Fizz’s condition continued to worsen and her distraught parents were told to prepare themselves for the worst. With a temperature of 43 degrees she was drifting in and out of consciousness and, unable to move even her eyes, Fizz was completely locked in.

Fran says: “Fizz had always been such a strong, independent little spirit, always looking after her brother despite being the youngest, always dancing and dressing up and getting up to mischief.   Despite the fact that she was now lying in a bed so ill and unable to move, I knew she was in there somewhere and I knew that she was going to be ok.”

After receiving a plasma exchange things started to look up for Fizz and she began to regain the movement of her eyes. But with her condition slightly more stable, the team caring for Fizz started to become concerned about her emotional state. Although Fran tried to engage her daughter with her favourite books and films, she was withdrawn and depressed, clearly shocked by her experience and frustrated at her inability to move.

“But all that changed when the play specialists arrived” says Fran. “They didn’t let the fact that Fizz couldn’t move stop them from getting her active, they just took her hands and she painted and glittered through them.”

“Sue, one of the play team would sit by Fizz’ side for hours humming and one day, keen to communicate again, Fizz started humming back and in no time she was saying Mum again. “

Despite still being able to breathe, eat or move more than her face unaided, Fizz spirit was back and soon she was well enough to be discharged on to a general ward. There, with the help of the medical team and the people she now called her “best buddies”, play specialists Kelly, Sue and Laura, she continued to improve.  Fizz’s body started waking up from her toes up and very quickly she became deft at painting and playing with her iPad with her feet, creating Mother’s Day cards and artwork for her favourite people. 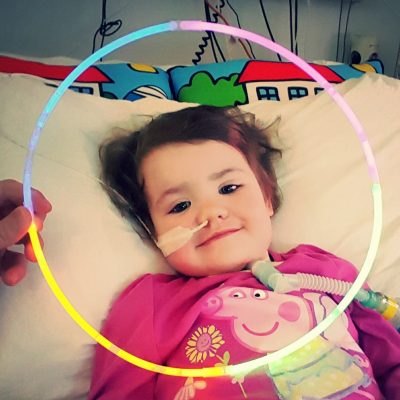 Fizz’s hospital rehabilitation was long and often painful but mum Fran says that the play specialist team were there every step of the way, providing distraction and coping strategies during hard times and creating fun and light relief at others.

As she was unable to breathe unaided anymore, Fizz had a tracheotomy so that she could be ventilated. This also meant that she couldn’t cough or clear her throat so had to be connected to a machine on a daily basis to do this for her.

Play specialist, Kelly, says: “Fizz hated both the tracheotomy and the machine at first so we customised a doll for her complete with its own trachy so that we could practice all the daily procedures on that. By turning it in to a game it helped Fizz process what was happening to her and took some of the fear out of it.  She became quite happy with her trachy and called it her ‘necklace’.”

As Fizz was tube fed, she also needed to learn to eat again but without having done so for more than six months, she was understandably apprehensive. She refused the pureed food at first but then, remembering her love of dinosaurs, Kelly brought green colouring and when they offered Fizz ‘dino food’ on their next attempt, her fears were forgotten.  Seeing her daughter’s face light up when she tasted food again for the first time  was one of the highlights of Fizz’s recovery for Fran in those early days.

Play specialist, Sue, says:   “If I had to sum Fizz up in one word it would be unique.  From the first days of our time with her on intensive care, there wasn’t a day when we saw her without her smile, despite all the things she’s had to cope with.”

Co-team member, Kelly, agrees: “Fizz is just amazing.  She’s extraordinarily brave and has had things thrown at her that even as an adult I couldn’t cope with, but she’s done it all with a grin on her face.”

And the admiration is very much reciprocated by both Fizz and Fran. “It’s the play specialist team team that helped Fizz find her smile again and there are no words in the world to describe how grateful we are to them for that. They’ve acted as an advocates for Fizz, harnessing her with coping strategies when she needed them but also reminded us that despite her additional needs, Fizz was still the little girl she always was. They kept Fizz happy, my husband and I sane and they even went out of their way to help my little boy Dylan to process what’s happened by making a book for him.

“Basically, they’re amazing. I just hope they all know that.” 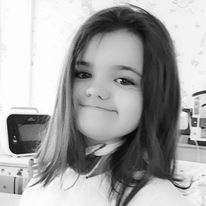 By July, Fizz was well enough to be discharged to her local hospital and a few weeks later returned home to her family. At that point Fizz still needed at least three litres of oxygen to keep her sats at a safe level. On the day of her fifth birthday, she had open heart surgery to try and address the problem and since then she hasn’t needed any oxygen and has gone from strength to strength.

Fizz is now nine and is a full time pupil at Jubilee Park Primary. Though she suffers from selective mutism, she’s slowly starting to find her voice in class.  Fizz is increasingly spending more time off her ventilator, is feeding orally more and more, has learnt to pull herself up to sit and can stand up with no support. Fizz quickly became adept at writing, painting and playing the ps4 with her feet but has recently started writing with her ‘sleepy hand. She’s also determined to walk again and anyone who knows Fizz has no doubt that she’ll get there.

Despite having been home for many years now, Fizz still talks about her “buddies” at the Noah’s Ark Children’s Hospital and has returned several times to deliver gifts for the children bought with her own pocket money. Last year, Fizz became a young ambassador for the charity and has recently raised £300 for Noah’s Ark by cutting of 17 inches of her hair.  Fizz’s hair will be used to make wigs for children experiencing hair loss due to chemotherapy.