The cardiology unit here at the Noah’s Ark Children’s Hospital for Wales treats around 4,000 children each year. You help us support the unit’s life-saving work by enabling us to fund specialist equipment that detects and diagnoses heart conditions, even before birth.  Early diagnosis allows the clinical team to then plan the safest surgical and treatment option for each child.  Here’s an example of the impact your donations make. 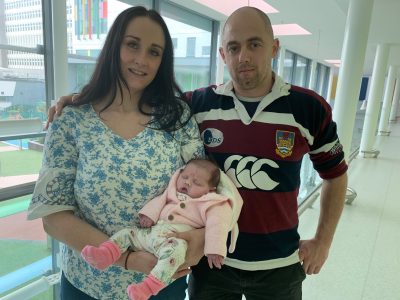 Ellie and Scott were at their routine 20 week scan when they were first told there may be a problem with their baby’s heart.  The news was followed by an agonising two week wait to be referred to the foetal medicine unit in Cardiff for further investigation.  On that first visit they met with consultant paediatric and fetal cardiologist, Dr Uzun, who told the couple that the baby’s pulmonary valve, which pumps blood to the lungs, was blocked.  The rare condition, called Critical Pulmonary Stenosis, is usually accompanied by other complications so they were advised to have an amniocentesis to check for chromosomal abnormalities.  Despite feeling that it was the right thing to do, it was a very frightening choice as the procedure itself carried a risk of miscarriage.

Thankfully though, the news was good. The baby was ok and there were no signs of any other potential complication.  But Ellie and Scott still faced an agonising wait to see whether their baby’s heart would continue to grow as it should and would return for a specialised echo scan every two weeks to check progress. Scott says the worst part of that time was the uncertainty over how things would turn out.  They bought very little in preparation and couldn’t allow themselves to get excited through fear that they wouldn’t get to take their baby home at the end of it.

As the baby’s condition was very rare, Dr Uzun consulted with colleagues both locally and abroad sharing detailed images taken on the specialised echocardiograph machine.  A decision was made that the baby would be delivered two weeks early in Bristol and if well enough, undergo an operation to correct the condition at only a few days old.

Ellie’s labour was quick and within seconds of delivery, the room was filled with 15 clinicians. Ellie and Scott only held their baby for a very short time before she was taken away to be stabilised. 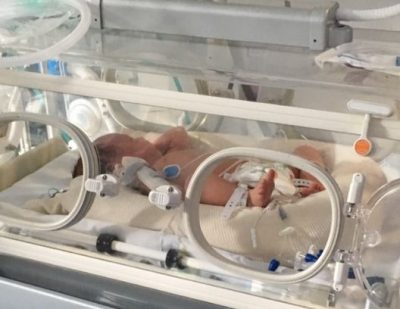 At just five days old, baby Eva underwent an intricate five hour operation to stretch her pulmonary valve.  Scott says that watching their tiny baby being taken away from them for such major surgery was the worst part.

Thankfully the procedure went well and following some recovery time in Bristol and then back at Noah’s Ark, Ellie and Scott were able to take Eva home. She still returns to Noah’s Ark for regular scans with Dr Wilson but her heart and its troublesome valve is now doing well.

Scott says: “I’m so thankful for the care Eva have received.  It’s hard to think about where we’d be without the specialist equipment Dr Uzun used to diagnose and monitor her condition and then share with colleagues to form such a successful treatment plan.  There was a point that we feared we’d never take her home.  Now we can’t remember what life was like before she came!”

If you’d like to support us in helping more children like Eva, why not join our Family Fun Walk this September.  Click here for more info,