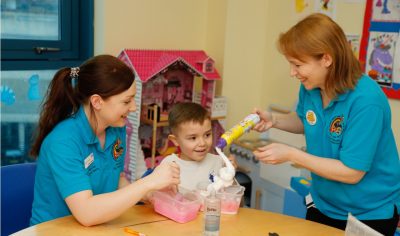 Here at the Noah’s Ark Charity, we’re extremely proud of the play team and so should you be – because it’s with your continued support that we can help fund their vital work with children.

The play team covers the whole hospital, supporting children and families with everything from food aversion, preparation for surgery, parent and child bonding and reaching developmental milestones. As well as providing distraction for children during treatment and procedures, they also use play techniques to help alleviate anxieties in the lead up.

Catrin and Allison are registered play specialists on Rainbow ward – the children’s cancer unit here at the Noah’s Ark Children’s Hospital for Wales.

Allison worked on the children’s assessment unit before moving to Rainbow ward. She says that the principles and skills you apply as a play specialist role are pretty much universal but there are always little adjustments to be made according to the young patients you’re dealing with.

She says: “When I first meet a family on Rainbow it’s a lot like meeting a family for the first time in the assessment unit. Very often the parents are a bit overwhelmed by what’s going on and the child can be scared because they’ve never been to hospital before. Your first job is to offer empathy and understanding to the parents which help builds a rapport. With the children what’s most important is that we gain their trust. Play is innate in children so when we start doing that the walls come down really quickly. Getting to know their likes and dislikes is a really key part of the trust building too so they feel confident that we know them and care. That way when we get to the point where we start explaining the medical procedures and treatment we can do it in a way that’s relevant to them. We never lie if we know something’s going to hurt. We’re honest so they can always have faith that what we’re telling them is the truth.”

Allison and Catrin use a variety of toys, books and equipment to help support the children they care for. Allison says that Ollie the Lion is a particular favourite when explaining one of explaining hair loss, a side effect to chemotherapy. Allison says: “Some of the children don’t mind too much when their hair starts to fall out but others can be really effected. Ollie has a mane that comes off but then he has other different types of manes that we can put back on. Hair always grows back differently after chemotherapy so Ollie helps us explain that yes hair falls out but it also grows back and that it’s probably going to look very different to what it looked like before.” 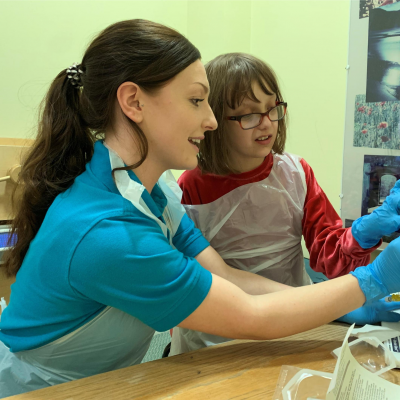 Holly has been a patient on the oncology unit since last June and is in the middle of a year-long course of chemotherapy to treat a number of tumours on her optic nerve. Before her treatment could begin Holly had an operation to fit a port, a small disc that sits under the skin. The disc is attached to a tube which connects it to a large vein so that chemotherapy can be administered through the port with a needle. When registered play specialist, Catrin, first met Holly she was terrified at the thought of starting chemotherapy after a previous bad experience with a needle. Holly’s anxiety was so bad that she used every diversion tactic possible and if she did make it to the treatment room she would move and pull away in fear, making the procedure unsafe. Holly was so upset that a decision was made to delay treatment so that Catrin could work with her.

Catrin says: “A new cancer diagnosis is extremely frightening for parents but for children it’s often the practicalities that scare them the most. Everything is different, from their routine to the people around them and it’s our job to help build their trust. Like many children, Holly was very scared of needles and was understandably worried that the procedure to connect her port to the chemo would hurt. So I introduced Holly to Chester our chest mannequin. Holly and I went through every step of the process so that she could practice doing it herself, from putting on gloves and aprons like the nurses would do right through to inserting the needle in to the port and connecting it to the medicine. We’d do this over and over, paying particular attention to the bits she feared most and with a lot of positive re-enforcement Holly’s anxiety started to lessen.

“In order to make Holly feel like she had an element of control, we also talked about the things she could decide on during her treatment like where she would sit, who would wipe off her ‘magic cream’ and what she’d like us to distract her with while the procedure was taking place. We also talked about the fun things she’d like us to do together afterwards so that the focus started to shift away from the not so nice bits to the fun activities that would follow. Finally, when she was ready, we went for it and after her first very positive experience, she hasn’t looked back.

Nowadays Holly’s confident enough to receive her treatment with a community nurse at home and looks forward to her visits to the children’s hospital.

Holly says: “Catrin is nice, kind, awesome and fun. She has helped me feel less worried and scared. We played with Chester together when I was scared. I feel OK now when I come to Rainbow ward and I look forward to seeing Catrin. We don’t need Chester anymore but after my treatment I get to choose a fun thing for us to do together like decorate biscuits or make slime”.

NB. The pictures in this article were taken before Covid-19.