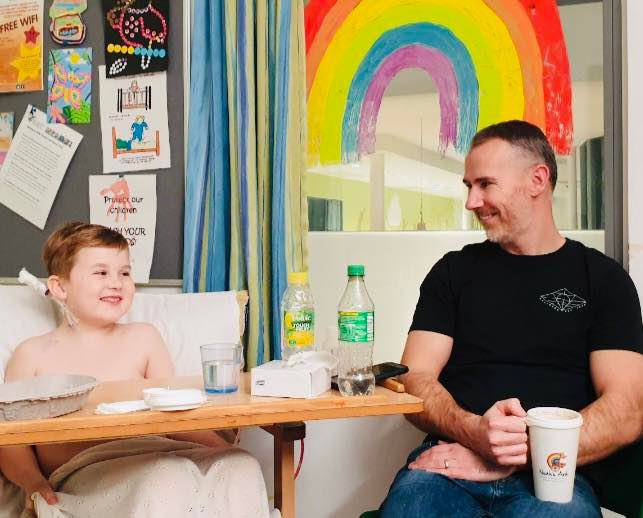 Eight-year-old Isaac’s build up to Christmas was disrupted abruptly in December when what started with a pain in his hip ended in an eleven day stay in hospital and six days on dialysis.

When Isaac, from Swansea, started complaining of pains in his hips at the beginning of December, parents Jonathan and Amy initially thought it was an attempt to get a day off school. But within 24 hours, a now clearly suffering Isaac was unable to walk. After a trip to A and E and a night in hospital, Isaac was diagnosed with irritable hip – a painful but not un-common condition in children. Isaac was sent home to rest and told that the pain would pass within a few days.

But back at home, Isaac was off his food and started to develop stomach pains. After a few days with no improvement, he woke up one morning looking pale and puffy and his concerned parents took him back to A and E. Isaac was admitted for tests which revealed, to the complete shock of his parents, that Isaac’s kidneys were failing. They were told that Isaac needed transferring to the Noah’s Ark Children’s Hospital but, despite being classed as an emergency, the family had to wait many hours for an ambulance. It’s an experience Amy describes as terrifying.

When they finally arrived in Cardiff, Isaac was taken for a kidney biopsy. While there he also had an intravenous line inserted in to his neck to take blood and administer his medication.

Amy says: “It had been really difficult to take blood from Isaac because he was so puffy and he found it very distressing as a result so it was a far better for him to have the line put in. The consultant had told us that Isaac could be suffering from one of two kidney injuries caused by a previous undetected infection. But the results of the biopsy revealed that he had both – something he’d never seen before!”

Isaac was put on haemodialysis for four days followed by a three day course of steroids which, much to the relief of his worried parents, worked! After joining the Christmas glowstick disco from his room on Pelican Ward, Isaac was well enough to go home to spend Christmas with his family on the 17th of December.

Isaac’s now back in school and doing really well. He’s even signed up for our Step Challenge and got his mum, dad and brother, Jacob, to join him in his fundraising efforts too! They whole family were at home with Covid recently but Isaac didn’t let that stop him. He put his time to good use running up and down the stairs and around the garden in a bid to beat everyone else’s step count. The family have so far raised close to £2,000 for the Noah’s Ark Children’s Hospital Charity!

Thank you for being so amazing Isaac. We’re so glad you’re feeling better.

For more information about our Step Challenge, visit the event page here.