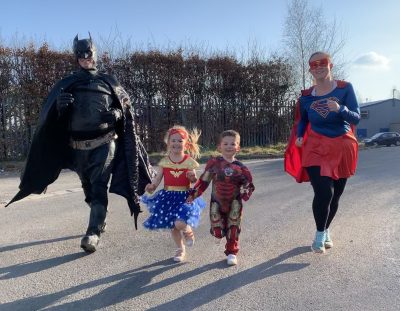 Noah’s Ark family ambassadors Laura-Jayne, Russell, Emily and Oliver have signed up to take part in our brand new family friendly 5k Superhero Dash this September to fundraise for the Noah’s Ark Children’s Hospital Charity, have you?

The Evans family have been fundraising for the Noah’s Ark Charity ever since Emily was an inpatient as a tiny baby.  They say it’s then that they realised the importance of fundraising for the charity to support the work the hospital do.  Just after Emily and her twin Oliver were born almost seven years ago, it quickly became clear that Emily was experiencing feeding difficulties and was vomiting and losing weight rapidly. The community midwife had Emily admitted to their local hospital where doctors tried to control her weight loss and work out what was wrong. 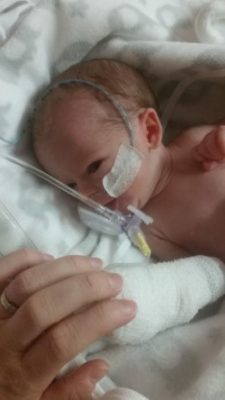 s suspected was a blockage at the base of her stomach. Her condition failed to improve and despite now being fed through a drip, the vomiting and weight loss continued. The priority now was just getting enough nourishment in to Emily to keep her alive so she was fitted with a Hickman line so that she could receive nourishment intravenously.

Eventually, Emily’s medical team discovered an obstruction in her esophagus which was corrected with surgery and finally, after several very difficult months, Emily was well enough to go home.

As thanks for the treatment and care that both Emily and her family received while at Noah’s Ark, they held what was to become the first of many fundraising events for the charity, raising over £2,000. Since then both Laura-Jayne and Russell have become family ambassadors and the whole family have been true supporters of the cause, joining our Family Fun Walks and taking part in various challenge events. Most recently have signed up to take part in the Superhero Dash. 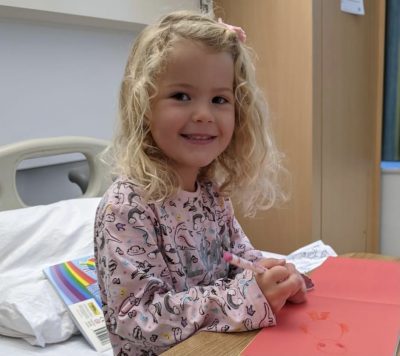 Laura-Jayne says: “Emily still receives treatment and check ups at the Noah’s Ark Children’s Hospital. We are so grateful for the care we received in the first few weeks of Emily’s life. Though I’d given birth to twins, I hadn’t been able to spend much time at all with Oliver during that first few frightening days but both the Noah’s Ark hospital and charity realise the importance of family and we were allowed to have him there with us too.  It wasn’t what I had pictured for our first few weeks as a family but at least we were together. It wasn’t until that point where we were patients that I realised how important fundraising was.

“We are hoping to raise as much as possible and I have even roped in some of the members from her running club. We’re hoping to fundraise over the summer holidays and are really looking forward to the day itself.”

If you would like to sign up to the Superhero Dash this September at Pontcanna Fields, Cardiff to be a hero to the children of Noah’s Ark click the button below. Thank you!