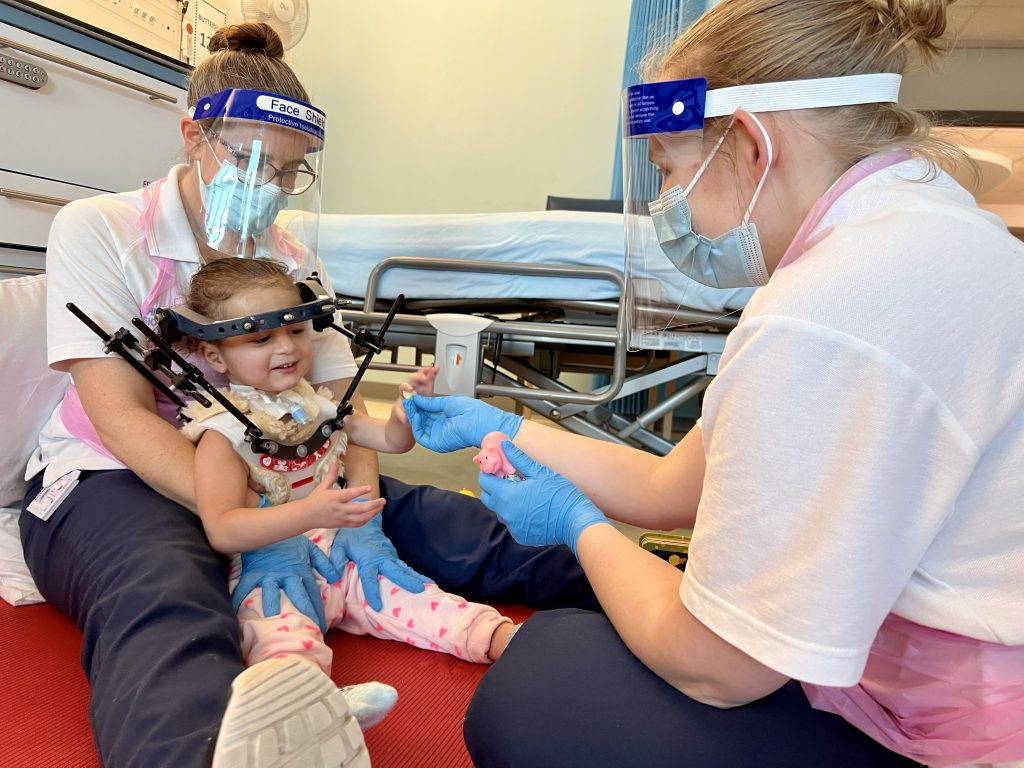 Magda was driving home after visiting her sister in Merthyr when a head on collision almost claimed her family’s lives.   Both 18-month-old Alice and her three-year-old sister, Maya, where in the back of the car when a vehicle coming from the opposite direction veered into their lane. The combined impact of the head on crash was more than 110 miles an hour.

Miraculously, Magda was able to get out of the car and take both children with her.  She can’t recall the detail of what happened immediately after that, but she does remember both her children being taken away by ambulance and waiting, not knowing if they would be ok, for her own. 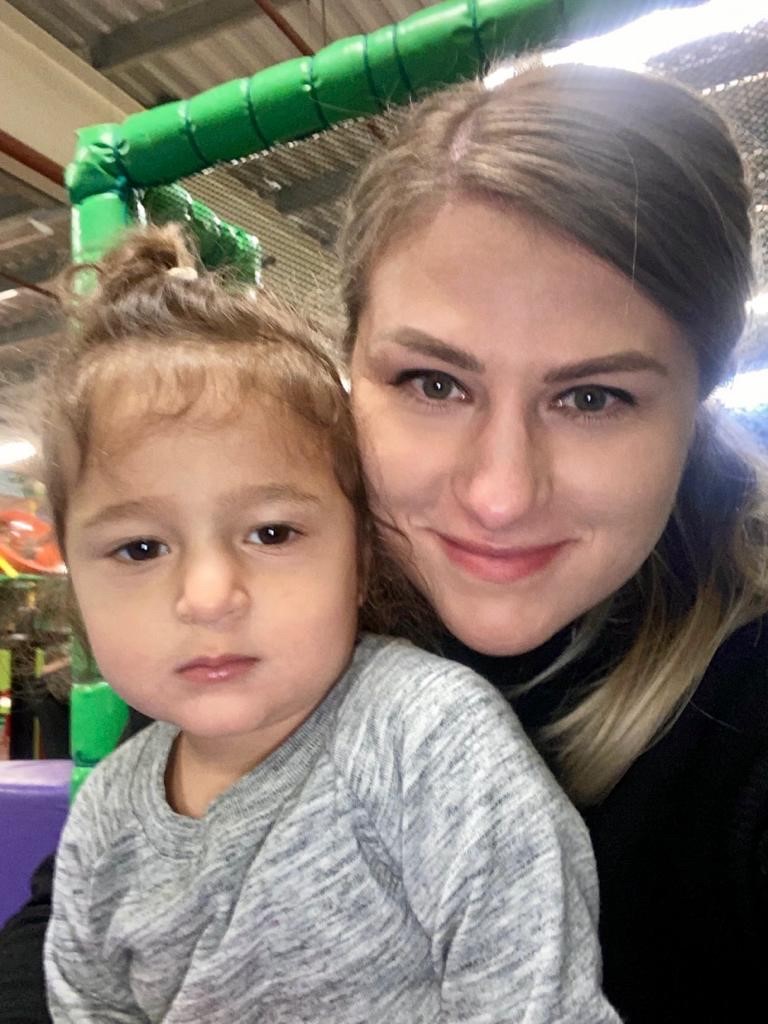 Alice and Maya were taken to their local hospital while Magda was taken straight to the A and E department at the University Hospital for Wales. She was suffering from facial injuries, a bruised hip and a very badly broken wrist, but all she could really think about was her children.  Magda was able to contact her sister who rushed to the hospital to be with her nieces and after what felt like a painfully long time, Magda got the call to say that Maya had suffered bruising and a broken arm but was otherwise ok.  Toddler Alice, however, had not fared as well.   She’d suffered injuries to her spine and was being rushed to A and E in Cardiff for further investigation. 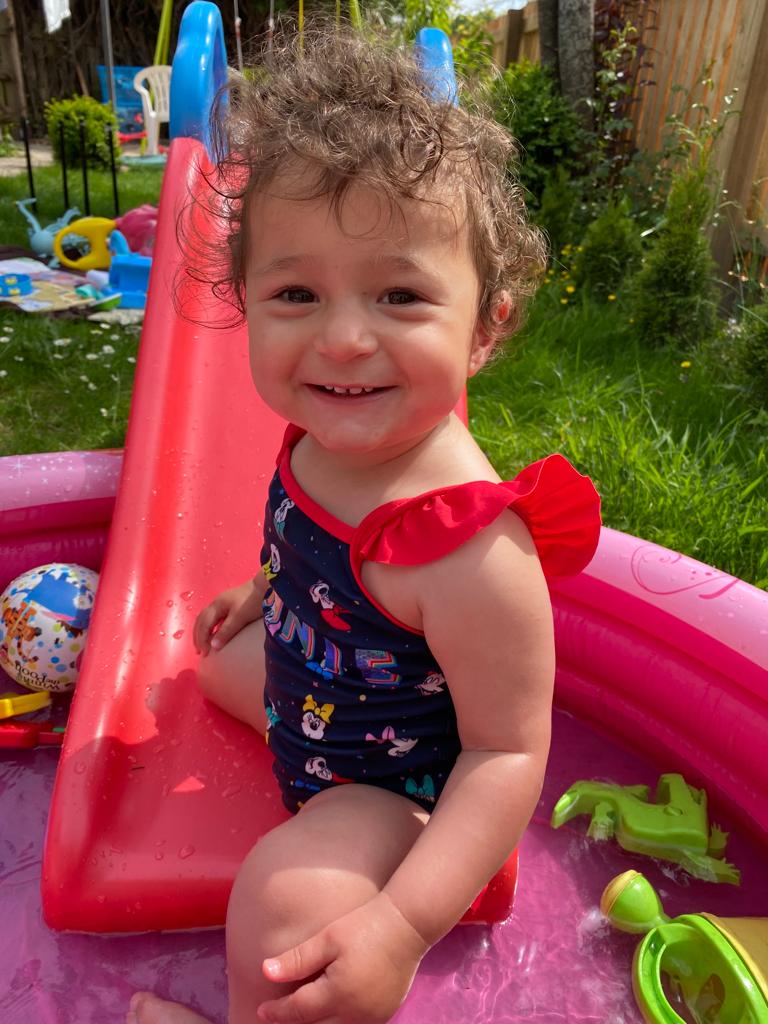 On her arrival, Magda was able to see her youngest daughter for a short while.  A specialist doctor explained that Alice’s spine had been broken between the first and second vertebrae in her neck. She was being intubated and put in a coma to keep her completely still and then taken to the paediatric intensive care unit where she would be placed in halo traction. Magda was told that the instances of such a small child incurring and surviving such an injury where so rare that they would have difficulty finding a halo small enough to fit.

On being discharged from A and E herself the following morning, Magda went straight to PCCU where she was greeted with more frightening news.  The bruising around Alice’s spinal cord would be potentially lethal if it were to travel further up towards her brain. Tests also showed that the spinal injury had caused damage to the left side of Alice’s body and there was no knowing at that point whether it would be permanent.  Magda was suddenly having to face the very real chance that her daughter would be left permanently disabled or that she could even lose her completely. 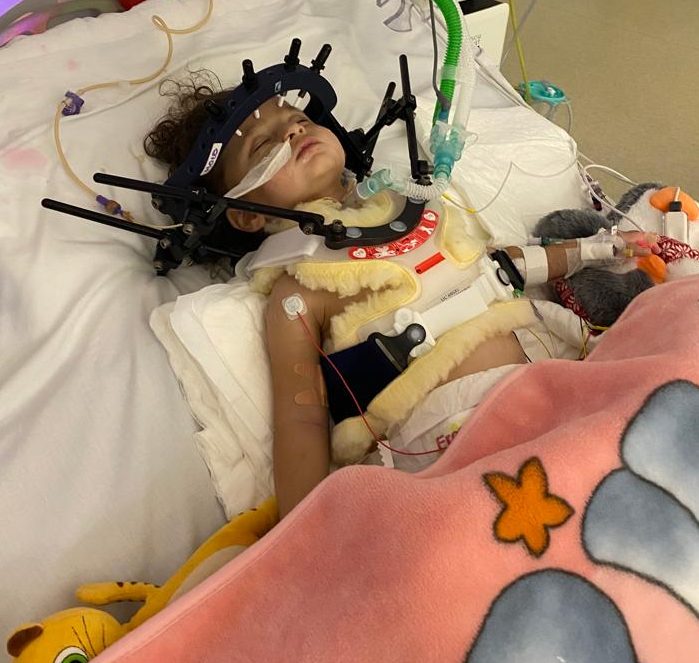 Alice was finally put in to halo traction a few days later and then, on the 16th of December, she was fitted with a tracheostomy as she was still unable to breathe for herself.  But despite the halo, the break in Alice’s spine was so unstable that even the smallest movement was disrupting the healing process.  The only option open to the surgical team was to perform surgery to insert rods in Alice’s back.  Magda said that signing the consent form felt like being in a nightmare.

Magda says: “They had told my husband and I that the operation was extremely risky but we knew that if Alice was to have any hope at all of a normal life, this was the only option.  The list the surgeon had written of the awful things that could happen was so long that it almost went off the page.  By signing that piece of paper we were giving our consent to an operation that our daughter might never come back from. It is by far the most difficult thing I have ever done in my life.”

Thankfully, the operation was a success and gradually, in the week leading up to Christmas, her sedation was reduced and Alice began to wake up.  By now, the normally busy and active toddler had been kept almost completely still for three weeks.

The physiotherapy team were involved in Alice’s care from day one, leading on her positioning whilst awaiting her surgery and keeping her chest clear whilst on the ventilator. Then, as her spinal injury started to heal and Alice became more conscious, the team very gradually began to use resources provided through the early mobility programme to help Alice progress.  They started gently, using sensory equipment to encourage the toddler to first move and then strengthen the limbs on her weakened left side. 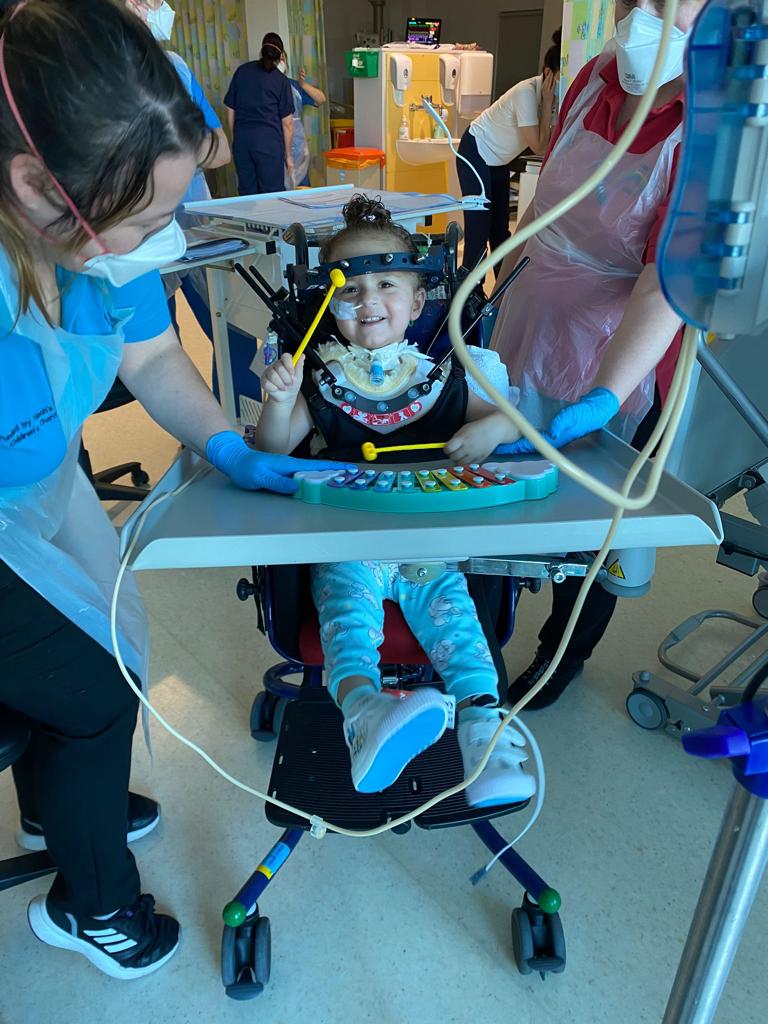 As she continued to stabilise, Alice had a lot of early rehabilitation on PCCU and involvement from the therapists within the major trauma team. She had daily play therapy to strengthen her left side and eventually the physio team and occupational therapists were able to sit Alice up, supported by a specialist chair.  After many weeks of being at her daughter’s bedside unable to hold her, the physio team helped Magda to cuddle her daughter for the first time since the accident in a new specialist armchair. Alice also stood for the first time in a supportive standing frame.

Still unable to talk because of her tracheostomy, the physio and speech and language therapist also helped Alice to communicate with her mum again.  They recorded the word ‘Mama’ on a big red button that Alice learnt to tap for her mother’s attention.  The device called a Big Mac turned out to be very good exercise for the left arm that her mum feared at one point she would never move again.

By the end of January, Alice had made so much progress that she was able to leave intensive care to continue her recovery on Owl ward. Alice has since had both her halo and tracheostomy removed and, to the delight of everyone, has started to walk again.

Magda says: “It’s been the worse three months of our family’s life, particularly as we’ve had to spend so much time apart at a time when all we want to do is be together.  But there have been so many miracles too.  We’ve heard so many times how lucky we all were to be alive after an accident like that and even more so that Alice survived such a terrible spinal injury. Then to have this wonderful hospital with so many specialisms to care for Alice feels like a gift.

“I was so terrified that Alice would be paralysed when this first happened, but the physio team came every day, building both my confidence and Alice’s until she was able to sit and even stand again.  Now you can’t even tell the difference between her right side and her left! We’re so thankful to them all for what they have done.”