The 20th of February 2016 had been a day like any other for the Beach family.  Dad, Ben, had been busy finishing off some DIY on the house and Sarra and the couple’s 14-month-old son, Clark, were keeping him company while dancing together to Taylor Swift.

Clark went down for his afternoon nap as usual but when he woke up at six, Ben and Sarra noticed that he was hot and shivery. They gave him Calpol and tried feeding him dinner, but Clark refused it.  Despite putting him in a cool bath, his temperature continued to rise and at 9pm his breathing became laboured and he started to vomit.  Not wanting to wait for the ambulance, Ben and Sarra took Clark straight to the local A and E department.

As Clark’s heart rate was higher than it should be, the doctors who saw Clark in A and E admitted the little boy for a course of antibiotics as a precaution against meningitis. He was put on an IV drip and given more paracetamol to keep his temperature down but was still sitting up in bed appearing relatively ok until at 3am, Sarra noticed one tiny spot on his groin.  Clark did have meningitis and despite the antibiotics, his body was going in to septic shock. 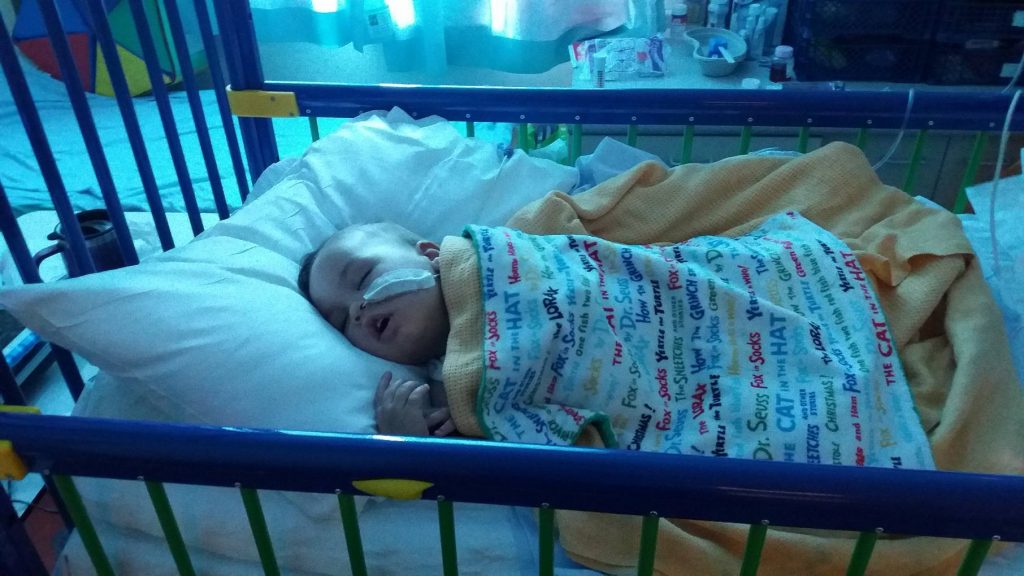 “That was the point where everything took a sudden and very dramatic turn for the worse” says Sarra. “More spots were appearing before our eyes and within 15 minutes the room was filled with people. They sedated Clark so that they could get access to his veins as quickly as possible but his blood pressure was dropping so they were struggling. They ushered us out and we spent the next hellish hour pacing up and down a small room with our stomachs in our mouths.”

“When someone finally came in to get us, they told us that Clark was being taken to a children’s intensive care unit in another hospital. I think we were allowed to see him beforehand because they really weren’t sure he was going to make it.  We were warned that he would look completely unrecognisable to the little boy that we’d left an hour earlier and they were right.  His little body had filled and swollen with fluid and he was covered from head to toe in a rash.  The person prepping him didn’t even look up when we walked in because he was so focused on Clark and the very experienced paediatric registrar who’d been helping try to save Clark’s life was tearful. All I could keep thinking over and over again was – we’re going to lose him. I just couldn’t believe this was happening.”

Already on life support, Clark was taken to the Noah’s Ark Children’s Hospital Intensive Care Unit where the medical team tried everything they could to stabilise the little boy. When Ben and Sarra arrived, they were taken to a room and told that Clark’s chances of survival were almost zero as he was not responding to treatment. Sarra remembers screaming with grief and telling the doctors over and over to just keep trying.And that’s what they did. Every organ in Clark’s body other than his heart was now being bypassed by a machine and it took four nurses working constantly just to administer the drugs and medication that was keeping him alive.  The medical team rang every other children’s hospital looking for any further advice but were told that they were doing everything possible. The only other option available was a heart bypass but Clark’s blood pressure was so low that the procedure would have been too risky. 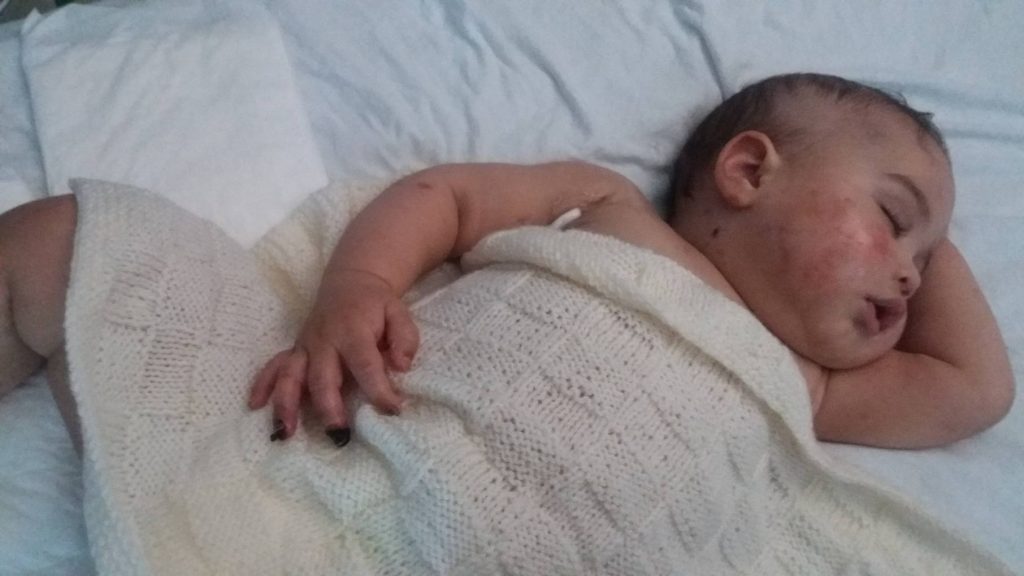 Ben says: “We were allowed to sit with Clark but every few minutes he would crash and we were taken away.  His condition was so fragile that even moving his blanket would send his body in to a tailspin and he’d need further medical intervention to try and stabilise him again.  We’d then get called back and told that he was no better but no worse – because he couldn’t get any worse.

His hands and legs were turning black because of the septicaemia and he was basically dying before our eyes.”

For many days, the doctors weren’t able to confidently give any prognosis on Clark’s life expectancy beyond the next few minutes. Sarra and Ben were offered the services of a chaplain. It was well in to the second week before they started to talk about tomorrow and even then his infection markers were climbing due to the onset of gangrene in his left leg.

On the 1st of March, Sarra and Ben were told that Clark’s leg would have to be amputated at the knee immediately if he had any chance of survival.  In any other circumstance there would be no way that a child as sick as Clark would undergo such major surgery.  Given his condition there was a very strong chance that Clark would not survive the operation, but without it he would certainly die.

Ben says: “There aren’t really any words to describe what it’s like to knowingly consent to a procedure that could very probably kill your child. Up to this point, the surgical team had been forced to perform procedures at Clark’s bedside at the fear of moving him which is in itself extremely rare.  But this time that just wasn’t an option. Our choices were certain death by saying no, or a high chance of death by saying yes – basically try or die.”

Clark did survive the surgery and as a result of the amputation, his infection markers started to decrease. The medical team tentatively started talking to Sarra and Ben about Clark’s needs if he were to survive, a long list that included skin grafts, prosthetics and a potential kidney transplant. 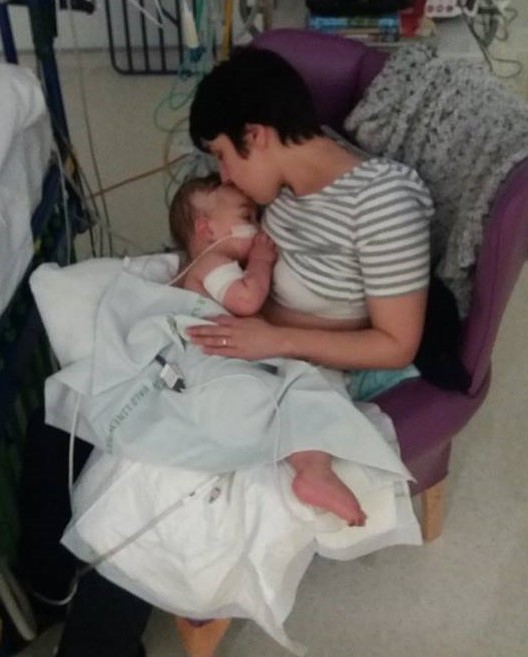 For the first 48 hours of their ordeal, Sarra and Ben hadn’t slept at all, holding a constant vigil at their son’s bedside. As neither wanted to be more than meters away from their son at any time, they then made up a bed in one of the waiting rooms on the unit. At night they would alternate in four hour shifts, one sleeping and the other sitting with their unconscious son, reading and singing to him in the hope that he could hear.

Around the four week point, Clark started showing signs that he was trying to breathe for himself and the decision was made to try and take him off the ventilator. Shortly after, Clark opened his eyes for the first time and was then moved from the intensive care unit to the high dependency unit. It was then that Sarra and Ben were able to hold Clark for the first time in 5 weeks.

Sarra says: “Eventually we were moved down to Owl ward which was obviously a huge relief in one sense but extremely daunting in others. Clark’s needs were so complex that he must literally have had access to every resource the hospital had to offer at one point or another.  He had open wounds on his back and groin that needed packing and had to undergo 12 theatre trips to correct those alone.  After weeks on high doses of strong painkillers, Clark’s also had a morphine dependency so on top of learning to move and eat and communicate again he had to overcome that too.

“For our part we were just exhausted. While Clark had been on intensive care we ran on pure adrenaline but now that we could relax a little, the exhaustion just hit us. Although we weren’t fearing for Clark’s life in terms of survival anymore, we knew that life as we knew it had changed for ever and we were feeling grief at the loss of the future that we’d envisaged.” 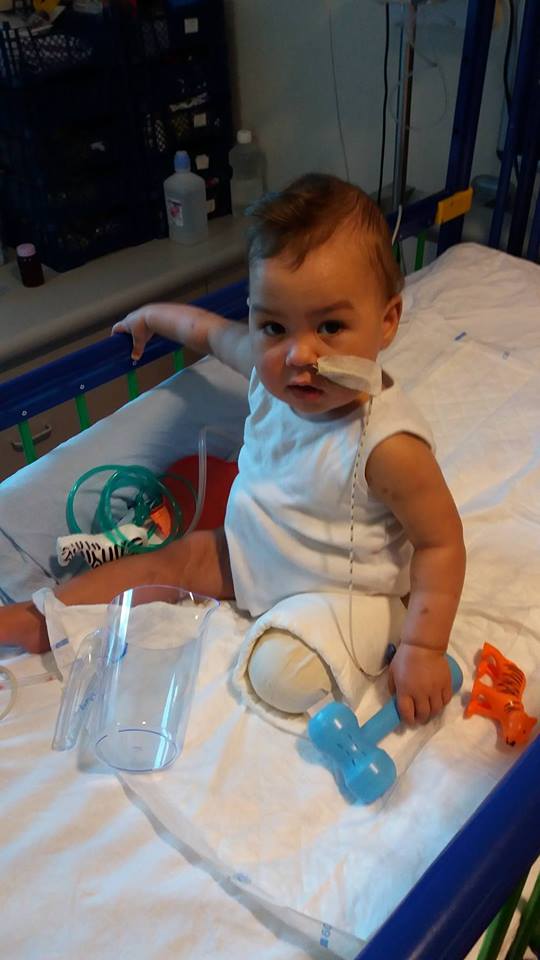 Clark spent many weeks on Owl and Jungle Wards, re-learning all the things he’d been able to do before falling ill, like rolling and sitting. After weeks of being tube fed, he even had to learn to eat again and the play specialists and physiotherapy team worked with him intensively to try and make the process less traumatic. He was finally discharged to continue his recovery at home in may that same year.

Sarra and Ben are acutely aware of how close they came to losing Clark. They feel forever indebted to the countless medical professionals who at first kept him alive and then supported him through months of rehabilitation. They’re also thankful for the care that Clark will continue to need as he grows.

The pictures speak for themselves, suffice to say that this remarkable little boy continues to tackle life head on.  Clark, who is now six, loves school and is very glad to be back now that restrictions have eased.  He has an activity limb (a small running blade) that helps him keep active and participate in school PE and he was recently awarded a headteachers certificate which he’s very proud of.

Sarra has taken up sewing so that she can alter Clark’s clothing, making it easier for him to dress independently around his prosthetic leg.. He also has a brand new wheelchair and his parents have signed him up for lessons through Wizz-kids/Go-kids-go to improve his skills and confidence. He’s also looking forward to starting swimming lessons with a specialist instructor now that life is returning to normal after Covid-19.

Clark is still a patient at Noah’s Ark and returns frequently to hospital for reviews and small operations. Ben says: “Clark’s story perfectly illustrates why having a children’s hospital is so vital. Having equipment, medical expertise and facilities that are specialised for children all under one roof makes such a difference.  We were told by the intensive care team when Clark was ill that he wouldn’t have made it as far as the next closest children’s hospital. For us it’s pretty simple – without the Noah’s Ark Children’s Hospital we wouldn’t have our son.”