13-year-old Emily has been a Noah’s Ark patient since she was three days old. Born with cystic fibrosis, she usually visits the hospital twice a year for treatment. This year though, shortly after one of her routine two week stays, Emily fell ill and had to return to the Noah’s Ark Children’s Hospital of Wales for emergency surgery. Following her operation, Emily developed an infection on her already compromised lungs and her condition deteriorated. 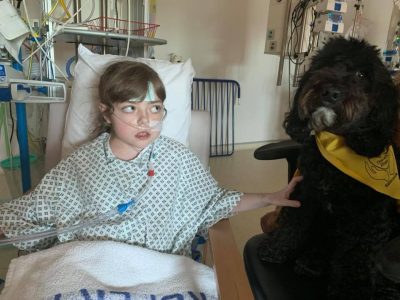 What followed was a long 14 week stay on the paediatric intensive care unit where at various points Emily was ventilated because she was unable to breathe for herself. She developed infection after infection and eventually her lungs collapsed. At one point, her parents were taken aside and told to prepare for the worst.

But as always, Emily’s medical team were determined to get her well again and after many long distance calls and on specific compassionate grounds, Emily was approved as a candidate for a breakthrough drug from America. She was the first child in the UK to receive it and the effects, says her mum, were nothing short of miraculous.

Mum, Shirley, says: “The response was immediate. Her secretions started reducing dramatically, she was well enough to get out of bed for the first time in months and within two weeks we were back down on Island ward. We are so thankful and grateful to the CF team and all the medical staff involved with Emily’s care during her admission for their outstanding care, expertise and commitment to aid her recovery.”

While here, Emily met our therapy dog Nico several times and during her rehabilitation her physio team incorporated Nico in to her sessions to motivate her to walk again. Thanks to some of our brilliant supporters we were also able to arrange treats and visits for Emily to break up her long days.

Emily says: “I really enjoyed meeting Nico! When he came for the first time I was really excited because I hadn’t seen my dog for a long time and he was the closest thing to him. After that he carried on coming to visit me and he would relax on my bed next to me. I also got the chance to walk him, which was very exciting as it was a surprise. The physio’s gave me a challenge to walk Nico because I hadn’t walked for many weeks and it gave me something to aim for to get stronger to be able to do it. Every time he came he made me smile and feel better.

Some of the other things that I had was the glitter fairy and two flautists came to play for me. I also had my nails painted by one of the staff from the Noah’s Ark Charity.” 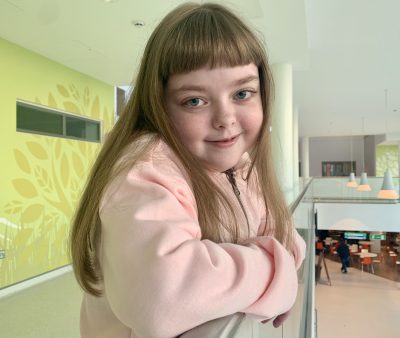 After 20 weeks in hospital, Emily was finally well enough to home last month and hopes to go back to school early in the New Year. The improvement in Emily feels nothing short of miraculous to her parents and those who have cared for her here at the hospital and it’s brilliant to see her smiling again.