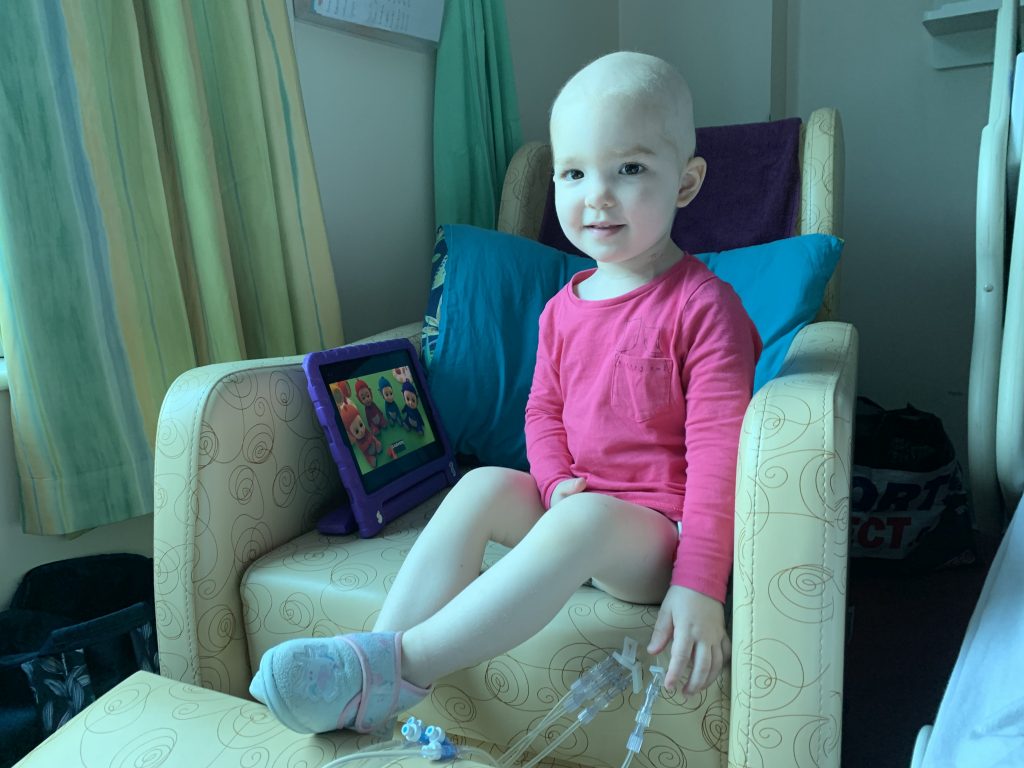 Emmeline doesn’t really remember life before restrictions.  She was just over a year old when Covid-19 hit and not even two when she was diagnosed with cancer. Her life, certainly for as long as she can remember, has been her immediate family and hospital life.

Emmeline’s parents, Clare and Mike, first realised something wasn’t right with their daughter in July last year. They noticed a small dip in her lower back and though they didn’t think anything of it at first, the area began to swell and they decided to get it checked.  At the local hospital, Clare and Mike were told that their daughter probably had a cyst but were given a referral to the surgical department at the Noah’s Ark Children’s Hospital just in case.  While they waited for the appointment, both the lump and the swelling increased and by the August bank holiday, Emmeline was in so much pain that she couldn’t sit down and had taken to eating while lying on her stomach.

Clare says: “We called Noah’s Ark and explained the situation and were told to come straight down.  It was a struggle to get Emmeline into her car seat because she was in so much pain. Over the next few days, the doctors did scans and took bloods and we took it in turns to be with Emmeline as the one parent only policy meant that we couldn’t both be with her at the same time. But when they called us in for the diagnosis, they asked for us both.  I thought at the time it was because I was pregnant and they didn’t want me to wait in the car but looking back now, I know why.

I honestly don’t think cancer had crossed my mind but somehow when they told us, it didn’t come as a surprise.  Emmeline had something called a germ cell tumour on the base of her spine which had already started to move into her coccyx and lungs. The first thing we both wanted to know was “what next” and it was a relief to know they already had it all planned out.  Emmeline would have a portocath fitted the next day ready to start six cycles of chemotherapy that would last four months followed by surgery to remove the tumour.

Emmeline responded well to the treatment but it took a while for her to adapt to her new situation and surroundings.  Usually, a very active and independent toddler, Emmeline was now attached to tubes and drips and the familiarity of her home and family were suddenly replaced by an unfamiliar hospital and strangers doing things to her that she didn’t understand.  Clare says that seeing her usually happy and easy-going toddler both in pain and distress was by far the hardest part.

Clare says: “For Mike and I, juggling Emmeline’s treatment routine became our new normal.  It was incredibly hard not to be together while Emmeline was in hospital but we just got through it because we had to.  Mike was fitting hospital visits around work and I could only care for Emmeline during her time at home because I was heavily pregnant. There was a risk to the baby being in hospital for her radioactive scans and it was uncomfortable to sit for hours while she had treatment. This was heart breaking because it meant I wasn’t able to be with her and we couldn’t be there together during her chemo. And of course, there was the added difficulty of having to keep our distance from friends and family who would usually have been there to help.”

Emmeline had her last course of chemotherapy on New Year’s Day and a successful operation to remove the remainder of the tumour at the end of January.  She recovered well and only had to return to the hospital for check ups.  By April, with a date to have Emmeline’s portocath removed in the diary, Clare and Mike were allowing themselves to plan for a family life after cancer treatment.  Unfortunately, this was short lived. A routine blood test showed a slight increase in infection markers and a follow up check revealed further elevation.  Though smaller and flatter this time, Emmeline’s tumour had returned and the family, now with the new addition of baby Edward, were back on the rollercoaster.

Clare says: “That news was like a kick in the stomach but we’ve comforted ourselves with the knowledge that the treatment worked last time and that this time the tumour is smaller and more contained. Because Emmeline’s body may have built up an immunity to the previous type of chemotherapy, she’s now on a different type of protocol which means she has to stay in hospital for five nights and six days every three weeks. The good thing is that even though the sessions are now longer and harder, we can share the time, swapping out every 48 hours to be with her. She’ll need an operation again at the end of it and perhaps a temporary colostomy bag but like last time, we’re taking one day at a time.”

In the meantime, Clare and Mike are focussing on keeping Emmeline happy and raising funds to help other families in similar situations.  Mike recently signed up to the Noah’s Ark charity cyclothon and has already raised over £400! Although Mike, by his own admission, isn’t the most physical type, when he saw the notice about the event on Twitter he thought it would be a good place to start for his first ever charity fundraising attempt. He is doing the cycle on an exercise bike at home as the family are still semi-isolating while Emmeline remains immunosuppressed  and at risk of infection. The couple’s eldest daughter, Julia, is helping with the training which is going well.

Clare says: “We knew that the Noah’s Ark Children’s Hospital existed before Emmeline became ill but, like most people, we never really thought about how much goes in to it and assumed it was funded entirely by the NHS rather than part funded by the donations made by ordinary people.  The staff here are amazing and we’re in absolute awe of them all.

Everything is geared around the needs of a child, both physically and emotionally to make sure that Emmeline doesn’t fear coming here and having treatment.  It isn’t always easy to entertain an active toddler who’s wired to a drip but the play team work so hard to engage Emmeline with different things. Emmeline has quickly won over the hearts of the nursing staff who even let her sit at the nursing station with them! Emmeline has just finished the second cycle of a potential six and is progressing positively under the care she receives in the hospital.”

To find more about the Cardiff Cyclothon click here.  The event closes for entry on the 20th of June.