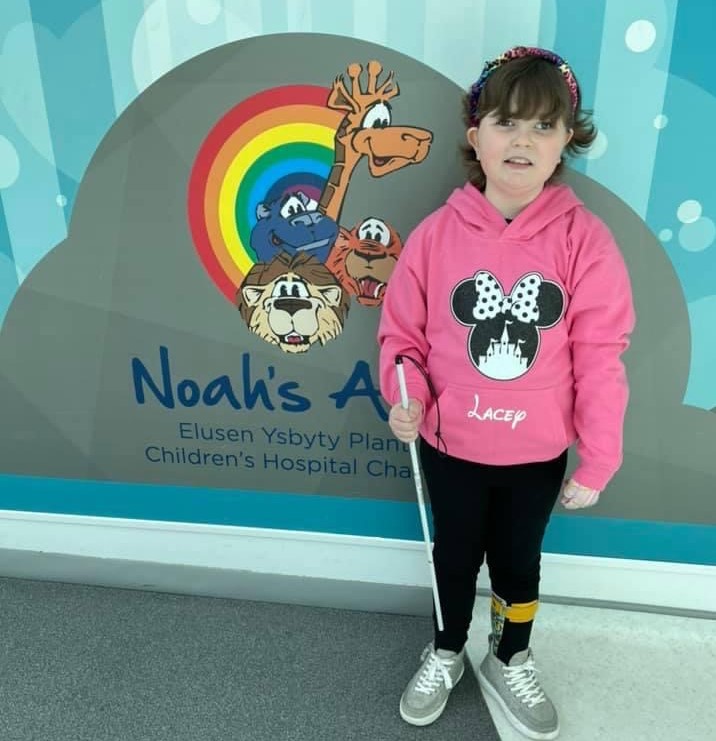 Lacey-Mae is a bright, happy and generously spirited ten-year-old. She’s also known to be very determined –  a trait her parents, Rob and Donna, have become very grateful for over the last six years. That’s because Lacey-Mae has had to endure a great deal in her short life and, despite it all, she’s still smiling.

Life changed dramatically for Lacey-Mae and her family when she was four-years-old.  Having only had the odd common childhood illnesses up to that point, out of the blue, Lacey started to vomit and complain of headaches.

Noticing that she had also started to trip over and bump into things, Rob first thought that Lacey-Mae had inherited his bad eyesight and took her to the optician to be checked. But on both that and a subsequent visit, Lacey’s tests came back normal. The family doctor couldn’t find anything wrong either but agreed to make a referral for further checks.   In the meantime, the headaches and vomiting were getting worse and one night, desperate at hearing his daughter scream in pain yet again, Rob took Lacey-Mae to the emergency department.

Rob says: “At that point, I was half expecting them to turn me away as a neurotic dad, so what did actually happen over the next few hours sent me in to complete shock.  Within an hour of us being there we were told that our daughter had a brain tumour and needed urgent surgery to relieve the pressure caused by fluid build up inside her skull.  They said that, had I not bought her in when I did, she would not have survived the next day.”

The surgery to drain the fluid was a success and Lacey-Mae was admitted on to PCCU to recover.  It was there, still feeling numb from the news,  that Rob and Donna were told that Lacey-Mae would undergo a second operation to remove as much of the tumour as possible before starting chemotherapy.  The tumour, an extremely rare kind called a pilocytic astrocytoma, was sitting on Lacey’s optic nerve.  The surgery was vital but there was every chance that it could trigger a stroke or complete blindness. Left with no other choice, her parents signed the consent form.

Lacey’s surgery was successful in removing most of the tumour but sadly, it did cause a stroke that effected the left side of Lacey-Mae’s body. It also left her unable to see and she spent many weeks on Owl ward confined to her bed.  At one point, Rob and Donna were told that Lacey-Mae may not ever regain her sight or sit unaided again, yet alone walk. 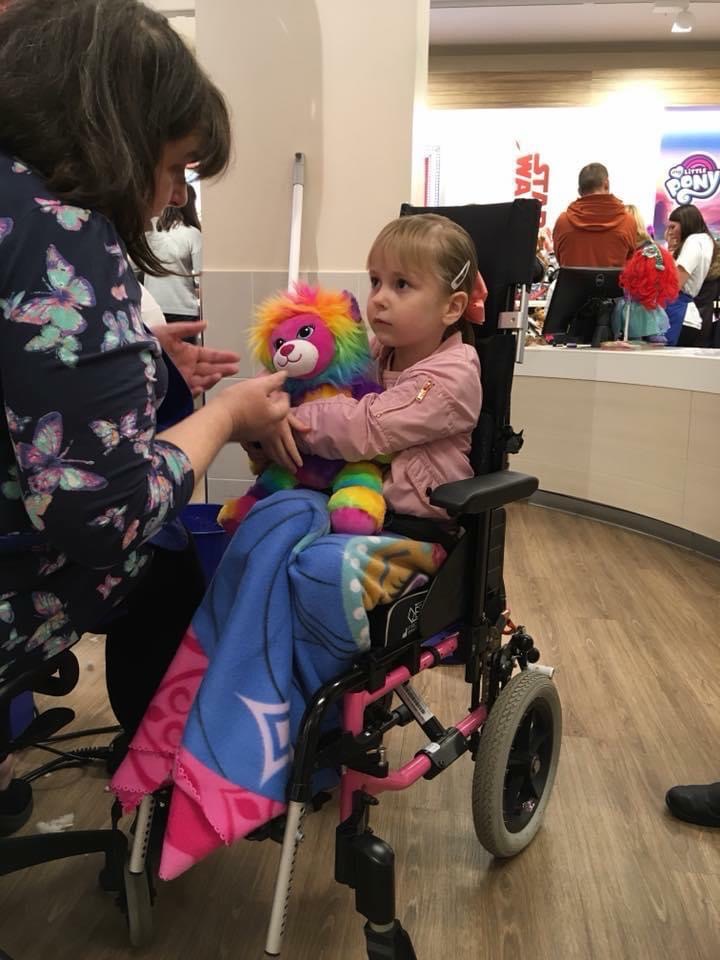 But Lacey-Mae had other ideas.  Determined to go home as soon as she could, the four-year-old, who wasn’t even quite old enough to even start school yet, made it her mission to walk again. Despite starting a year’s course of chemotherapy at the same time, Lacey took to her intense programme of rehabilitation with great enthusiasm.  She started to gain the strength back in her legs and part of the vision in one eye. After 17 weeks in hospital, Lacey-Mae finally completed the challenge set to her by her physio team – to be able to walk up and down the stairs unaided.  She was allowed to go home to complete her chemotherapy as an outpatient.

Excited to start school and return to some normality, Lacey-Mae started reception class with her peers, albeit a little late and with adaptations to support her with her restricted mobility and sight. At the end of that first year of chemo, the remaining part of Lacey-Mae’s tumour had shrunk and appeared stable. They were told that it could be years until the tumour returned, if at all, and Lacey-Mae rang the end of treatment bell.  Sadly, exactly two years to the day from being given the all clear, a routine scan revealed that the tumour had grown. Lacey-Mae embarked on another year of chemotherapy at the age of seven. 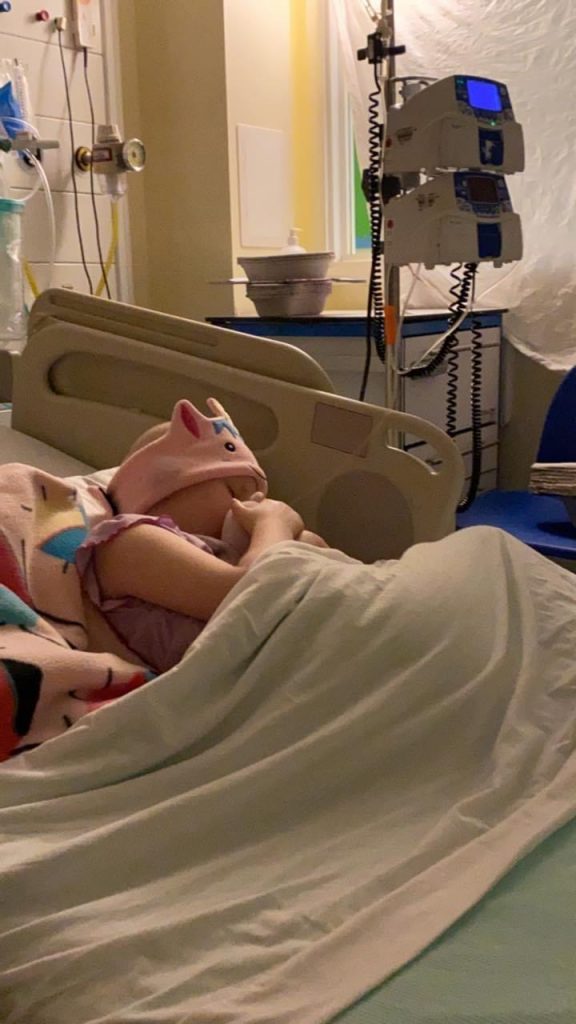 This time the family were more prepared, though watching Lacey-Mae endure the treatment and its side effects was no easier for her mum and dad. This time around, Lacey also spent a very frightening few nights on the paediatric intensive care unit after developing an infection in her toe.  Rob says that it was touch and go for a while but Lacey pulled through and in what seemed like no time at all, was asking to go back to school again.

Once again after a year of treatment, the tumour had shrunk and stabilised and life without chemo gave the family a degree of normality.  Despite having missed so much school, Lacey had caught up with her peers and had learnt to read braille and walk completely independently with the aid of a stick.  She also insisted on learning to swim alongside her fellow pupils when they had lessons together in the local pool earlier this year.  With the support of her teaching assistant, Lacey progressed from one to one sessions in the shallow pool to joining her friends in the big pool within two weeks!

After two years of stable scans, Lacey-Mae’s tumour has grown again. More brain surgery is considered too risky for Lacey at this stage so this week she started her third course of chemotherapy.  Dad, Rob, admits that the news hit him hard this time as Lacey-Mae is so much older and more aware.  What he knows for certain though is that her positive spirit is what will pull them all through.

Rob says: “Lacey is the one who keeps us all strong.  Yes, she has hard days and can get frustrated by things she’s unable to do, but she always picks herself up and carries on.  There’s no doubt that her own experiences have shaped her personality. She’s got grit like I’ve never seen but she’s also so gentle and emotionally in tune with other people’s suffering. If she sees someone in distress, she’ll put all her own troubles aside to help them. 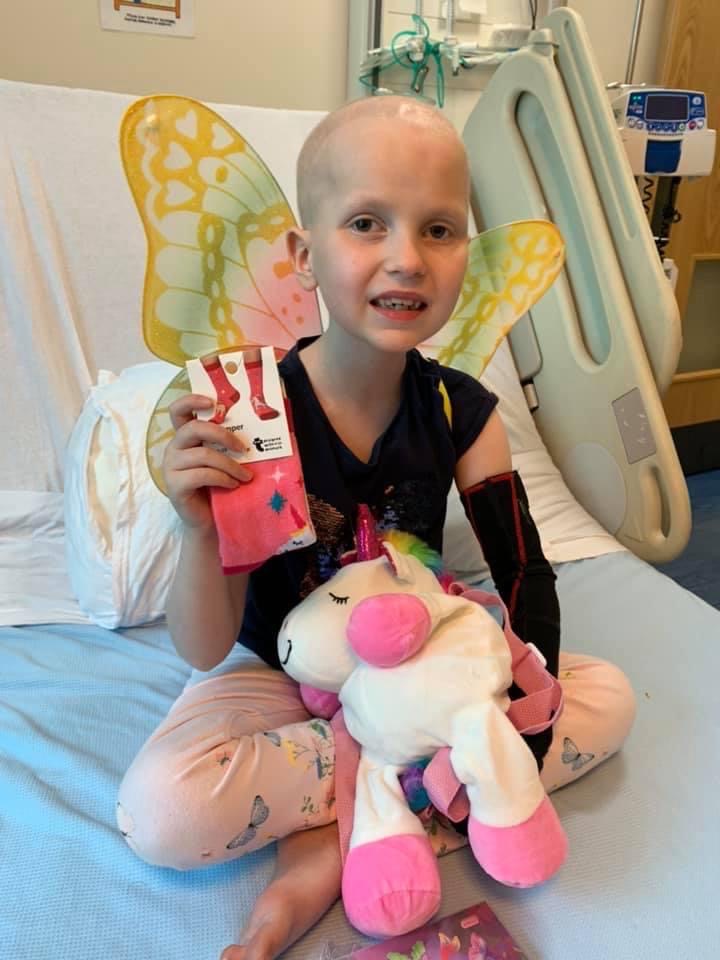 “The children’s hospital has become a very familiar place for us over the past six years and we’ve spent time on every ward.  Despite all the difficult things she’s been through here, Lacey’s never nervous about coming.  It helps that the nurses and play team know her so well so they understand what Lacey needs to get her through the tricky parts.

“Despite all the bad luck, we do feel so lucky to have the children’s hospital so close.  Lacey-Mae’s needs are complex and she needs input from a lot of departments like ophthalmology, orthotics, physiotherapy and oncology.  All those specialisms are here under one roof where they can communicate with each other, which makes it so much easier for us as a family. Over the years they’ve pretty much become our second family and we can’t thank them enough.”

How your support helps 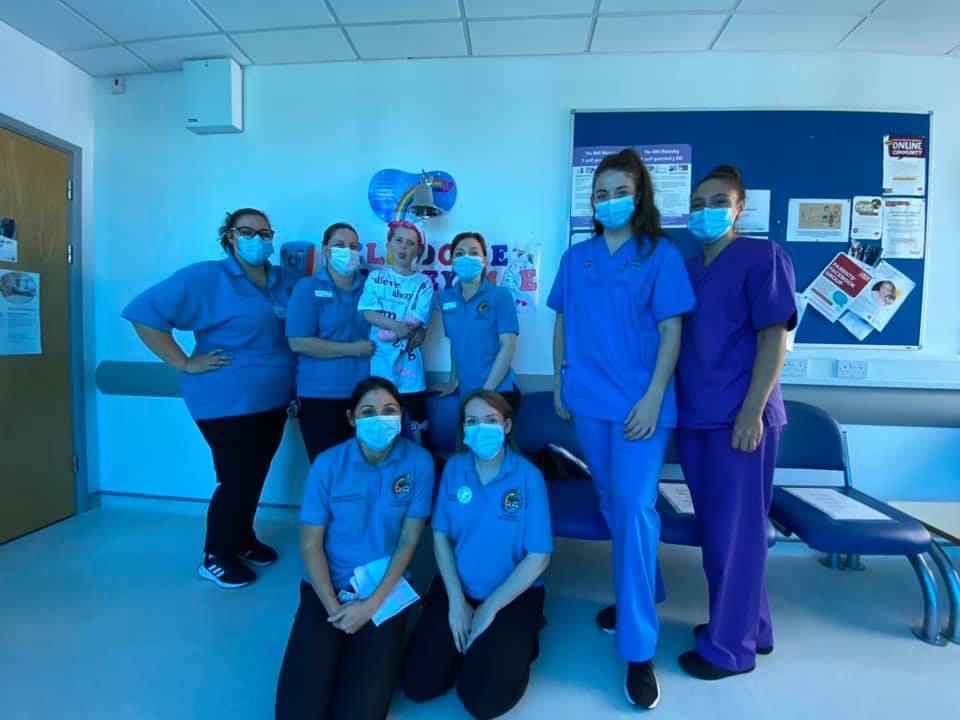 By donating and fundraising on behalf of the Noah’s Ark Charity, you have made it possible for us to fund the theatre suite where Lacey-Mae underwent life saving surgery when she was first diagnosed.  Your support has funded much of the equipment on PCCU where Lacey was cared for after her surgery and a piece of equipment called an AccuVein finder which allows her doctors to access her veins less invasively.

It’s a particularly helpful piece of kit for Lacey-Mae because she’s had her veins accessed many times over the years and they can therefore be tricky find.

You have helped us to fund the fold down beds on Owl Ward where Lacey spent long periods after surgery.  Lacey was also the first patient to use the sensory room there. Because of you, the charity is also able to continue it’s funding of the play specialist service. Rob says the play team have been there for Lacey-Mae from the start and have been invaluable in supporting her along every step of her journey.

To find out more about brain tumour symptoms in children click here.