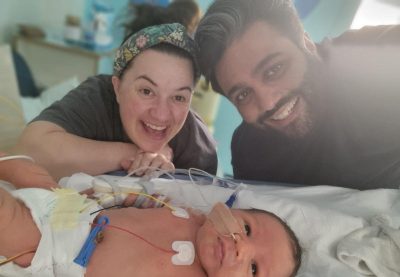 This is superhero baby Miles. He was born with a huge hole in his heart and at only a few weeks old, he’s already undergone open chest surgery. The operation to fit a band around his pulmonary artery will help restrict blood flow to his lungs until he’s big enough to hopefully have the hole closed.

Miles essentially became a Noah’s Ark patient before he was born, when his mum Kelly was put under the care of the foetal medicine team at 20 weeks pregnant. The anomaly scan had picked up an issue with the baby’s heart and they were transferred from their home in Swansea for a more detailed scan.

Miles was diagnosed with a large hole in the heart and a potential coarctation of the aorta but were told that the extent of the problem wouldn’t be known fully until after Miles was born. Kelly and her husband, Gavin, were sent to a specialist hospital in Bristol for the birth and though he arrived safely, he was whisked off almost immediately to the neonatal intensive care to be monitored.  Thankfully ‘coarctation of the aorta’ was ruled out pretty quickly but the hole in Miles’ heart was even bigger than anticipated and further scans also discovered a problem with his aortic valve.

Despite this, Miles initially did surprisingly well and as a result was discharged at only a few days old.  But once home the strain on his tiny body started to show. Miles’ heart was trying so hard to pump blood effectively around his body that it was already beginning to fail. 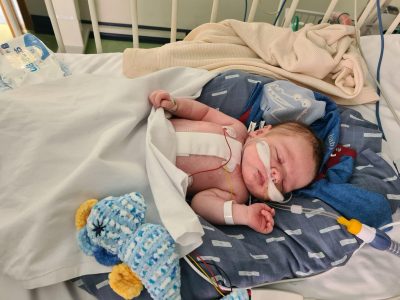 At two weeks old Miles was admitted on to Pelican ward at the Noah’s Ark Children’s Hospital for Wales and was immediately placed on a high calorie milk in an attempt to replace all the energy his little heart was using up trying to function.  The hole in his heart was also causing an excess amount of blood to pump to his lungs, making it difficult for him to breathe. He was put on medication that his clinical team hoped would help until Miles was big enough for surgery to insert a band that would stem the flow of blood.  But Miles’ fragile body wasn’t able to tolerate the new medication and as his condition was continuing to deteriorate, the difficult decision was made to send Miles for surgery as soon as possible.

Thankfully, the operation was a success, but the size of the hole was again emphasised to Kelly and Gavin. Miles’ hole is positioned at the bottom of his heart near the apex which means there isn’t currently enough muscle around the area to close it.  Eventually he’ll need a device fitted to help close the gap, but for the time being he’ll be monitored very closely by the Noah’s Ark cardiology team.

After a short stay in their local hospital following his operation, Miles was discharged home and his recent follow up appointment with the team in Cardiff went really well.  Over the past few weeks Miles has been putting on weight and getting to know his proud big brother Joel and the family have been settling in to a life more like they’d imagined as a family of four. 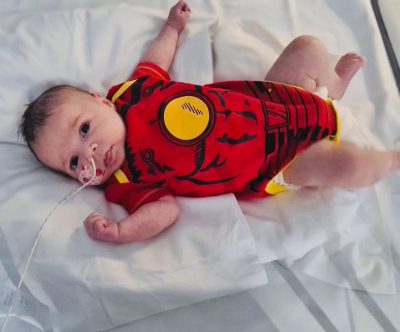 Unfortunately, Miles has recently developed a respiratory virus which, though quite common for babies his age, is particularly dangerous for a baby with such compromised lungs.  The infection progressed into bronchiolitis so, for now, the family is separated once again.

Kelly says: “There’s a lot of worry and guilt involved in having a baby born with such complex medical needs and we feel sad that the start of our life with a new baby feels so different this time around.  It’s so true that in hard times like this that you seem to find a strength you never knew you had and despite everything we feel so lucky to have such a skilled medical team around Miles. They’ve all been amazing and they go above and beyond both to look after Miles and us as parents.”

If you’d like to help us support more little superheroes like Miles, why not sign up for our Superhero Dash this September the 25 in Pontcanna Fields in Cardiff?  You can run, wheel or walk and all the money you raise will go to supporting children like Miles and many others like him.