Four-year-old Tommy was a resident on Jungle ward for more than three months, after being struck down with encaphalistis a few days in to the new year.  He was half way through a nero-rehab programme when Covid-19 hit and for his own safety, Tommy was sent home to continue his recovery there.

This is his story….. 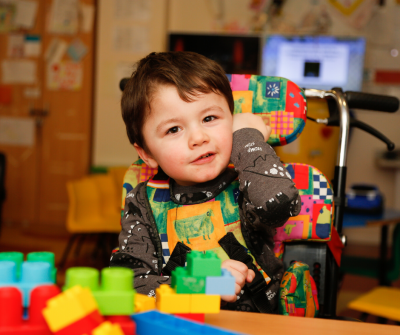 On the 6th of January, Tommy was at home, excited at the prospect of going back to school the following day after the Christmas holidays.  Bed time came and went as normal but as she headed to bed herself a few hours later, mum Kelly heard a noise coming from Tommy’s room and walked in to find him having a febrile convulsion. Tommy was rushed to the nearest A&E department where he was taken directly to the resuscitation unit and then for a CT scan. By this point, thanks to the medication given to him by the paramedics, Tommy had stopped convulsing but was unconscious. Later on the high dependency unit he tested positive for Influenza A and his parents were advised that this, together with the high dose of diazepam administered to stop the seizure, could possibly be the reason why Tommy was still unresponsive.

But as the days passed with no improvement, Kelly became certain that there was more going on and was relieved when a decision was made to refer Tommy for an MRI.  By this point Tommy was waking occasionally but only for a few moments at a time and was still glazed, uncommunicative and seemingly unable to move. The MRI revealed that Tommy was suffering from encephalitis and on the 14th of January, the family were moved to the Noah’s Ark Children’s Hospital for Wales.

Kelly says: “When we arrived on Jungle ward, our new consultant and the neuro-rehab team were already waiting in our room ready to tell us what would happen next. Within days we’d been introduced to all the people that would help Tommy on his long road to recovery, including speech and language therapists, occupational health and the physiotherapy team.  When we first got here Tommy had only just started saying a few words so the speech and language team wanted to assess his level of understanding.  Thankfully the results were really positive and within only a few days of working with him he gradually started to speak. Tommy was famous for being a chatterbox before the encephalitis so hearing his little voice in my ear again was such a relief.”

The encephalitis had effected the whole of Tommy’s right side which meant that for quite some time his arm and leg were virtually paralysed.  Tommy used a wheelchair and was unable to stand or walk but bit by bit, with the help of the neuro team, he started to regain some strength.  Nevertheless it was tough for the family to see their fiercely outgoing and independent little boy struggling to do the things he used to do so naturally. 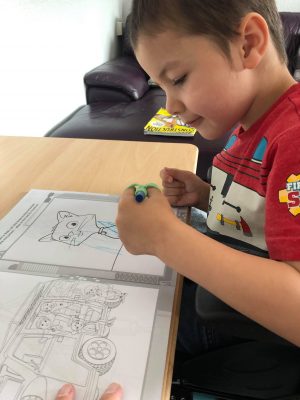 Kelly says: “I think the hardest bit was re-adjusting to the new version of Tommy. We all noticed little things. Like my dad said he missed Tommy’s non-stop questioning of what he was doing and how things work.  He stopped doing that. Even his likes and dislikes changed. Roast dinners are now his absolute favourite where he’d always rejected my best attempts before.

“Essentially though, he’s still the mischievous loving boy that we know and gradually, bit by bit he is coming back to us.  And we’ve still got him which is all that counts. It feels so different now to those first few days after it happened when no-one really knew what was going on and we were left to imagine what awful things the future could hold.

The staff on Jungle ward were outstanding, the neuro-rehab team were out of this world. The physio and occupational therapy input was first class and we literally can’t complain about anything.  Unfortunately we did have 6 weeks left of Tommy’s rehab programme when we were sent home because of Covid-19 but that’s something that was out of everyone’s hands. He stood up unaided for the first time just before we left hospital and is now working very hard to get his naughty left arm to work. We had our first outpatients appointment this week and when he saw Polly the play specialist he asked if he could stay.  He really misses his friends at the hospital and it’s no surprise because they’re all so amazing.”