William’s story – by his mum, Kylie 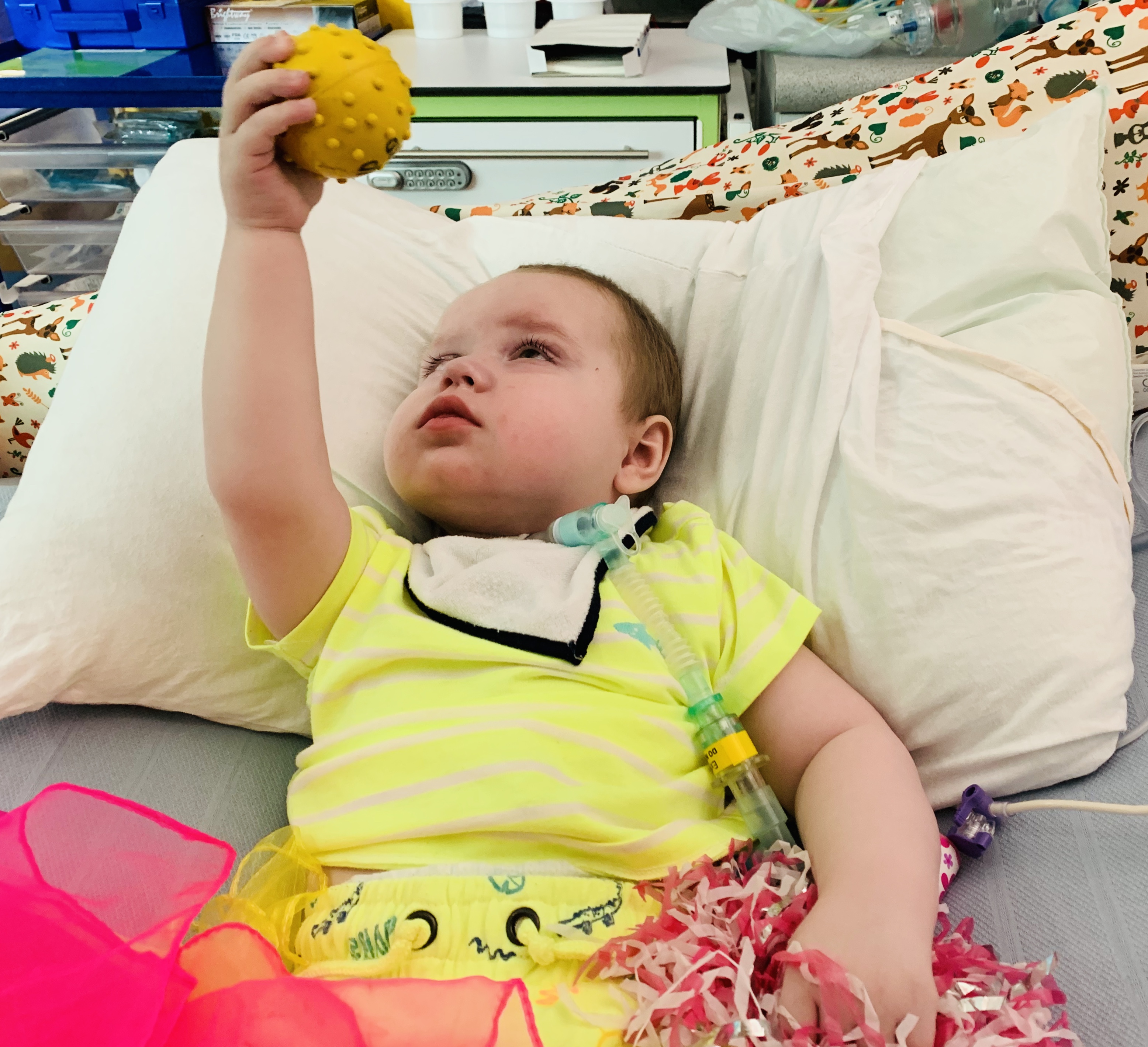 For more than a year now, my son William’s home has been the Noah’s Ark Childrens Hospital  He celebrated his second birthday here and has spent his last two Christmases here too. The reason why is that in December 2019, William was diagnosed with incurable brain tumour.

We noticed something wasn’t right just after William’s first birthday. Up until then he’d been a healthy, active baby.  His best friends were his four siblings, Alfie, Layla, Simon and Jessica and he was a BIG food lover – with the exception of peas, which he would painstakingly pick out of his bowl with his little fingers one by one.

To begin with we noticed that William was holding his head at a tilt. Then, over a period of weeks, he became gradually paler. He also developed difficulty feeding.  I took him to the doctors several times but they couldn’t find anything. But I had this terrible gut feeling that something was wrong. 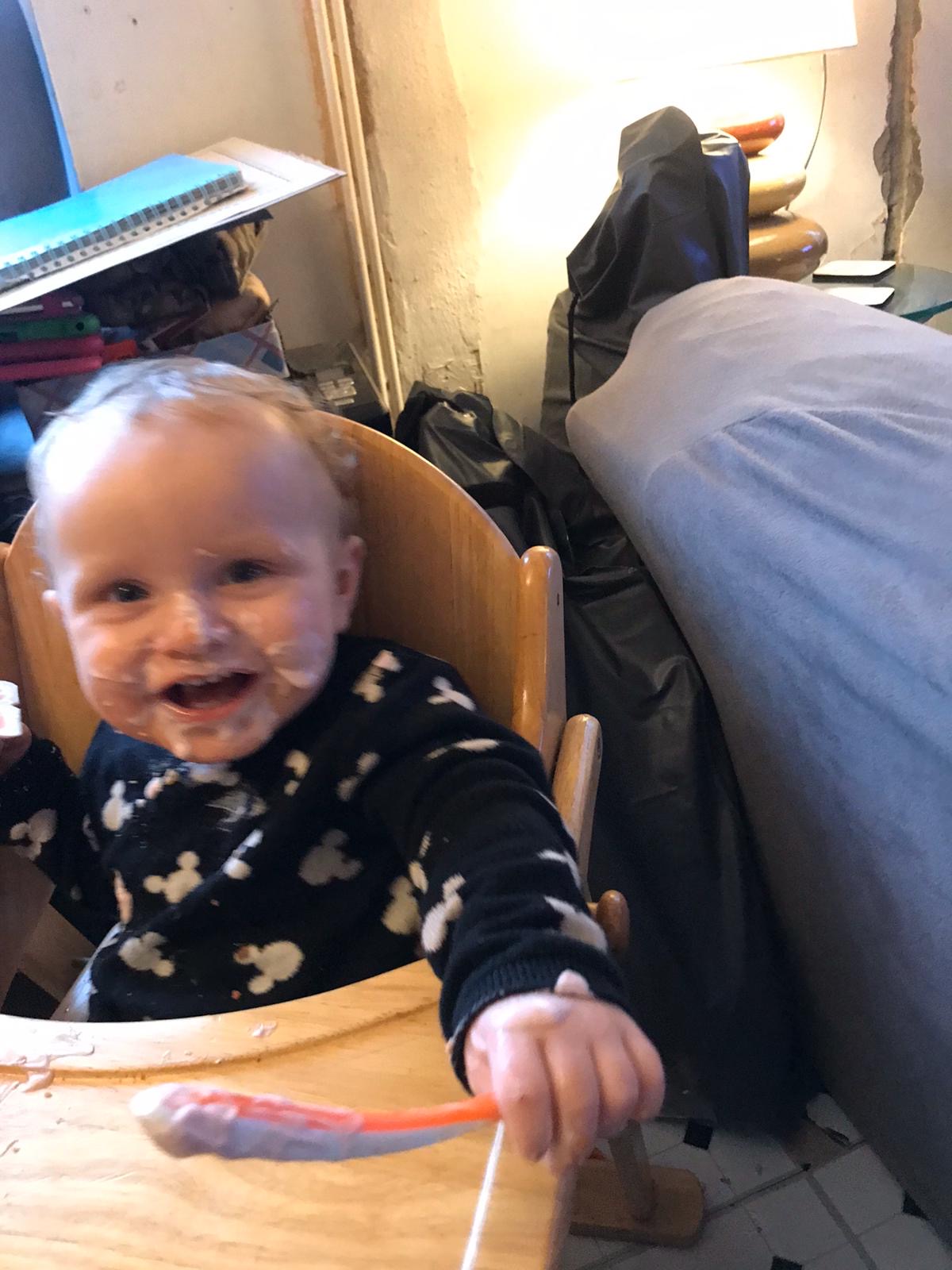 On the day I noticed that William’s nappies had been completely dry all day I called the doctor once more and, having explained his other symptoms again, I was told to call an ambulance. At our local hospital William underwent tests and a CT scan. The initial results showed that William was dehydrated. He was taken to the high dependency unit. My husband Tom arrived and suddenly there were lots of people around us. We were taken to a room and told that our baby had a brain tumour. I felt like the room was crushing me.  William was sedated to keep him stable. It was the last time we saw him as the baby we’d known.

William was put in an ambulance and taken to the Noah’s Ark Children’s Hospital for Wales where he underwent two operations in just a few short days.  They succeeded in removing 85% of the grapefruit sized growth but the biopsy confirmed it as a stage three tumour of the central nervous system called an ependymoma. William was given a life expectancy of three months, extended by around three years with radiotherapy but, either way, with very little quality of life.

It’s actually impossible to explain the emotional pain you feel in a moment like that. No words can do it justice. All I wanted to do was hold William and not let go but I was scared of hurting him or dislodging the tubes and machines he was connected to. He didn’t look like our William, he was attached to a ventilator and still completely sedated. My overwhelming emotion was one of complete panic that just wouldn’t go away.

No-one could tell for sure how and even if, William would recover after brain surgery. Williams’s tumour took away the vision in his right eye, the use of his left side, his ability to suck, swallow and talk. But we knew straight away that he was still in there somewhere. William had always had a strange obsession with belly buttons and after the operation he instinctively reached for his own.  It’s a tiny thing but it gave us hope. 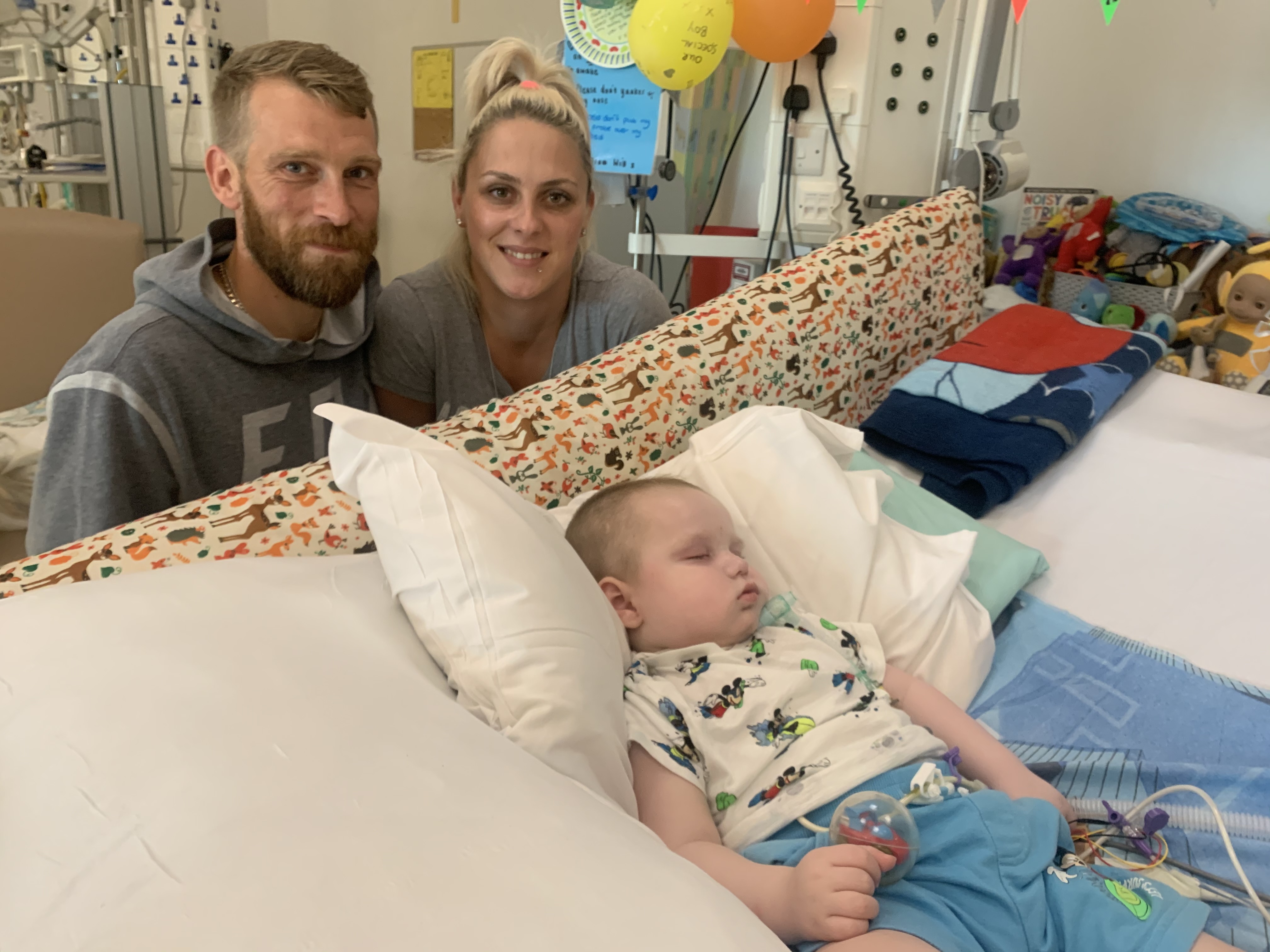 As the weeks went by, we started adapting to the new version of William.  He was taken off the ventilator and put on a far less invasive breathing machine which meant he no longer needed sedation. Slowly he became more alert and learnt to communicate the difference between happy and sad – a body wiggle for happy and the drop of the lip for sad. But after three months we were told that this would probably be it for William, this would be as far as we’d get. For his sake and our sanity, we were determined it wouldn’t be.

In those months we saw a lot of William’s sad, downturned lip.  Intensive care is dark and quiet and it isn’t a place where children are supposed to spend months on end. But William was too ill to be moved. We were all so focussed on treating and stabilising William’s illness that it took us a while to remember that somewhere, locked inside, was the little playful person who still needed the same stimulation as any other child his age. In early February, the amazing nurses referred William to the Noah’s Ark Charity’s Sparkle Fund and the charity arranged for William to receive a visit from Iggle Piggle, one of his favourite TV characters. We did see William’s happy wiggle that day.

In March, three months on from William’s surgery and just past the point where we were gently reminded by the clinical team that we may not see much more progress in William, we met play specialist, Juliet.  By this point, William was very wary of new adults. He was scared and sad and would try to push toys that were offered him away.  But Juliet worked hard at getting to know William, slowly building his confidence so that he trusted her and knew that when he saw her he’d have fun.  Juliet saw the child beyond the illness and by finding things that he could still do, she triggered his interest in the world again. She watched things William watched on his Ipad and, noticing that he loved cars, she encouraged him to use his good hand by playing touch and reward games on the screen.   She then made box of small little objects that he could hold and examine and to everyone’s surprise he started to hold them up to his face to have a look.  One of his favourites was a rubber ball that lit up when you moved it and you could see the obvious enjoyment he got from being able to do that for himself. Very gradually his confidence started to grow. 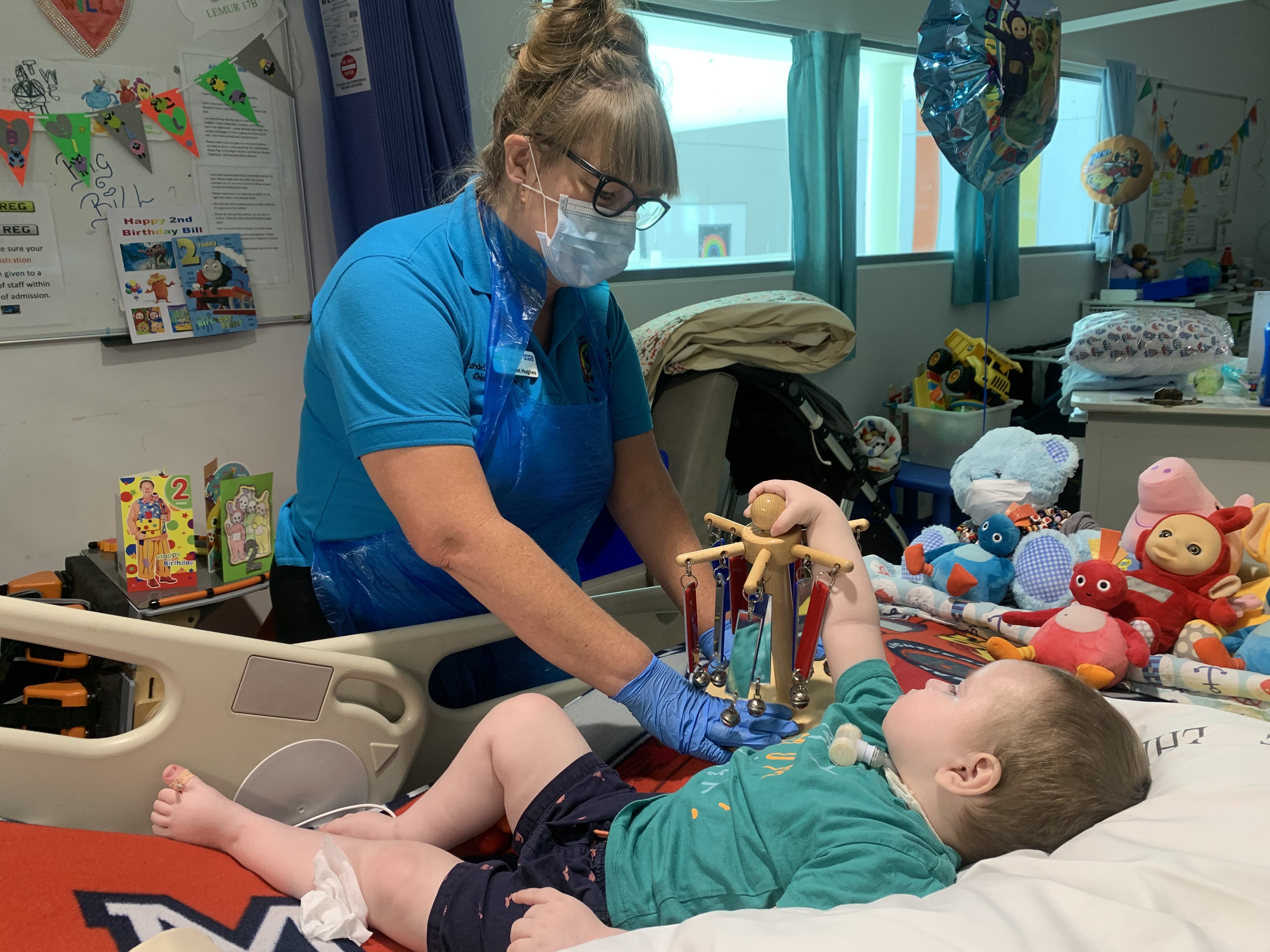 Juliet took away the baby toys that sat un-noticed on his bed and replaced them with age appropriate ones like figures which, like any toddler, he loved to take in and out of their boxes. William played with his good hand but Juliet would gently encourage him to use what she called his ‘sleepy hand’ too and slowly he has started to use it a bit. The CPAP machine allows William to move a little more and he’s now started to reach up and look for things, which in turn have strengthened his arm and neck control. Juliet has also taught him to communicate ‘yes’ and ‘no’ which has opened up a new way for William to tell us what he needs. More than anything though, she’s given William back some happiness and seeing that in his face again is worth more than anything.

Right at the start of this journey we were told that the chances of William coming off the ventilator yet alone going home were very slim. But slowly, thanks largely to the care that William has received here, those odds are beginning to change.  The nurses and play team have helped William re-discover his interest in the world again and that’s played a vital role in bringing him on.  The CPAP machine that William was gradually weaned on to can be tailored to his needs at any given time. The nurses set it to lower pressure at points to encourage him to breathe more independently but it can also be increased quickly too. William’s sats can drop very quickly if he’s particularly excited or upset so it’s vital that we can respond quickly when that happens. The CPAP machine is also something that he could have at home when the time is right too. 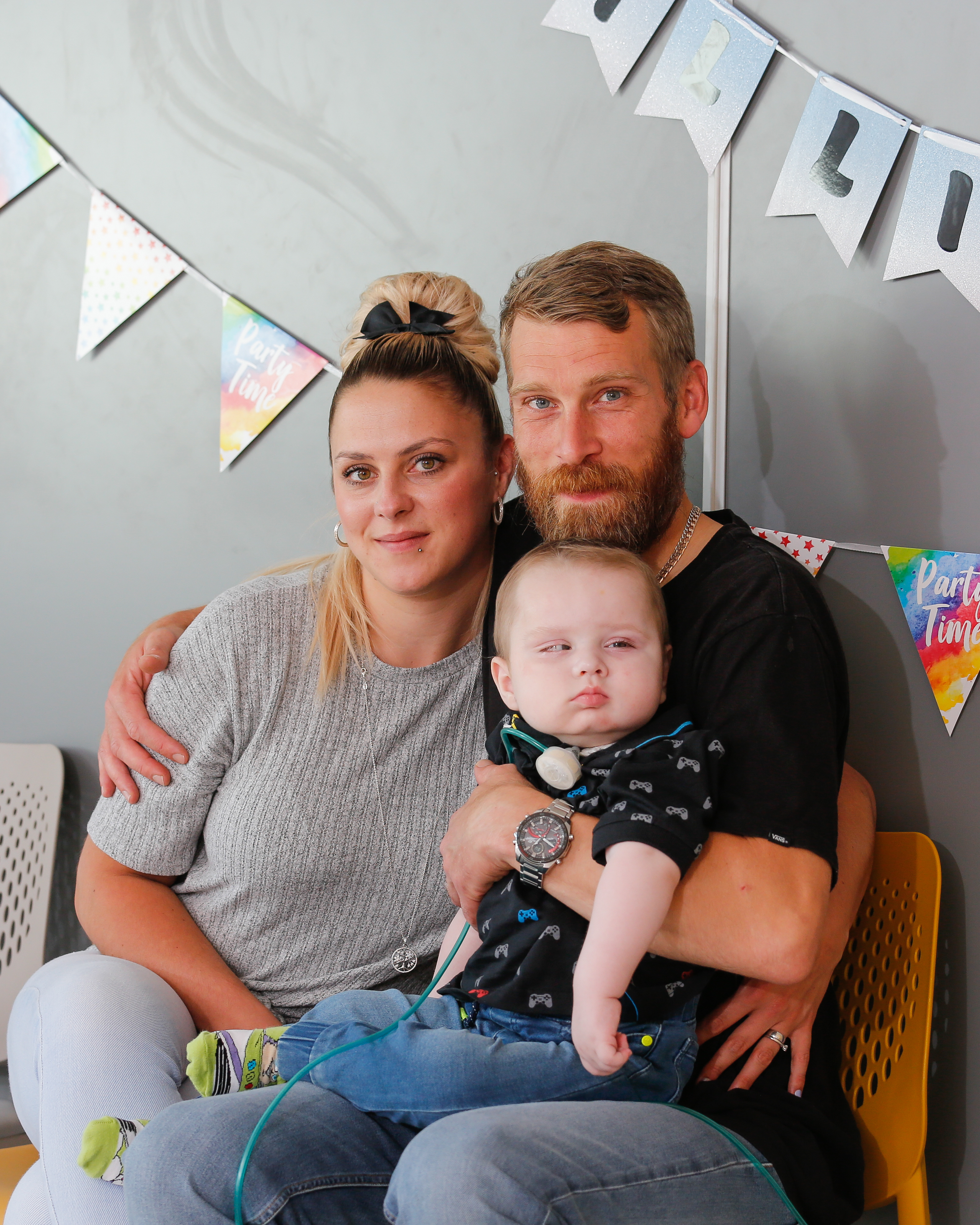 After eight long months William was moved down on to Island ward and it’s here, with a little help again from the Noah’s Ark Charity Sparkle Fund, that we celebrated his second birthday. If the version of me from a year ago could have known that this is where we’d be now, I don’t think I could have coped. But William and his journey has given me this strength that I didn’t know I had.

I first met William in March, right at the beginning of lockdown.  His Mum and Dad were trying to cope with William’s diagnosis, caring for other kids at home – and with all the COVID-19 restrictions coming into place. William himself was withdrawn and worried.

It’s crucial I build a good relationship with all the children I work with but it was essential for this little boy, who had already been through such a traumatic time. Being emotionally upset destabilises him physically, so I had to be someone he recognised as bringing him fun. Play is such a simple thing but it has unlocked so much for William. And I think that’s really helped his mum Kylie too, because structured play has given her back some control of her son’s condition, it’s a positive way of interacting with her little child.

I have to say, working with William these last few months has been an incredibly rewarding experience. I’ve seen a big change in him, he’s learned to relax, engage, learn, communicate and reach his potential despite his awful circumstances. 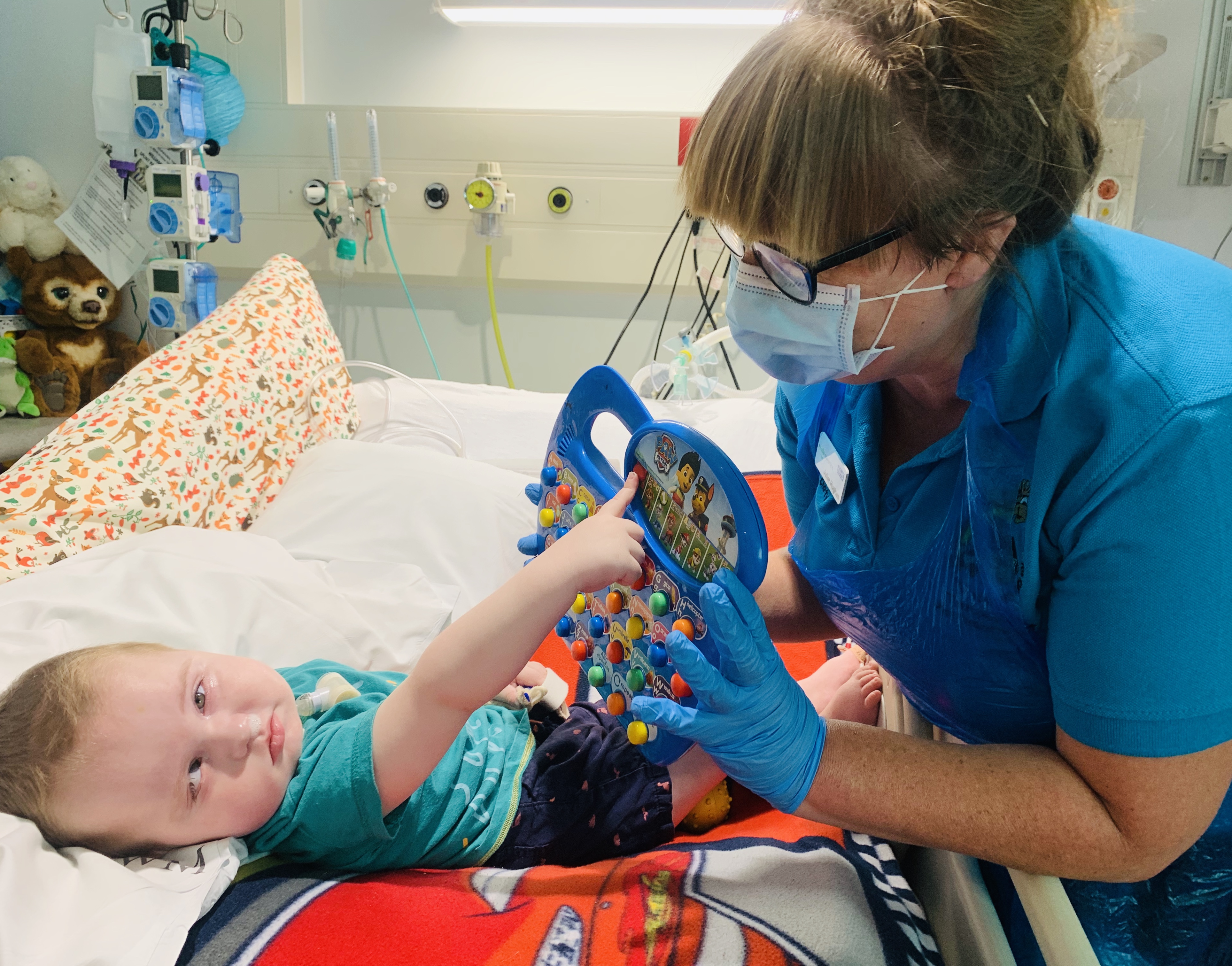 My work with William and all the other children staying here at the hospital is funded by the Noah’s Ark Charity. I know this is me saying it, but the time we spend with these little ones really is incredibly important – and they would lose so much if we weren’t here. Funding will help me and my colleagues to find the lost sparkle in other children like William. Already, he’s come on so much from the baby I first met back in March; I can’t wait to see what we can achieve together next!”

After 14 months in hospital, William is now home with his family and doing very well.